Xuan And The Girl From The Other Side 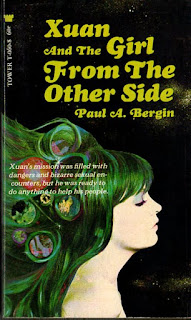 Xuan And The Girl From The Other Side, by Paul A. Bergin
No month stated, 1969  Tower Books

Let’s take a moment to appreciate that goofy cover blurb. Goofy as it is, though, it does sum up the porn-meets-science fiction vibe of Xuan And The Girl From The Other Side (hereafter just “Xuan,” for reasons of laziness). The 1969 publication date fooled me into thinking this would be a softcore sort of thing, but no; the novel’s nearly as explicit as the Baroness or Mind Masters books, only here the sex scenes just go on for a few paragraphs instead of a few pages.

Taking place sometime in the 21st Century, the novel is set in a United States greatly transformed by the “Continental Wars” that raged a few generations before; we’re told the last one was in 1986, after which the US was split into two warring factions: Omega and Telix. Our heroes are the Omegans, who are sort of like post-hippies in that they’re into peace and love…not that it stops them from killing in cold blood and waging endless warfare against Telix.

We never get much detail on the Telix people, but we’re told their government is cold and cruel and rules its populace with an iron fist. At any rate they’re clearly set up as the villains, and as the book opens the Telix bastards are preparing a massive assault on the Omegan capitol headquarters – which, author Bergin unsubtly lets us know, is actually the White House, even though the current occupants don’t know it by that name, or indeed even know its history.

A guy named Danais is in charge of Telix, but only temporarily; Xuan is the true leader, but he’s left to infiltrate Telix territory in a desperate gambit to get new weaponry from Basil, an Omegan scientist who went over to Telix lands for more research and has gone missing. Danais knows that the Telixans are about to strike, but this doesn’t stop him from more important pursuits – the novel opens with the first of many gratuitous sex scenes as Father, the elderly security chief of the Omegans, brings Danais a young woman named Nadine, who has somehow gotten past Omegan security and wants to join the cause. After a few lines of dialog, Danais and Nadine are screwing right there in the Oval Office.

Meanwhile Xuan’s driving into Telix territory, where he hooks up with his contact. You guessed it, she’s a gorgeous gal whose ready to “give herself” to the cause, if you catch my drift…cue another sex scene, mere pages after the first. But wait, there’s more. After a full night of shagging, the contact, Miki (though Bergin goofs and actually writes “Mike” several times, thereby giving the scene a whole ‘nother interpretation), brings in her teenaged sister, whose never been with a man, and asks Xuan if he’d mind, uh, breaking her in.

Basil turns out to be detached from the war effort, wanting to live in peace. Years ago he was literally emasculated by the Telix bastards, and Xuan uses this fact to reinstill a fighting spirit in the scientist…in the strangest, most insulting way possible: he screws Miki right in front of Basil, and then her sister as well! Basil, who watches it all with mouth gaping and eyes popping, announces that his fighting spirit has in fact been restored, and he goes about creating the ultimate weapon.

This turns out to be a bazooka-like device that emits blasts of sound waves. During his eventual escape from Telix, Xuan has opportunity to try it out a few times, his victims melting beneath the assaults. Xuan by the way is one hardcore bastard, which is strange given that we’re told the people of Omega are peace-loving; during his escape, he flat-out murders an innocent Telix civilian, some dude who has nothing to do with anything, just so he can steal the poor bastard’s car. Even Johnny Rock would’ve just knocked the guy out.

The attack on Omega HQ goes on, not that it stops Danais and Nadine from having impromptu bouts of sex. But the sex isn’t always fun in Xuan; late in the narrative comes a thoroughly disgusting and despicable sequence where Nadine is captured by Telix soldiers and raped over the course of a few detailed pages. And wouldn’t you guess, she eventually begins to enjoy it!

To his credit, though, Bergin follows up this loathsome scene with another which spotlights the novel’s goofy nature, where Nadine is taken to see the leader of Telix, who happens to be a dwarf. Turns out the dwarf is into sick games, and starts acting like a tantrum-throwing child so Nadine will whip him! Nadine takes this deus ex machina opportunity to strangle the life out of him. (Not that this scene salvages anything…there’s another unpleasant rape scene shortly after this one, this time Xuan’s girl getting it, and again it goes on and on in detail, as if placed there so the author and publisher could cover all the sleaze bases.)

It’s funny that the titular “Girl from the Other Side,” who according to the back cover blurb is the one who changes Xuan’s mind about things, doesn’t even appear until the final quarter, and offers nothing to the story. In fact I can’t even remember her name. Anyway she’s another Telix rebel who has sex with Xuan immediately after meeting him, then escapes with him to Omega HQ with the sound weapon…where as mentioned above she eventually gets raped. Bergin then wraps up the novel in a page or two, Xuan blowing the invading Telixans away with his sound cannon. The end.

Yeah, the book sucked.
Posted by Joe Kenney at 6:30 AM

Sorry to butt in old bean, but I've just nominated you for a Liebster Blog Award...

Jack, thanks a lot, I really appreciate it! Also, this marks the first time I've ever been called "old bean," so thanks for that, too!