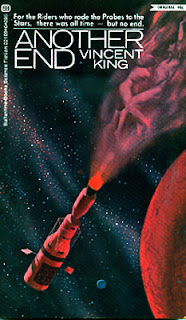 Here’s a psychedelic sci-fi novel that had so much potential. Vincent King appears to have taken the final section of Kubrick’s 2001 as inspiration, where a lone astronaut voyages “beyond the infinite.” The first quarter of Another End is very much in the same mold, really far out, really great, before the whole thing collapses into a grating exercize in pretensionsness.

The novel occurs in the far future – like, the really far future. I think more time passes in this novel than any other I’ve read; King will jump entire millennia in the span of a sentence. Our protagonist, Adamson (actually refered to as “the son of Adam” on the back cover), is a “Rider,” an astronaut from far-future Earth who has been chosen to voyage throughout the Milky Way in search of alien life.

Adamson is alone in his ship, the Probe, a sentient craft which is capable of repairing itself and gains its power from the stars. The Probe is actually the most memorable character in the book…sort of a HAL-9000 with a bit more compassion. I failed to get an idea of what the Probe actually looked like, though; King’s descriptions of characters are a bit vague at times. At any rate, the Probe is big enough for Adamson to walk around in, looking out at the cosmos and pondering man’s eternal quest and whatnot.

That is, when Adamson isn’t being dissolved and rebuilt in the Dissolution/Reconstitution chamber. In a process never fully described, Adamson is granted immortality by actually being melted down into some sort of protozoic ooze, before being regenerated into flesh by the Probe. This is done during “boring” portions of the voyage where he’s not needed, or perhaps during times when the Probe must enter into super-high speeds, I guess the inference being that Adamson’s mortal body couldn’t withstand the pressure.

This obviously adds a surreal and bizarre touch to the novel, especially when Adamson will be in his dissolved state for several thousands of years. While he is dissolved, the Probe puts Adamson in a dreaming state, where during one psychedelic sequence – which completely foreshadows Inception -- Adamson comes to consciousness within his dream and discovers he is in limbo, his sole companion a woman he names Laura. Together they build entire cities, until Adamson realizes it is all a dream and he must kill himself within it to get back to reality. (Exactly like in Inception!)

All of this – an entire novel’s worth of plot – is over and done with in the first twenty pages or so. Adamson, having voyaged with the Probe for a million or so years, is going insane: they’ve discovered no aliens, and word has not reached him that any other Riders have met any. Boredom and rot have set in upon his mind, and he is stricken with guilt over having killed Laura in his dream world. But when all hope seems lost Adamson and the Probe encounter Protia.

This turns out to be an amorphous (but female) entity from the Andromedan galaxy, a being which communicates telepathically and so, within a few seconds of meeting Adamson and the Probe, has plundered the full depth of human history – indeed, this is why she names herself “Protia” for them, after the mythic shape-shifter Proteus. For Protia too is a shape-shifter, and assumes a host of guises throughout.

This first meeting of man and alien is ruined when Portia realizes that all those “entertainments” she picked up via radio waves in space, beaming her films of WWII and Vietnam and etc, were actually real events in which people died. Realizing humankind is violent and savage, Portia refuses to speak to Adamson, and hovers in a corner of the Probe (her ship is crashed). Meanwhile Adamson goes back to his Dissolution chamber…and several thousand more years pass.

When “the Call” comes for all Probes to return to Earth, the Probe turns back…the mission has obviously failed. Again, we’re not even halfway through yet. Instead of continuing with his (more compelling) tale of millennia-spanning interstellar travel, King now turns his hand to satire and spoof, and the book drops dead.

Thead chases after our heroes throughout the galaxy, and it gets to be repetitive. Other than a memorable scene where Portia investigates a massive ship which holds several deactivated Probes – their Riders having killed themselves to escape immortality – the novel takes on more of a satirical, goofy touch, and the millennia-spanning, psychedelic touch of the opening quarter is lost.

King was a British author, and writes like it…Another End has that same clinical feel to it, with characters talking at one another instead of to one another. I know he achieved a cult sort of fame in the UK with Candy Man and the bonkers-sounding Time Snake And Super Clown (which I don’t believe was published in the US), but I think for me this will be the first and last of his books I’ll read.
Posted by Joe Kenney at 6:30 AM

The Probe, jam tossing and pantless fighting... all in a novel titled Another End? Freud would have a field day.

Damn. That one sounded awesome until it sounded like crap.