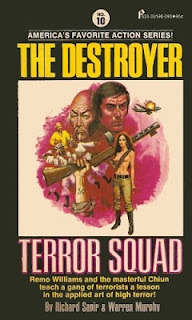 I haven’t read a Destroyer novel since I was a kid, back when the now-forgotten film version came out in 1985. I know I had the novelization of the film, which I read, but I also had a few of the then-current volumes in the series, but I don’t remember which ones. At any rate, I know they weren’t my cup of tea, given that I was more into Phoenix Force and The Executioner at the time; I wanted to read about terrorists getting blasted to bits, not a warped spoof featuring a disinterested protagonist and his soap opera-addicted mentor.

But the other week I lucked into about twenty volumes of the series, ranging from this tenth volume on through to #73, which should give me a good indication of the series’s evolution over the years. What’s most staggering is the Destroyer series is still around; though it hasn’t been published since 2008, series co-creator Warren Murphy is still out there and supposedly trying to find the series a new home. It also appears that he’s made the majority of the installments available as eBooks.

Terror Squad though comes early in the series run, back when it was published by Pinnacle and series creators Murphy and Sapir were still writing the books together. By this point they’ve figured out the series vibe, which is a mix of satire, spoof, and action. My feeling though is that the comedy outweighs the action here; in fact the very few action scenes are barely described, and there’s little tension or suspense because the heroes are presented as such invincible fighters.

Remo Williams is the titular “Destroyer,” a former New Jersey cop whose death was faked so he could be reborn as the sole enforcer for CURE, a super-secret US agency which is overseen by Dr. Harold Smith. Remo’s mentor is Chiun, without question the highlight of this series, a wizened and world-weary Korean martial arts guru; the master of Sinanju, which apparently is the ultimate form of martial arts, though only known to a handful. By this tenth volume, Chiun feels that he has so properly trained his pupil that Remo is nearly “perfect,” and is grooming him to become the eventual master of Sinanju.

The novel is more comedy than action, which makes the brutality somewhat unexpected, lending Terror Squad an uncertain tone. The threat this time is an international army of terrorists which has abruptly sprouted up, hijaking planes and murdering people around the world. The novel opens with one cell hijacking a plane, during which they repeatedly rape a woman and then murder her baby.

After this horrific scene the novel settles down into extended bouts of banter between Remo and Chiun as they go off on a low-key search for the terrorists. Strangely, the terrorists in the opening scene are never mentioned again, so there’s no retribution. Instead Remo and Chiun head over to a college campus in New York from which this new terrorist army either trained or gathered new members.

In a coed-frequented bar Remo encounters Joan Hacker, a pretty blond who turns out to not only be filled with revolutionary fervor but also knows members of this terrorist army. This plot turns out to bear the brunt of the narrative; rather than traipsing around the world, taking on this international terrorist army, Remo instead hangs out here in New York, following Joan Hacker around and taking out the few assassins she sends after him.

Because, coincidentally enough, Joan also just happens to be working with the number one man behind the terrorist army, an “Oriental” whom the authors keep a mystery until the surprise reveal at the end. Following the man’s advice, Joan gets specific assassins to try to kill Remo – an old man, a thin man, etc – all as part of the mystery villain’s attempt to send Chiun a message.

The action scenes are brief and sparsely described. In fact they’re over in a few sentences, and usually relayed from the point of view of Remo’s victims; we’ll read that Remo rips off a guy’s fingers or something. Don’t expect much “true” action stuff, save for the finale, where Remo engages in a martial arts battle with the mystery man. (Spoiler warning: It’s Nuihc, Chiun’s nephew, who apparently has fought with Remo and Chiun in a previous installment, and who considers himself the true master of Sinanju.)

But really, the entire novel plays out on a humdrum level…Remo following Joan (after sleeping with her, of course, though don’t expect much from the sex scenes either), hastily dispatching the latest assassin (one of whom is an elderly German who once was an SS sadist), and then going back to his hotel to trade banter with Chiun.

Readers of this series know that it’s the banter that’s the true star, though. Remo and Chiun have a great rapport, with Chiun’s acidic whit fairly dripping off the page, and Remo’s lame attempts at comebacks always drawing a laugh. Without question the two leads of the Destroyer are more memorable and entertaining than the average men’s adventure protagonist, but at the same time the series is separate from the genre in that it operates on an entirely different vibe.

Also worth mentioning is that our heroes are friggin’ vicious. Remo doesn’t just kill his opponents, he pulls them apart. One brutal scene has Remo board a plane that’s been hijacked, and after questioning the terrorists he hurls each of them off of the plane! Also there is a nasty undertone in that anyone who finds out about CURE must end up dead. It gets to be that you feel sorry for the villains, in particular Joan Hacker, whom the authors portray as a good-natured fool who has gone astray.

Anyway, I wasn’t blown away by Terror Squad, but I enjoyed it enough that I’m happy I have several more volumes of the series to read.
Posted by Joe Kenney at 6:30 AM

I've tried to get into this series several times and never could. I always felt that the writer was sort of laughing at his readers but the real joke was in the lack of a gripping story. I love books being fun but have never cared for those that make fun of the genre they're part of, especially when they're not as good as the ones that play it straight. It's as if the writer is smiling and winking at me as I read. Sometimes writers outsmart themselves.

Thanks for the reviews of the Narc books, Joe. Great series. I'm three books in and they keep getting better. His POE MUST DIE is really good, too.

Thanks, Peter, for leaving a comment. You've summed up my own feelings. I agree, I prefer these books when they aren't so obviously trying to be "funny." It's so much better when they're played straight, but can still be read both ways -- as a legitimate example of the genre but also as an OTT spoof of it. But such books are few and far between...the TNT series by "Doug Masters" would be one, and of course David Alexander's Phoenix series would be another.

Glad you're enjoying the Narc series. I'm about to read volume #4 myself. Olden always delivers a good read, so I'll be sure to look for Poe Must Die one of these days.

I never could get into these back in the day, either, although I recently bought a bunch of 'em just to give them another try. I'm not usually into parody stuff (although I'm fine with funny dialogue), so, we'll see. I know back in high school I gave up after one of 'em - it was the 50th anniversary one, and all I remember about it was Remo throwing some guy 50 feet in the air or something, which hit me as... goofy. :)

I've only read #106, which I found for a dollar outside of a used bookstore and I was pleasantly surprised by how insanely over the top it was. I don't know if the series gets more and more wacky, but it sounds like the one you read is relatively sober compared to "White Water" where, capsized, Remo Williams captures a great white, punches its teeth out and rides it back to land while slowly eating it raw to restore his strength!

One of the problems with The Destroyer is that in later books they made them a third or even a half longer.A format which just couldn't sustain the parody. Not if you have to fill 350 paperback pages.

But Peter is right. This was an action-adventure for readers who didn't like action-adventure. Personally I like some of the earlier efforts, especially seen in hindsight. Maybe because they could still offend today's readers. A novel like Mugger Blood has to be read to believe.

If you like Olden's series, maybe you should look up his kung-fu thrillers under his own name like Giri. They were in the Lustbader mold, but much more readable, more suspenseful 82 and mercifully shorter :-)

I've just found your site and I'm really enjoying it. Do you plan to review any more Destroyer books? You mention being fond of stories with villainess characters, and the destroyer books have some great ones (especially the early books, to around # 25).

Grant, thanks for the comment. Yes, I will be reviewing more Destroyer books -- I picked up several of them the other month, though only a few of them were from before volume #25. Thanks for letting me know the series has villainess characters!

Thank you for answering. It would be great if one of them were # 5, because in many ways it's the "jackpot" when it comes to "Remo vs. the villainess." Even some Destroyer fans are a little embarrassed by the titillation in it (I'm not).
Another great one in that area is # 10.

For some reason I'm having trouble sending messages to you directly, but would you care to actually borrow one of my copies of # 5? It might sound strange, but that's how much I'd like to hear someone's opinion of it, let alone yours. (As I said elsewhere, even devoted Destroyer fans seem to have a sort of middling opinion of it, so you don't hear all that many comments from them.)

Grant, thanks for the comment. Believe it or not, I actually have a review of Destroyer #5 posting next Monday. I enjoyed it, but thought those female villains could've been more, uh, exploited.

By the way, you owe it to yourself to check out the Nick Carter novel "The Golden Serpent," which turned out to be everything I wanted "Dr. Quake" to be. That one was by Manning Lee Stokes, and you will for sure enjoy it -- I'll have a review for that one posting on 12/1.

Thank you. I'm very glad to hear all those things.

Did you know that Warren launched a companion series to the Destroyer featuring his son and daughter?
Legacy series; number seven should be out by Christmas. I co-authored them with Warren before he died in 2015.
My personal favorites are #3 and #6.
Hey, who doesn't like a good Stven Seagal parody? :)