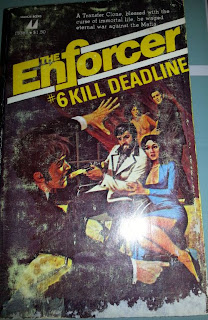 When Manor Books began re-releasing the novels in 1975, they issued each of the Lancer originals with new covers (and in the case of Enforcer #1, a new title – “Caribbean Kill”). My guess is it must’ve been an oversight which prevented Kill Deadline from being reprinted with the rest of the Lancer originals. Anyway, Manor finally got around to it in 1979, four years after the others had been reprinted, and six years after the original Lancer Books edition.

But boy did they screw up with this printing. For one, take a look at that title. They have Kill Deadline as “#6” in the series, when in reality it was #4. I assume Manor was trying to fool people into thinking this was a “new” installment…and also, if you count the Lancer originals that Manor reprinted (Enforcer #1, Calling Doctor Kill, and Kill City), plus the two "new" Manor originals (Bio Blitz and Steel Trap), then this would actually be the sixth volume, at least in order of publication.

Again looking at the cover, you’ll notice something is missing – namely, a byline for series author Andrew Sugar. Manor only put Sugar’s name on the spine, and even here they goofed: see if you can spot what’s wrong in the picture below: 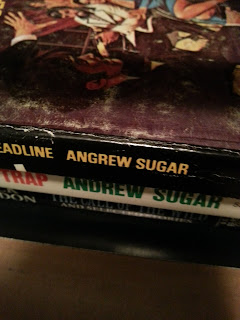 My favorite thing about this Manor edition though is the back cover. Clearly written as an overview of the Enforcer series but written by someone who’d obviously never read a single volume of it, this back cover synopsis makes the series sound like some sort of pulp-horror hybrid: 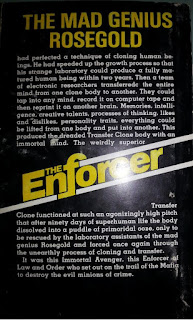 The blurb on the first page is also enjoyable, offering more vague (and misleading) hyperbole instead of the customary excerpt from the novel itself: 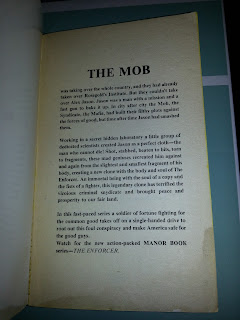 This Manor edition of Kill Deadline is easily the rarest volume of the entire Enforcer series. It took me a long time to find a reasonably-priced copy; what few copies are out there generally start at around a whopping $50 or more. But I had to find a copy…mostly because I really hoped this was some heretofore-“lost” installment of the series, but also because I’m just such a geek about The Enforcer. It’s like my Star Wars, I guess.
Posted by Joe Kenney at 6:30 AM