After the Good War 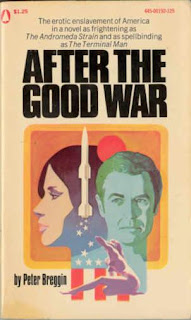 After the Good War, by Peter Breggin
January, 1974 Popular Library

One of the joys of any trash fiction fanatic is scouring the mass market paperback racks at the local second-hand books emporium. I've made countless discoveries of heretofore-forgotten novels this way, and this book, first published in hardcover in 1972 and released by Popular Library with a groovy psych cover in '74, might just take the cake. It's a sterling example of the also-forgotten sci-fi genre which was all the rage at the time: the turned-on psychedelic science fiction that catered to the freaked-out masses of the post-Woodstock generation. That brief time when sci-fi was dangerous, when it reeked of sex, drugs, and rock, before the genre was neutered by Star Wars.

Breggin posits a psychedelic America of the year 2212, a century after the so-called "Good War," when the United States became the supreme leader of the world. At a breezy 200 pages After the Good War dives straight in to this bizarre future society, in which a young man named Rogar and a young woman named Gambol commit the ultimate crime: falling in love. Breggin here delivers a satire, and goes full-on with it: this is a world in which '60s psychoanalysis and the Aquarian Age won, resulting in a sort of psychedelic 1984 in which Big Brother has you, literally, by the balls. For sex is the end-all, be-all in this world; people walk about fully nude save for translucent "packs" which cover their groins, newly-pubescents serve as "Cocksuckers," pubic hair is now called "Public Hair," and one of the highest standings a woman can achieve is to become a "Good Lay."

After the Good War is relayed through the journal-entries of Rogar, a historian who learns the truth of history through Gambol, the first free-thinking woman he has ever met. The people of this future society are molded from birth to become sort of hive entitities; group sessions are di rigeur, the government has total authority, and no one questions anything. Any sort of "odd behavior" results in "capping," in which someone is basically brain-fried. Government authorities cover the area, ensuring that everyone acts as is accepted, ordering unusuals to "free associate" to ensure they are not plagued with "The Hebrew Disease." Yes, even religion has been banned -- the "Hebrew Disase" of "guilt, shame, and fear" having been determined as what caused so much suffering in previous generations.

Through Gambol Rogar investigates the now-obsolete Jews and comes to identify with the Hebrews of the Old Testament. The Hebrews are swathed in mystery, for no Jews live in this future America: they have been gone for decades, and even blacks are kept in zoos, where whites go to gape at them and toss food over the bars which imprison them. Rogar and Gambol in their rebellion are true outcasts, with only one another to console in -- love itself is banned in this world, where pregnant women disappear and no one can remember their childhood.

This future is very much like Logan's Run, only without the enforced lifespan cutoff -- the same sort of retro-futuristic space age vibe of wanton hendonism and psychedelics, where technology is devoted to pleasure and humans live in domes sealed off from nature. The novel alternates between chapters focusing on Rogar's daily life and chapters focusing on the illegal documents he's come across, which tell the truth of history. These historical sections do begin to wear on the reader's patience, but they are necessary to show how this bizarre world came to be.

As the novel progresses, Rogar comes more and more to see himself as "the last American Hebrew" and he and Gambol devise a plan to escape the United States. This denoument is rushed, making one wish the novel was a bit longer; as it is, it seems a simple matter to escape the totalitarian/hive mind regime of America. Also, I have to admit I more enjoyed the sections in the kinky future world; the entire fabric of society is devoted to pleasure, but not in a "free sex" sort of way. We learn gradually that bodyparts don't even touch as the act is performed; an inflatable "bag" is used to separate the man and woman. "Safe sex" taken to an absurd degree, like everything else in After the Good War. This is another reason why I argue that the book should be considered a satire, rather than a "this could happen" sort of 1984 thing.

All told, this is an entertaining novel which could've been a fantastic one if it had been expanded a bit more. As it is, it seems rushed and too preoccupied with delving into the psychoanalytic rigamarole which caused the hive mind world of 2212. This however isn't a surprise, as Breggin is a noted psychiatrist. Despite his academic background, he's a very good author, which again makes one wish the novel had been given a bit more depth.

Here are a few passages, to give you an idea of the psychedelic future Breggin has created:

On my way to see her, National Weather Control was functioning as usual, and I was naked except for my sandals, the transparent Ball Pack around my genitals, and the palm-sized Pleasure Pack stuck firmly to the middle of my chest. I was, of course, appropriately Sealed In with the clear film that Dynamos and Good Lays must spray over their entire bodies. It made my Public Hair glisten in a luxurious triangle rising from within my pop-open Ball Pack and expanding into a great diamond of gray and black curls. (pg. 3)

A slight sickness came over me. A touch of the Hebrew Disease? I should be Obliviating myself in a Fantasy with some little Cocksucker. People have needs, and Love Sucks and Fucks. But going off alone damned near privately, that poses a threat to the entire Democratic bureaucracy. (pg. 9)

So much reading and thinking left me exhausted, but gratified, and I lay back in my contour recliner beside my Q Tube. I found my eyes closing involuntarily; myself hypnotizing me as my lids closed the last slats between me and the light. The darkness burst back into light within my head, and I reclined in a great golden bath, more golden than the most brilliant sun, than all the psychedelic lights going off at orgasm in a Pleasure Dome with a Playgirl; brighter I am sure than the atomic blasts in the Good War that incinerated everyone who Saw the Light. (pg. 34)

When everyone at our Pleasure Party was already high on two-and-three-LSD Equivalents of Punch, a young Good Lay in the corner began hallucinating into the blank Q Tube, and I resolved to take no more than One Quarter dose. (pg. 80)

I inserted my Mental Health Credit Card and watched the Security Monitor flash "Sound Mind, Sound Credit." Then I stepped into the great domed room and stood amid lurid lights, rising aphrodisiac scents, gyrating shapes upon the ceiling and the walls, and electronic orgasms popping through the sound system. The dome itself was an enormous inverted screen, beneath which I would become one small orgasm tuning up to the great environmental Coming. But even the breathing of the diaphragmatic floor beneath my naked feet failed to Turn Me On. (pg. 93)
Posted by Joe Kenney at 8:20 AM

I think I would have preferred the history sections to Rogar’s daily life. The secret book within the book was the best part of “1984” for me.