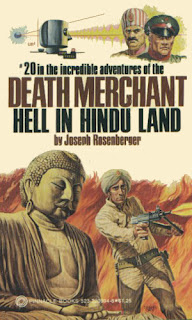 Like I've said before, Joseph Rosenberger had some good days, and he had some bad days. Hell In Hindu Land must’ve been written during one of those bad days; it has more in common with Rosenberger’s execrable Mace series than it does with genuinely-good Rosenberger books like The Cosmic Reality Kill. Like those Mace books, Hell In Hindu Land is nothing but an endless trawl of fight scenes, on and on and on, to such a point that the interesting (and positively sci-fi) plot is lost.

Rosenberger wrote for Fate and other fringe science magazines, and he puts his “research” to use here. Richard “Death Merchant” Camellion’s latest mission sees him heading into the depths of India, where he is to locate an ancient Buddhist monastery which supposedly sits overtop a room filled with ultra high-tech devices and dead aliens -- ancient aliens, at that. And Rosenberger doesn’t shirk on his promise…even though it takes 150 pages, we do finally see those aliens, and the plot isn’t just written off with a Scooby-Doo type of a cop-out ending.

But in order to get there, first we must endure Rosenberger’s penchant for overly-detailed fight scenes. It’s frustrating because this is the first Death Merchant novel I’ve read that features endless fight scenes on the level of Mace. Parts of it even read like a Mace novel, with paragraphs and paragraphs of Camellion using obscure kung-fu moves to beat his enemies to death. But I say “frustrating” because the previous Death Merchant novels I’ve read have been more carefully constructed, less reliant on nonstop action and fighting.

Camellion hooks up with a team of Indian nationals in Calcutta, then flies with them out into the wildlands surrounding it. There they will make their way through treacherous country to the Buddhist temple. Camellion’s team is made up of Hindus, and Rosenberger is sure to remind us quite often that Indian Hindus just positively fucking despise Buddhists, and indeed part of Camellion’s team is made up of an Indian strike force which is looking forward to killing the (unarmed) monks so as to test out some new weaponry!

A KGB-backed commando squad is also on their way to the monastery; the reason Camellion’s been tasked with this mission is that both the CIA and the KGB found out about the place at the same time. We get the usual Rosenberger inessential bits from the Russian’s perspective…they know the infamous Death Merchant is with the other team, but like the pig farmer fools they are (in Rosenberger’s mind, at least) they discount Camellion, thinking he’s nothing more than a hunter who’s gone along for the trip!

This early in the series Rosenberger hasn’t worked out the later mainstays. There’s no mention of the Cosmic Lord of Death or auras or much other metaphysical stuff. However, earlier mainstays are gone – Camellion doesn’t put on a costume or impersonate anyone. In fact he spends the whole book in a Stetson hat, even getting pissed off when it’s later damaged in a firefight.

Also, there are no footnotes, which is a shame; instead, Rosenberger clunkily works his background detail into the dialog, so that it comes off as utter exposition. And what’s really bad is that he inserts these expositionary bits with no consideration of the scene at hand…literally, there are scenes where, immediately after a massive and gory shootout, Camellion and one of the Indians will converse about ancient astronomy! I mean, standing right there amid the bloody corpses!

Granted, some of this detail is interesting, and Rosenberger shows his Fate roots. Really though these blasts of exposition bring to mind the somewhat-similar Mind Masters series. And as mentioned the aliens and their technology do come in to play, though it seemingly takes forever to get to them. Hell, even when Camellion and team have finally infiltrated “the Room” beneath the monastery, with its weird and eternal blue light and selection of bizarre, alien machinery, Rosenberger spends more time on yet another action scene, where a traitor in the party attacks Camellion. Mind you, this is after a thirty or forty-page action sequence.

The aliens are dead, or at least in suspended animation, perfectly preserved in clear cases that can’t be opened. They’re the little gray ones of current popular myth, with the big black eyes and etc. Humorously enough, Camellion shows absolutely no interest in them, or amazement at the discovery. Instead he’s more concerned with getting a document out of there which apparently contains the sum knowledge of the aliens – a “book” of alien material which the monks have been working on translating over the past few centuries. Otherwise Camellion is unmoved, as if seeing the corpses of centuries-dead aliens is just par for the course.

Rosenberger unfortunately doesn’t delve into the other stuff supposedly there among the aliens, their high-tech devices which allowed them to manipulate energy and whatnot. But this I’ve found is typical of Rosenberger…lots of potential, little delivery. It blows my mind that the guy would be brave enough to come up with such crazy plots – I mean, imagine Mack Bolan coming across alien corpses – and yet not have the conviction to follow the crazy plots through. If you’ve introduced aliens into your tale, spend more time on them and less on endless action scenes. Action scenes which, per the Rosenberger norm, do little to excite the reader.

Hell In Hindu Land started off a loose trilogy, one which was continued in the next volume: #21: The Pole Star Secret. In this volume the head Buddhist monk informs Camellion that there are two other alien bases on the planet, the other being in the North Pole; Camellion ends the tale already planning a trip there. And I believe the trilogy concluded with #30: Shambhala Strike, though the final volume of the series, #70: The Greenland Mystery, was also about Camellion searching for a crashed UFO.
Posted by Joe Kenney at 6:30 AM

I haven't read this one, but I did read (and review) THE POLE STAR SECRET. And I was enraged that it makes a big deal about aliens, but when it comes time to reveal them (and the other secrets trapped behind a mysterious underground dome beneath the North Pole), Camellion says, "Ah, fuck it, we don't have time for this, let's split." WHAAAATTT!? Of course, if I had known he had already seen the aliens in this book, maybe I'da thought differently.

Marty, thanks for your comment. I enjoyed your Pole Star Secret review. I started to read that one first, but given that Rosenberger kept referring back to the events in this one, I thought I should get it and read it first!

Joe: Commenting years late, because I recently started thinking about the DM series for some reason. I have to dig them out of my closet, because for all their flaws I loved tham as an angst-ridden teenager. For my mind, the endless gun battles weren't a bug but a feature, although obviously some books were way worse than others. And yeah, they haven't gotten better as I've reread them.

My point: I'm just amused by your referring to this book, #20, as "early in the series." Really?