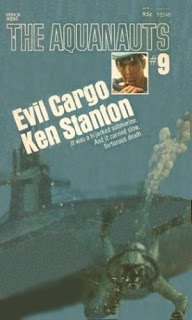 The Aquanauts #9: Evil Cargo, by Ken Stanton
No month stated, 1973  Manor Books
Manning Lee Stokes loved his in-jokery, and this ninth volume of The Aquanauts features his biggest in-joke yet, as Manning Lee Stokes himself guest-stars in Evil Cargo. Sort of. I knew something was up when the prologue featured a few quotes on the definition of “karma,” and one of the people quoted was Kermit Welles – a pseudonym Stokes used in the ‘50s and ‘60s. But as it turns out, Kermit Welles actually appears as a character in this Aquanauts yarn, and one can only wonder how much the character is based on Stokes himself.
The novel occurs between September 1972 and January 1973. There are a few allusions to previous volumes, but the biggest development here on the home front is that crusty Admiral Coffin, boss of the Secret Underwater Service, suffers a heart attack and is taken out of commision for the duration of Evil Cargo. This happens early in the book, as Coffin is briefing Tiger Shark and Captain Tom Greene on “Code Coke,” their new SUS assignment: someone’s stolen a Yankee-class Soviet sub, and it’s being used to run heroin and coke into the US. Coffin has a heart attack before he can finish the briefing – we’ve been told since the beginning of the series that he’s way past retirement age – and control of SUS falls on Greene’s shoulders. He will prove to be a pretty weak-ass boss, and luckily Coffin’s back in action by novel’s end. Given the lack of much continuity in the series, I wonder if Coffin’s heart trouble will even be mentioned in the next two volumes.
As usual though Coffin, Greene, and Tiger Shark himself almost come off like supporting characters. As I’ve said in just about every Aquanauts review I’ve written, this series has more in common with the standalone crime paperbacks Lyle Kenyon Engel “produced” in the ‘70s, with the “underwater commando” stuff almost an afterthought. This is especially prevalent in Evil Cargo, which doesn’t even bother with the Cold War intrigue at all; it’s really just a crime novel, with the main characters a pair of Mafia creeps who come up with the “drug run via sub” plan. Actually, Kermit Welles is the character who comes up with the idea, but more on that anon.
The entire novel is almost a prefigure of Stokes’s later Corporate Hooker, Inc., which was in fact one of those standalone BCI paperbacks. It’s got the same setup, with a scheme involving waterborne Mafia nefariousness and a twisted love triangle. Here it’s Dom Caprio, hulking and hirsute New York mob boss, who in a brief opening chapter meets meek Harvard student Harvey Fletcher in 1962. Dom hires Fletcher, we’ll learn, to be his accountant, but Fletcher ultimately doesn’t factor much into the novel; his subplot has him coping with the fact that he’s gay and going to a tough “leather” guy for kicks. After this opening we flash to 1972, and learn that Dom, now a successful mobster, is “banging” Harvey’s wife Anita for kicks – and it was interesting to see that “banging” was being used for sex in 1973.
This is certainly the sleaziest Aquanauts yet. Dom and Anita get right down to it in full-bore detail, in a crazed matter almost equaling The Nursery. There are some back door shenanigans, you see…that is, after Anita literally measures Dom’s 9 inches with a ruler, and then implores him, “Please, honey, fuck me in the ass!” Stokes was in his early sixties when he wrote this novel – as is Kermit Welles, we’ll learn – so it was great to see he’d only gotten more sordidly kinky with age. But then it’s all even more in-jokery, as we’ll learn that Dom himself is an “inveterate reader of paperbacks,” going through “three a day” at times; he especially likes ones with “plenty of gore and sex,” and judges their quality by how big of a hard-on they give him!
After this escapade Dom heads back to Manhattan but takes a wrong route and ends up in a “hick town” near Montrose, New York (or perhaps it is Monstrose – Stokes isn’t clear), and, stopping in a bar, meets once-famous author Kermit Welles. Manning Lee Stokes himself lived in Montrose, or near it (according to his Wikipedia page he died in Peekskill, New York, which is just a few miles from Montrose), so it’s clear that he based Kermit Welles somewhat on himself. Further evidence: Dom’s favorite Welles novel is the one where “the lady got her head sliced off by the Jap sword.” Yes, friends, this is The Lady Lost Her Head, the title referenced by Welles himself. In the real world, The Lady Lost Her Head was published under Stokes’s own name, so it’s curious he referenced this book in Evil Cargo and not one of his actual “Kermit Welles” novels.
But the Kermit Welles of the novel is more successful than the real-world Manning Lee Stokes; we learn that Welles’s The Lady Lost Her Head was made into a movie fifteen years ago, but Hollywood “butchered” it. That was then, though; now Welles is basically a lush, spending most of his time and money in a dingy bar here in this “hick town” in upstate New York. He makes his living off residuals or foreign reprints of his old books, and when Dom meets him Welles is in the process of begging the bartender to accept his check. It’s a down and out caricature of Stokes for sure, or at least I assume so, perhaps along the lines of the self-caricature William Shatner played in Free Enterprise. One must wonder if the description of Kermit Welles matches the description of Manning Lee Stokes:

Nothing against your review, but dig the new pic of you & the rugrat!