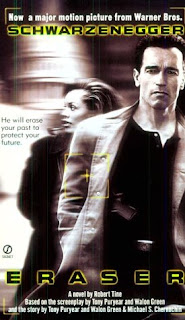 Fan theories can be fun. The most famous one is the theory that Nero Wolfe is Sherlock Holmes's son. This was expanded upon by SF writer Philip Jose Farmer who theorized that most of the heroes of Victorian and Pulp era fiction where related to each other.

Matrix tells her daughter about his childhood in Germany (supposedly the East). Krueger sounds like a German surname. Perhaps it was the real last name of Matrix (or vice versa). Another contribution to the supposed sequel.
There is a case of a sequel that was not a sequel but kept the main character: Avenging Force (Sam Firstenberg, 1986), where Matt Hunter reappears, Chuck Norris's character in Invasion U.S.A.

I can't be the only one who laughs at all those happy endings where someone's prevented from selling their new weapon to the "wrong people," meaning anyone but the Pentagon!