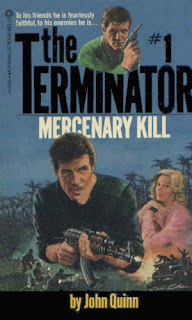 I've read a couple of these -- this one and one of the others -- and both were good. As they go they become really short books, almost novellas, with huge print. The action never goes off the rails, really, but the books make up for it by having Gavin be somehow more likeable than most action-series heroes. He can still take care of business, but he comes across as more of a guy who'd rather sit around and have a few beers and not have to go whack somebody. He's kind of laid back and much less of a psychopath than, say, The Lone Wolf.

Sorta reminds me of Matt Helm a bit, which isn't a bad thing. Although Helm's done a few things I think Gavin would balk at...

I'll echo Zwolf. It's a good series, and each book can be read on its own. The Kendall drama will bore you -- no resolution, never. She's perpetually pissed at him for one reason or another and he's all whatever, bitch, where's my mail? Gavin's background is always given, and he is always somehow, someway, drawn into trouble, and shoots his way out of it. My only complaint about the series is the way each book ended. We get a crap ton of build up, plot, characters, etc., and then a summary ending and burst of gunfire and off to the pub, job done. But it was better written than some of the Pinnacle efforts for sure (and better than many other publishers' action series, too), and they hold up well. I think you'll enjoy it a lot.