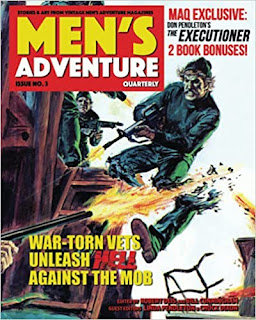 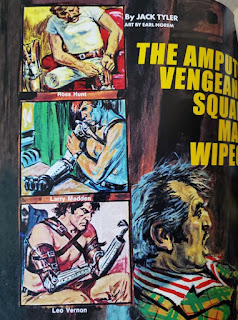 Tyler serves up succinct backgrounds for each of the three men, vividly capturing how they lost their limbs in the war and how they learned to live on without them when they returned home to East Michigan. But when one of their own, one who has served as an “idol” because he was determined to “live normally,” is killed by the mob, the three decide to get revenge. The action never falters, with lots of violent shootouts. Norem’s splashpage illustration also comes into play when a hapless stooge blows off the legless guy’s artificial limbs. Tyler writes the tale in flat, declarative sentences, so that it almost comes off more like a piece of reporting than fiction. He doesn’t get into the thoughts of his protagonists very much, and ultimately he doesn’t make much use of their prosthetics in some novel way, ie an artificial hand that hides a gun or etc. But the idea itself is super cool and Tyler does a great job of playing it straight and delivering a fast-moving and memorable piece of pulpy crime.
Tyler easily could’ve hussled this into a paperback series to go on the racks along with the other men’s adventure paperbacks in the ‘70s – Pinnacle, Leisure, Manor, even book packager Lyle Kenyon Engel might’ve seen the potential here for a hit. But then, by late ’75 the men’s adventure paperback genre was already dying down, with most series getting cancelled and not many new ones hitting the market at all. Per Michael Newton in his How To Write Action-Adventure Fiction, men’s adventure paperbacks disappeared around this time due to the oil crisis; publishers had to throttle back on their publications, and the low-circulation men’s adventure series were often the first to go. Whatever the reason, perhaps the world is a poorer place for never having had an “Amputee Vengeance Squad” series.
Next we get into the main portion of the book, which is devoted to two lengthy Executioner reprints; the first, originally published in the October 1969 issue of For Men Only, is a condensed version of #1: War Against The Mafia, and the second, originally published in the September 1971 issue of Men, is a condensed version of #2: Death Squad. As Bob and Linda Pendleton note, these “true booklength” versions might’ve been edited by Pendleton himself, or perhaps by Executioner series editor Andy Ettinger. Their appearance here is nice, but they’re mostly more of a novelty nature, as the actual books themselves are quite common, with about a zillion editions each. But it’s cool to see how they were molded into the template of a men’s adventure magazine, at least, and in this regard War Against The Mafia really stands out as different from the rest of the series with its focus on sex. Per my overly-comprehensive notes in my review of that first volume, these sex scenes were specifically added per Pinnacle’s request. How wonderful it must’ve been to live in an era where “add more graphic sex and violence” was an actual publisher request!
The Executioner theme continues with an insightful essay from Linda Pendleton, a piece on the mysterious The Executioner Mystery Magazine, and a focus on Gil Cohen’s art for the Pinnacle and Gold Eagle books. Bob Deis and Wyatt Doyle did an entire book devoted to this, One Man Army, and that one’s highly recommended. There’s also a study of Cohen’s art in William H. Young’s A Study Of Action-Adventure Fiction; there Young describes the cover of every Executioner and tie-in novel from the first volume all the way through the mid-1990s. The one thing I recall from this piece is Young’s note that Bolan on Cohen’s covers becomes increasingly weapons-bound as the novels progress; whereas the earliest volumes have him with a single gun and garbed in his blacksuit, by the latter volumes of the series he’s encumbered by grenades, ammo, and other accessories that dangle from his suit.
This issue’s “Gall-ery” is devoted to the famous Betty Page, and we get a teaser that MAQ #4 will feature work from a female men’s mag author. There aren’t any reader letters this time, but overall Men’s Adventure Quarterly #3 looks as great as the first two – this is clearly a labor of love from Bob Deis and Bill Cunningham – and it’s highly recommended for anyone into men’s adventure novels or magazines. Also, this issue inspired me to finally get around to posting an Executioner curio I acquired some time ago; it will be up on Monday.
Posted by Joe Kenney at 6:30 AM

Cool deal, I've been waiting for this one. I'm glad to hear it's not all just Executioner stuff, which I kind of worried it would be. I'm always happy to read about good ol' "That Bastard Bolan" but I mostly buy these things for the vintage story reprints, so it's good to know there are several of those, including some biker stuff, which I'm always up for. Hoping for a future volume (maybe triple sized) that'll be nothing but biker stories. I figure that'll be inevitable, considering how much those sweats focused on 'em.

In related news, if you want more Western stories like in issue one, I found a full-on reprint of three old Western pulps, pretty cheap. Just run ISBN 9798588166256 through the book-seller of your choice. Or poke around online and you can probably find 'em free, but since I'm anti-e-book to the bone, I go ahead and stick with print, even if it costs a few bucks.

Many thanks for that great, insightful review, Joe. Bill Cunningham and I really appreciate your support for what is, as you say, a labor of love. Here's a bit of trivia about the woke times we live in you may appreciate. I had a number of people tell me they did a search on Amazon for MEN'S ADVENTURE QUARTERLY but no issue showed up in the search results. I tried it and they were right. I asked the Amazon "Help" staff why. The answer was news to me. We tag the MAQ as being "For Adults" when we list issues. Under Amazon's current rules for a PC world, any book listed as being for adults will not normally show up in an Amazon search unless the person clicks on the Books section in the list of categories before doing the search. I didn't know that, and I expect a lot of other people didn't. We're still going to keep the MAQ tagged as an "Adult" publication, since it has occasional nudity in images and some sex scenes, as you noted. But it makes reviews like your and Amazon reviews from readers even more important to our ability to keep publishing the MAQ. So, thanks again for your review of MAQ #3 and for its mention of some of the books I co-edited with Wyatt Doyle! And, thanks also for the mention of the book "How to Write Action-Adventure Fiction." I think I need that one in my library. Finally, a general thanks for all of your insightful, amazingly well-researched reviews. Write on, Brother!

Just to echo Bob's comments, and say "thanks" for the thorough and insightful review of our work. I appreciate it.

Regarding the amputee veteran story and that initial period in the '70s when the soldiers were returning home from Viet Nam. There is a whole slew of movies, books, comics, and yes, toys that brought the battle-hardened hero template to audiences - either for good or bad. I think we could probably do a whole book on this iconic hero template that gave careers to guys like Chuck Norris and inspired so much vigilante fiction.

I'm sort of surprised we're not seeing a resurgence of the "veteran hero." At least not in our mainstream fiction media. Who knows when - or if - they'll catch up.

Robert, the censorship climate really is getting grim. We're going back to the 50s, but worse in some ways.

Dfordoom - I was born in 1950 and clearly see the difference between mid-20th Century censorship and censorship today. To an old fart like me, today’s brand of censorship seems worse, broader and often totally absurd.

Thanks for the comments, everyone! Sorry for the delay...my wife's birthday is on 9/29 and mine is on 10/6 (literally one of the few things we have in common is how close our birthdays are), so we usually take vacation this time of year and the blog's been running on its own. Bob and Bill, glad you enjoyed the review -- keep the MAQs coming!

Dfordoom, totally agree with you...in my opinion the difference between earlier censorship and censorship today is that back then there was common agreement on morality and normalcy, and this was mostly from a shared Christian foundation. I've been watching and reading these space race docs, and it's shocking to modern ears how often the scientists and astronauts will quote scripture, talk about God, or even pray -- stuff you wouldn't hear at all today. But with all that phased out in our modern era we no longer have a moral compass, and now censorship is based on ideology, and as you say it's mostly done via private corps and big tech. Take a look at the recent ad campaign for dating site OK Cupid, which wears its ideology on its sleeve. What once was considered wrong is not only right but championed. Pretty much the only perversion not normalized here is pedophilia, but give 'em another ten years of "progress." A campaign like that wouldn't fly decades ago...some of the photos in the campaign are the stuff that would get publishers arrested. And yet Bob and Bill's MAQ magazines are filtered out of Amazon search results!