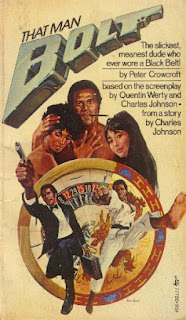 Good review. Does anyone know who the cover artist was?

Thanks for the comments, guys! Johny, I'll try to check out the movie soon, thanks for the link. Bob, I broke out my magnifier to try to figure out the tiny author signature at the bottom of the cover; I can't make out the first name, but the last name appears to be "Soliz."

Thanks, Joe. That's a new name to me.

I have the film on DVD, and the novel seems to be making an attempt to follow it, although the movie certainly doesn't have the novel's fascination with Mr. Bolt's pipeage.
Never read the book, but I definitely get the sense that the movie is better, particularly for dabs of Blaxploitation, and Fred Williamson.