The Hunter #1: The Ripper 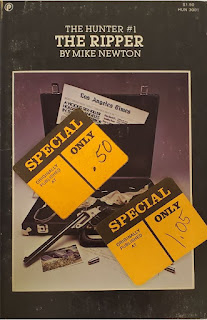 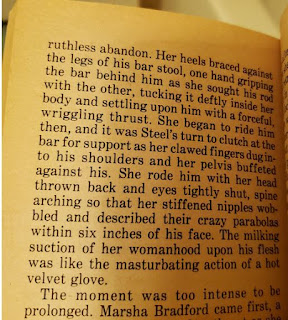 What makes it humorous is that here we are reminded again what a bastard Steel is. When the lady’s all done she asks when she can expect her son to be back on the streets, and Steel only chooses this moment to let her know the kid’s already back on the streets, let go due to a technicality. The lady is of course shocked at the revelation that she just gave herself to Steel for nothing, but our hero counsels her, “Try to think of it as occupational training.” After this we jump forward two months and once again see the Ripper back in action. This is one of the more lurid scenes in the novel, with the freak picking up yet another “whore” and getting her naked, then whipping out the switchblade and beginning to skin her alive. When Steel shows up on the scene it’s nothing more than a skinless lump of meat left behind.
The finale also takes a page from Dirty Harry and ratchets it up a couple notches. Steel doesn’t just chase down the killer and shoot him…he mauls him, ties him up to a merry-go-round, and guts him. Again there is no concern over realism; it would be clear to any and all that Steel killed the kid, but this is not a concern of the novel. At any rate Steel only featured in one more novel: The Satan Ring, which has the promising setup of Steel versus Satanism. I think I’ll have to check that one out sometime. Both it and The Ripper have been released as eBooks; I have the original paperback of The Ripper but not The Satan Ring, and given that it’s priced too high on the used books market I’ll probably just resort to the digital edition.
Newton got his start working with Don Pendleton, and there are several Pendletonisms throughout The Ripper, from random “yeah” affirmations in the narrative to describing bullets as “hollow-point minimag slugs.” But as mentioned The Ripper is sleazier than any Executioner novel, and I’d be curious if Newton ran this one by Pendleton for his constructive feedback!
Posted by Joe Kenney at 6:30 AM

Here’s an author that I don’t think you have reviewed- Adam Hall and his Quiller books. I picked up The Peking Target a month back and really enjoyed it. Quiller is a British agent employed by The Bureau (described as an offshoot of DI6). The book is written in a well-done first-person narrative. Quiller finds himself attacked in London, travels to Beijing to smoke out the threat and then ends up in South Korea for the wild conclusion. It’s got outstanding car chase episodes, lots of hand-to-hand combat and a long scene where Quiller is forced to relay false information to his handlers via a four language translation chain- Russian to Chinese to Korean to English. The suspense here is that Quiller understands Russian and he has just enough time to insert enough info into his message to warn his people. Lots of color about China and Korea. Hall also wrote The Flight of the Phoenix under the name Elleston Trevor.
I have my eyes open for more from this 19-book series.

Well it's a little bittersweet to see this review today. Mike Newton died two days ago. But I will admit it was nice to see as I've not heard of or seen this one previously.

Here is Newton's obituary, written by him, posted by his wife on his Facebook page.

(In Mike's own words)

C'est la vie, and adios y'all.

Michael was born in Bakersfield, California in September 1951. He cultivated dreams of a writing career from age seven, producing small "books" illustrated with photos and original drawings, given or sold for a pittance to classmates. On the practical side, he earned a B.A. in History and Political Science, with a teaching minor in English, pursuing sundry jobs in public education in California (1973-76) and later in Nevada (1979-86).

Nearly by accident, Michael advanced his writing dream in 1976, penning a fan letter to the author of his favorite action/adventure novels, the best-selling "Executioner" series. He had forgotten that whimsical letter two months later, when series author Don Pendleton phoned from his home in Indiana, inviting Michael to contribute a substantial chapter to his latest work, The Executioner's War Book. That entry became Michael's first professional publication and earned him an invitation—with colleague Stephen Mertz, author of many books under sundry pen names—to work with Pendleton in Indiana. There ensued a priceless eight-month apprenticeship, during which Michael also cultivated a love for the verdant hills of Brown County. After that partnership dissolved in August 1977, Michael published eleven books under his own and various pen names. In 1980 he received a startling letter from Harlequin Books, thanking him for his interest in their new Gold Eagle action/adventure imprint, poised to revive and vastly expand the briefly moribund Executioner series. Divining that Don Pendleton had placed his name "in the hat," Michael auditioned for the team and won a spot as one of four. By the time Don passed away in 1995, Michael had penned fifty series episodes. He went on to publish a total of 136.

Michael met his best friend and soul mate, Heather in 2000, and they married at Fort Augustus, Scotland, on the shore of Loch Ness, in 2003.

Diagnosed with an untreatable hereditary kidney disease in 1988, Michael lived normally until declining health forced him into home dialysis in 2013. From there, he gained a new appreciation of two favorite singers: Mick Jagger ("What a drag it is getting old") and Jim Morrison ("No one here gets out alive").

As of 2021 Michael had published 357 books, which included 258 novels and 99 nonfiction books. He also published 91 nonfiction articles, and 58 shorter pieces, including chapters in several best-selling true-crime anthologies. In 2017 Michael received the Lifetime Achievement Peacemaker Award from Western Fictioneers, honoring his publication of 62 western novels.

If any form of consciousness remains, he’ll miss Heather, their cats, writing and reading.
If lieu of flowers, Michael would love a PayPal donation to go to his favorite cat charity, Mara’s Heaven, an amazing nonprofit in Romania, run by Ada Constantinescu. (PayPal: ada_angel_77@yahoo.com) Check out her FB page and you'll see the amazing work she does.

Hi Brian, thanks a lot for the comment. I'm really sorry to hear that Michael Newton has passed on. Thanks for sharing that. I also noticed the coincidence of it happening on September 6, and his birthday being September 16. Joseph Rosenberger went on about that in one of his Death Merchant novels -- how people tend to die within a few days of their birthday. I can't recall which volume it was; maybe Alan Wood might know. I also appreciated the fact that action-adventure writer Newton ultimately wrote "357" books! I've got a lot of his books but just haven't gotten around to them; this Hunter #1 is one I got many years ago but just hadn't read. I'll certainly be checking out the second volume. Thanks again for the comment.

I don't recall Rosenberger's comment about dying around one's birthday. I might have made a note of it, as one of his opinions, but I generally jotted down only general plot details and JRR's wacky descriptions of things.