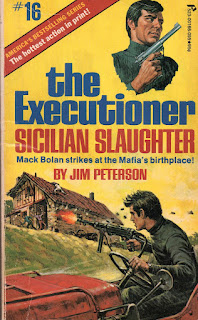 Mr. Molto! Man, I forgot about that guy. Joe, you know I'm not challenging your bonafides, but do we know he hasn't shown up in the 100s and 100s of Bolan novels since? Comic book writers are always finding obscure characters in decades-old stories and creating new adventures for them.

Don Pendleton’s 1973 lawsuit with Pinnacle was over the claim that Pinnacle owned the Executioner series, which, of course, they did not. During the lawsuit, Pinnacle hired William Crawford to write Don’s Sicilian Slaughter. During the lawsuit, Don Pendleton’s attorney filed an injunction to stop publication of the book #16, but the court allowed it to be published, and under the name “Jim Paterson.” Don believed the book 16 to be so badly written (as your excellent review indicates, Joe) that he never considered it part of his Executioner series. Although we own the copyright for the book 16, I honored Don’s feelings on that and did not license it to Open Road Media for ebook publication with the rest of the original series, books 1-15 and 17-38.

It is very possible that Pinnacle had further covers done as they thought they would win the lawsuit and “own” the books. Sicilian Slaughter and Firebase Seattle were Don’s titles, and I assume along with a paragraph synopsis for each, as that was his customary outline of future books.

Don had his agent Jack Scovil at Scott Meredith Agency let Gil Brewer try his hand at an Executioner as Brewer was going through a rough time. The manuscript was not at top quality and nothing written by Brewer was used in Dpn Pendleton’s future book, Firebase Seattle.

I have Don’s email interview he did for Young but it is not handy at the moment to check facts. It so happened Young testified for Harlequin in the HARLEQUIN ENTERPRISES LIMITED, Plaintiff, v. WARNER BOOKS, INC., Donald Pendleton, and Scott Meredith Literary Agency, Inc., Defendants.

The Gil Brewer manuscript. I wrote this in November 2015: “A couple of months ago I had a FB conversation with David Rachels regarding this. Since then I've done research with the University of Wyoming, American Heritage Center with the Gil Brewer Collection, concerning the two copies of a manuscript on a Don Pendleton Executioner novel, with the title, Firebase Seattle. As I had believed, the manuscript in the Gil Brewer collection is not Don Pendleton's Executioner Firebase Seattle Book 21. I received copies of several pages of each of those manuscripts (both same manuscript) from the University. One of the copies included a correspondence from Jack Scovil (who was Don's and also my agent) at the Scott Meredith Literary Agency, dated September 16, 1974, rejecting Gil Brewer's manuscript. The other included a note from Gil Brewer to agent, Jack Scovil, dated August 23, 1974 when he submitted a manuscript intended for Firebase Seattle. The University was unable to locate any actual correspondence between Don Pendleton and Gil Brewer, and I have no record of correspondence between them in Don's files, the majority of which are now in Lilly Library Manuscript Collection at Indiana University. In looking at the manuscript pages of the Brewer manuscript, it is obviously not written in Don's Executioner style, nor is the story line at all that of Don's published novel. As I have previously suggested, Don was always generous in giving other writers "an opportunity," and that is possibly what this had all been about as I understand Brewer had some difficult times.”

By the way, Don and I knew who had written book 16 for many years, at least by name. I don’t believe we knew anything else about him. Still don’t.

Joe Kenney, thanks for an in-depth review of the unpopular book.

Thanks for that additional info, Linda!

I've had this book since the mid-80's and never read it (thinking I needed to read them in order... which I haven't), but now I kinda want to read it just for the nihilism.

It's weird to make Bolan a sadistic maniac. He's always been kind of a "boy scout" as action-heroes go. Yeah, he'll kill a zillion people, but he always tries to protect the innocent from his rampages. Even The Punisher is more ruthless-acting, and The Punisher once assaulted a Mafia-ridden whorehouse by sneaking in, drugging a big pot of chili to put everyone in the place to sleep, and then went around cutting the throats of the sleeping Mafia goons so he wouldn't accidentally kill any whores in the crossfire! :)

William Crawford's definitely a crude writer, but I'm surprised he'd dare compromise Don Pendleton's creation so much. Pendleton's one of those guys you just wanna respect, even if his style is really quirky (with all those "yeah!" bits and the "what a man!" things). It'd be like re-vamping a Louis L'Amour character and having him slap around a woman... it just seems like something ya wouldn't do, out of sheer respect. But Crawford seems to be a real piece of work...

Interesting insight. Thanks for sharing Linda.

Solving mysteries. I was looking through The Executioner’s War Book and saw that Don had mentioned in a response to a fan, Tom B. of New York, on December 5, 1972, “Bolan himself is not resting, though, Book # 15, Panic in Philly, is due out of my typewriter December 15th, and will probably go on sale early next year. #16 will be set in Sicily—probably will be titled Sicilian Safari or Sicilian Slaughter—and will find our guy chasing the gradigghia across the old country. Best wishes to you, Tom—and, again, thanks. Don Pendleton.”
This is an excellent response directly from Don Pendleton in 1972, prior to the Pinnacle lawsuit and the court okay on the publication of book #16, written by William Crawford (Jim Peterson) regarding the fact that Don already had a title and destination for his planned book. So, there is no argument about that. And as I said previously, Don probably had given to his editor, Ettinger, a paragraph synopsis of story idea.
~Linda Pendleton

Thanks for the additional background info, Linda!

Thanks for the comments, everyone! And thanks, Linda, for the insight! This actually makes things more confusing. If Brewer submitted his "Firebase Seattle" manuscript in August of 1974, then it was certainly too late for it to have been the intended followup to #16: Sicilian Slaughter. So then I think you are correct, maybe it was Don Pendleton giving Brewer an opportunity, as he was later to do with Stephen Mertz and Michael Newton.

Also, I've only read in William Young's book that Pinnacle did a mockup cover of "Firebase Seattle" by Jim Peterson; I've never read this anywhere else, nor have I been able to find this cover. I even did some research by contacting various people a few years ago. Perhaps Young just got wrong info somewhere. Maybe Pinnacle just planned to make "Firebase Seattle" the next Peterson installment, as you say, taking the title and inspiration from a synopsis Pendleton gave them, but they never got to the cover or manuscript stage.

So then, if Brewer wrote his "Firebase Seattle" in August '74, it would likely not be a sequel to this William Crawford book, meaning that Mr. Molto never appeared again anywhere, unpublished manuscript or not -- and Marty, so far as I know, Molto's never been mentioned again. I haven't read Pendleton's "Firebase Seattle" yet, but I recall William Young writing that it had a similar character to Mr. Molto in it -- a former soldier who now worked for the Mafia -- and Young speculated that the character, despite not being named Mr. Molto, was Pendleton's attempt at trying to pay off on the setup promised at the end of "Sicilian Slaughter."

Thanks again for the comments, everyone!

Joe, of course the Brewer try-out for “Firebase Seattle” manuscript was not the intended follow-up to what would have been Don’s Sicilian Slaughter. Jersey Guns was. Don planned his books several ahead, with proposed titles and a very short synopsis. The book manuscript that Brewer turned in to Jack Scovil on try-out was book #21, which means that books 17, 18, 19, 20, 21, were written by Don and published before. By the time The Executioner’s War Book was published in May 1977, there had been 28 books published. Don was a generous “teacher” and inspiration and I’m sure if his agent mentioned that Brewer was going through one of his difficult periods, Jack would have said to Don that Brewer could use some work and Don said have him give it a try, and yes, like when he took on Michael Newton and Stephen Mertz out of generosity even though he might not use their contributions. Don had, and later you can include me, a good open business relationship with agent Jack Scovil for years.

Brewer had nothing to do with Pinnacle and the lawsuit or Crawford. And Don wrote things the way he wanted, not the way Young suggested.

So I see no confusion here at all as Brewer and the proposed manuscript had nothing to do with #16.

Regarding covers, I’m sure with Don’s titles and short synopsis that Gil Cohen may also have worked “ahead” with cover suggestions for the art department on upcoming books.
I do not know where Young got his information on a proposed cover, and I don’t have the Young-Pendleton Interview handy. I would also say, after our meeting Young at the time he was in the Pinnacle lawsuit, set to testify for Harlequin, I would take what he said with a “grain of salt.”

As I have said before, I’m sure that Pinnacle believed that they would win in court and take Don’s copyrights from him. Thank goodness justice won out.
-Linda Pendleton

Hi, thanks for the additional note! Just to clarify, the confusion I mentioned above was my own -- I was referring to my comments in the review; I was under the impression that Brewer had been hired by Pinnacle to be the next Jim Peterson, and that his "Firebase Seattle" was a sequel to Crawford's novel. This was just an assumption on my part, based off what I'd read in Young's book, that Brewer had written a unpublished Executioner novel, and that it was titled "Firebase Seattle." Your comment however made it clear that Brewer's novel had nothing to do with any proposed "Peterson" novels. Thanks again, I really appreciate it!

I mention this subject ad nauseam on this site, but that scene with the stewardess sounds like it's right out of an early Destroyer book, except that it isn't brutal ENOUGH for one of those.
Instead of being a tragic character she'd be a stereotyped feminist (the hot kind) who'd become a nymphomaniac over Remo. Then after (or during) the sex, she'd try to kill him, and THEN he'd get her through the air lock.
So, yes, that scene sounds like it was plopped into the wrong series.