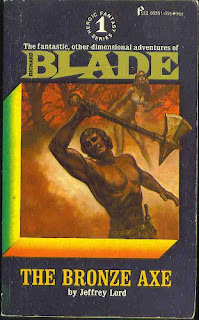 I’ve read about the Richard Blade series for a while, but never bothered looking into it. It’s pretty goofy, a long-running melding of the men's adventure genre with “heroic fantasy,” all about a James Bond-type who, each volume, is sent via a high-tech computer into “Dimension X,” where he tests himself in some quasi-Medieval, fantastical world, scoring with tons of scantily-clad babes along the way.

In other words, it’s full-on wish-fulfillment, about a modern dude flung into the primordial chaos of some Frank Frazetta-inspired paradise where good and evil are clearly delineated. And for all of that, it’s not that bad, most likely because this volume (as well as the next seven) were written by Manning Lee Stokes, whose contributions to the John Eagle Expeditor series I’ve greatly enjoyed.

This June, 1973 Pinnacle edition touts itself as a “first printing,” but the book is copyright 1969. After some research I discovered that MacFadden books published the series from 1969 on through to 1972, when the publisher collapsed. Pinnacle then brought back the series in 1973, reprinting the six MacFadden originals as well as two more, both of them written by Stokes. With the ninth volume on until the series finale, 30-some volumes later, Roland Green served as "Jeffrey Lord.” The series itself though is yet another creation of paperback-producing genius Lyle Kenyon Engel, who also gave us such series as Nick Carter: Killmaster, John Eagle Expeditor, The Baroness, and even Attar the Merman, among others.

All of Engel’s creations were prescient in that he capitalized on what was currently hot in the paperback fiction market, but the concept behind Richard Blade is almost sublime: What if we combined James Bond with Conan? For this is precisely the gist of Richard Blade. Our hero is a studly British secret agent, and with each installment he casts aside the trappings of modern civilization and goes about half-nude in a Robert E. Howard-esque world, cleaving skulls and spilling guts. Blade though is a complete cipher, at least in this initial volume; he has none of the memorable spark or quirks of Bond himself, and indeed Stokes works a subtle element into the narrative that Blade in fact somewhat forgets his earthly existence while in Dimension X. (Dimension X by the way appears to be an entire universe of Earth-like planets, most of them of the quasi-Medieval caliber, but others apparently more “futuristic”).

But then, Stokes’s gambit this first volume is to get right into it, leaving many questions unanswered (and for the most part unasked). Seriously, we meet Blade like four pages before he's hooked into a computer and sent into the world of Alb, where he instantly meets the Princess Taleen, who gives him a sword and demands his assistance. One could almost suspect the entire novel is nothing but the delusions of Richard Blade, still strapped into a computer back in London. The computer, we briefly learn, is a contraption of Lord Leighton, a scientific genius who has retained the services of Blade through Blade's superior, “J.” Leighton's intentions behind hooking Blade up into his weird computer are unexplained, Blade just going along with it with his eyes closed and thinking of England, I guess.

Again though, the process behind getting Blade onto Alb is skirted over so Stokes can take us immediately into his Conan pastiche of nubile wenches, roving bandits, cannibal priestesses, evil queens, and epic battles. One difference between The Bronze Axe and Howard's Conan stories is the amount of sex. Howard was writing in the puritan 1930s, Stokes in the decadent late ‘60s/early ‘70s, and so was free to play up on the lurid quotient expected of ‘70s series fiction. Blade gets involved in a bunch of sexual shenanigans in this first volume, though Stokes does tend to be overly-literary, even in the dirty parts. (I can think of no other novel where I have encountered the word “fellatrix.”)

This first novel gets a bit bland as it goes on. It actually opens well, thrusting Blade into a weird world where he witnesses a gaggle of witches kill a bound captive girl, then eat her. After this bizarre, unsettling opening, The Bronze Axe becomes a bit boring and padded. The novel comes in at 218 pages of tiny print, and I’ve found this is common of the books produced by Lyle Kenyon Engel; all of them are too long for their own good, and so suffer from inordinate padding. This first Richard Blade installment is no different, with many repetitive scenes of Blade going from one captor to the next, proving himself in mortal combat and then turning the tables on his oppressors.

The main plot has to do with the girl Blade rescues upon his entrance into this dimension; the sulky Princess Taleen, daughter of King Voth. Taleen was kidnapped by the minions of evil Queen Beatta, and so Blade protects her, escorting her to a local town, which is eventually overrun by Beatta’s men. Then Beatta’s place is overrun by the raiders of the pirate king Redbeard. It’s just all kind of endless and lacks any cohesion. Blade proves himself by fighting all sorts of challengers, from bears to viking-style sea raiders.

What’s odd is that Blade’s earthly life is eclipsed so that The Bronze Axe comes off as just another fantasy novel. Pretty soon Blade himself is cursing in the names of the various gods of this land (“By Thunor!” and the like), and Stokes intimates that he has completely forgotten being a British secret agent. But this “past life” forgetfullness convenietly comes and goes; two pages after “forgetting” who he once was, Blade will suddenly remember that he was a member of the “Medieval Club” back in London and so has hours of practice handling maces and broadswords and the like (now that's really convenient!).

The novel has more of the feeling of a picaresque, with Blade going from kingdom to kingdom in his quest to reunite Taleen with her father. But this plot is just goofy because you keep wondering why the hell Blade is even in this dimension and what he’s supposed to do here. But then, the only reason is the one stated: he is supposed to reunite Taleen with her father. That’s it! I can only hope that future volumes better handle the switchover from Blade’s “modern” life in London to his trips into Dimension X, but I’m not holding my breath. I have a feeling each of them will follow basically this same pattern; another thing I’ve learned from Engel productions is that all of them are basically repeats of one another.

Stokes writes with his usual literate hand, dropping ten-dollar words by the dozen. Characters in his novels usually come off as rather stentorian, and writing in a quasi-Medieval world gives Stokes ample opportunity to have his characters bluster endlessly in awkward diction. “Think you not so?” And so forth. I think Stokes must've also gotten a kick out of how many times he could use the word “gainsay.” In fact the writing style is close to Robert E. Howard’s original, only a bit more fussy and without the spark. Or as wonderfully weird. Unlike a Howard original, the weird stuff in The Bronze Axe is minimal, all things considered, with the only highlight being when Blade is the hypnotized captive of the gorgeous queen of those cannibalistic witches. Her method of hypnotizing is pretty unique; long story short, she is the “fellatrix” mentioned above.

There’s also a puzzling (but funny) homoerotic tenor at play; several times, when challenging brigands who are raping and pillaging various peasant girls, Blade will promise the brigands that they won't find Blade himself so easy to rape. Even stranger is a scene where Blade drops his trousers and has his squire apply lotion to his saddle-chaffed ass. The squire, massaging Blade’s ass, takes the opportunity to compare his own rear to Blade’s...!

It’s hard to believe the series lasted for so long. I was a bit burned out by the end of just this first volume. But I’ve already bitten the bullet and picked up the first several volumes of the series, so at the very least I’ll be able to see if each book is basically just the same thing, or if Stokes (and eventually Roland Green) gradually opens things up a bit.

Bonus note: The cover painting comes courtesy of Anthony “Tony” Destefano -- aka the guy who gave us Mondo!
Posted by Joe Kenney at 6:30 AM

Seems to me he was trying to tap into the same market that gave us the Gor books.

Hard to believe that this series is still produced in France. It has reached no. 205 this year. Seems it is still the same basic concept, but I really would like to know how much it developed in the small parts.

I remember seeing these in used stores in the late 70s and early 80s. I didn't bother with them because I couldn't find the first one. By the time I did I was in college and working in the store and wasn't reading any fantasy at that time. I remember they were usually bought and sold by people who also had the Barry Sadler Casca series.

I've got a small pile of these. About two dozen from various periods in the series. i've read #1 and 2, and they are pretty fun. Lots of violence, lots of sex, pure wish fulfillment as you state. It's like you've taken a 16 year old boy's nightly dreams of heavy-metal and D&D-fueled fantasy awesomeness and turned each into a Men's Adventure novel.

Exactly what Jack said, the BLADE novels were my stuff of my nerdly teenage dreams. I can't remember half the books I read for college lit but I'll never forget Blade's adventure in the land of the reverse-gangbang amazons.

Never read any of these, but I just picked up five of them for fifty cents each.

Nice overview! I just started my own series of Blade reviews and this is the best of the ones I've seen elsewhere.

Andy Decker - that is crazy! Wow. I never would have guessed that in a million years.

I'm 2/3 of the way through this one, the second Blade novel I've read. Yeah, that was hilarious when Blade thinks, "Good thing I spent all those hours twirling broadswords and maces, just to stay in shape, back in England." I am not generally a fan of this type of fantasy novel (should I read the one Gor novel I own?), but I find the Blades to be amusing. Repetitive, sure, but they move fairly well. I read the other one exactly one year ago, and it makes sense to space them apart, because the Blades seem like the same novel written over and over.