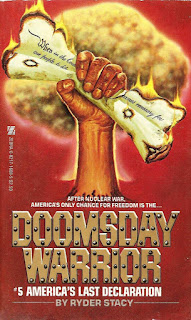 The Doomsday Warrior series continues to ecschew the episodic nature of other men's adventure series, once again picking up immediately after the events in the previous volume, with hardly any background information provided for those new to the story. Rockson and his pal Archer, as we'll recall, have just flown a commandeered jet all the way from Russia to the Great Lakes region of north America, bailing out as the jet spirals to the ground, out of fuel. America's Last Declaration opens the very next moment, as the duo splash into the icy waters below and immediately must test themselves against the mutated flora and fauna of "the world of 2089 AD" (that recurring phrase back once again).

Previous volumes of this series have generally started off "normal," with Rockson and his fellow freefighters engaged in some sort of adventure or skirmish against the Reds, before freefalling into a sort of psychedelic vibe in the final half of the novel. America's Last Declaration reverses that. It starts off weird, gets goofy, and then finishes off with an otherwise "normal" action sequence as Rockson must defend Century City against an invading army of Russian-backed Nazis. But then, this is why I put "normal" in quotes...I mean, the Nazis, despite being removed from the original issue by a century-plus, talk and act just like their damned WWII brethren, with jackboots and swastikas and the works.

It takes a while to build up to that action finale, though. First we roam the wilds of the north with Rockson and Archer, who encounter everything from sea monsters to metallic, magnetic balls that seems to be alive. Those who read #3: The Last American will remember that awesomely out-of-left-field sequence where Rockson was briefly captured by the Amazonian tribe of men-haters, who nonetheless wanted to keep Rockson around for a little lovin'. Ryder Stacy must have felt they didn't fully explore the potential of this scenario, as they basically reenact it over the first half of America's Last Declaration; Rockson and Archer are captured by the Kreega, a group of French Canadian Amazons (of course, every single one of them are beautiful) who capture wayward men, use them for their seed, and then kill them when they are no longer potent.

Rockson and Archer are in no hurry to escape. Stacy deliver one of their patented sex scenes between Rockson and the leader of the Kreega, and once she's had her fill she gives Rockson to the rest of the tribe. I forgot to mention that these Amazons are protected by panthers, who are only controlled via psychic means by a pair of Kreega virgins. The whole sequence is like something out of a fantasy novel. Once Rockson's finally gotten sick of serving as a stud, he acts upon his plan of escape -- which of course entails seducing those two virgins, who easily fall into Rockson's manly-man arms.

Believe it or not, the novel only proceeds to get goofier. After escaping the Kreega, Rockson and Archer trek on down into the midwest, where they come upon a bona fide '50s diner, still up and running, complete with a flickering sign and checkered floor and everything. Vintage cars ring the parking lot and a gum-smacking waitress takes their order, serving up burgers and fries and shakes. Throughout this series Ryder Stacy have tread the line between spoof and outright comedy, and here they stomp right over the line -- the joke, in fact, is on anyone who takes all of this seriously.

Using his psychic skills to win big at poker, Rockson takes off in an alcohol-fueled '83 Buick Roadmaster (!), tearing out of town just as the locals start shooting at him. Here Ryder Stacy display their lyric-writing talents, as Rockson flips on a tape and a late '80s rock hit streams from the speakers. (By the way, I checked Graphic Audio's adaptation of America's Last Declaration, curious to hear how they would present this song -- only to find they outright cut the entire segment. So then, now you know: the Graphic Audio productions of Doomsday Warrior are edited.) But even though they've escaped the townfolk, Rockson and Archer are still waylaid by a motorized caravan of cannibals, a full-on Road Warrior-esque battle ensuing.

During this time, Premier Vassily is plotting his vengeance back in Russia, still smarting over the embarrassment he suffered at Rockson's hands in the previous volume. Rather than call in his own troops, Vassily goes to Germany, where the country has once again taken up fascism, endorsed by the Reds. Despite that he fears this "Third Reich" force might eventually turn upon the Reds, Vassily still decides to send them over to the US, using them as stormtroopers to finally root out and destroy both Rockson and his homebase of Century City.

Back in Century City for the first time since the fourth volume, Rockson hooks up with yet another Amazonian -- his redheaded on-again, off-again galpal Rona, who is as ever nuts about Rockson and instantly throws herself at him. Yet another Stacy-patented sex scene ensues, Rockson once again casting aside thoughts of his "true love" Kim, who doesn't make an appearance this time out. But soon enough Century City learns of the invading Nazis, and Rockson, as head of the armed services, must concoct battle plans. The situation is grim, as the Century City freefighters are outnumbered a whopping fifty to one.

Stacy, still building on their epic theme, weave in several plotlines that have gone unmentioned in the past volumes; for one, Lang, the young mutant freefighter who reminds everyone of Rockson, is finally returning to Century City, which he left all the way back in the first volume, scouting out for the diminutive Technicians and their particle beam weaponry. Now Lang is on his way back, all of the Technicians in tow, with tons of particle beam cannons and whatnot. Also, the psychedelic Glowers, who back in the third volume promised to finally help America, are also converging upon Century City in their solar-powered ships.

So, after Rockson and the Century City forces have given their all against the Nazis in a long and well-done battle sequence, using commandeered Red gunships, employing commando tactics and boobytraps, the cavalry arrives in the nick of time, and the Glowers use their omnipotence to basically destroy all of the Nazis. It's a scene almost straight out of Ralph Bakshi's Wizards, as the Glowers invoke their psychic powers and make the Nazis see their worst fears. The bastards end up blasting each other apart, and once they've decimated the majority of the Nazis the Glowers depart, leaving Rockson et al to mop up.

Meanwhile Killov, who has really been AWOL these past volumes, sees the battle in progress from his KGB headquarters (which is like twenty friggin' miles from Century City, despite which Killov's never been able to find the place!), and orders a bombing run. But Stacy weave those threads and the Technicians, with their awesome particle beam weaponry, have arrived on the scene...

So, as expected, this volume is all over the place, but still enjoyable. And again it ends on a cliffhanger, with Rona seriously hurt and Rockson going to her, again employing his psychic skills to put a sort of protective bubble around her as death itself comes for her soul. Rona by the way is a much better character than the bland Kim, whom Rockson loves; we're reminded that he and Rona came to Century City together as teenagers, and have been inseperable since, but despite this -- and despite Rona's dedication to him -- Rockson still considers Kim his "true love."

America's Last Declaration ends though with a possible questioning of this, as Rockson tells Rona he does love her, so I'm curious if we will see the development of a love triangle or something. But then, given that Rockson has sex with about a hundred women in this novel, it's not like it really matters who is his "true love."
Posted by Joe Kenney at 6:30 AM

I just have to know, does French make it into the Kreegas' dialogue?

Brian, thanks for the comment. There's a smattering of French here and there in the Kreega dialog, but for the most part we're just told in the narrative that the women are "speaking French," which Rockson doesn't understand. He does eventually pick up the language enough to talk to them -- though all of the ensuing "French" dialog is relayed in English, of course.

It's even more amusing to find that there was stuff too silly even for the audiobook company to stomach.

Halojones-fan, thanks for the comment, as well as the others you've recently left on the blog. You make a great point, it is pretty amusing -- but still, I would've loved to have heard the Graphic Audio people attempt to record the actual song Ryder Stacy wrote!