Hitman #1: Who Killed You, Cindy Castle? 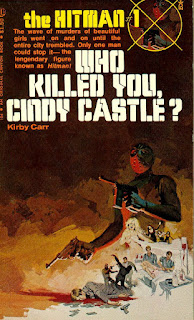 This was the start of an obscure 7-volume series* by Kirby Carr, who was actually noted young adult/etc author Kin Platt. Published by Canyon Books (before moving over to Major Books after Canyon's demise), the Hitman series (only this first volume has a "the" in the series title) clumsily melds the men's adventure genre with masked crimefighter pulp and hardboiled prose, all with a sort of parodic/tongue-in-cheek vibe. Be warned, though: some of the books in this series go for insane prices, and I'm not sure if it's because they're so rare or if it's because they were by Platt, who appears to be quite popular, although I've never read any of his other books.

Our hero is Mike Ross, a veteran of both Korea and 'Nam, who apparently is a lawyer by day. At night he becomes "Hitman," putting on a "black nylon commando suit" and a "cowl with slitted eyes" (not the hockey mask shown on that awesome grindhouse-esque cover painting). Carr generally refers to Ross as "Hitman" in the narrative while he's in costume, as if he has become a different character. He drives around the streets of LA in his "warwagon," a customized van, dishing out double-fisted death with a Mauser and a MAB PA-15 pistol. Ross just loves killing; this isn't inferred but outright stated in the narrative. This is why he went back for more in 'Nam, so crazy about killing the enemy that even his superior officers got worried. Now he wages a one-man war against the mob and crooks and basically anyone else who pisses him off. Did I mention he's also a ninja?

Like Batman -- and again like the '30s pulps that are part of the inspiration for this series -- Hitman is notorious in the underworld, and also looked upon with a sort of awe by the cops. What's really strange though is that everyone seems to know that Hitman is Mike Ross! Carr apparently can't figure this part out; we're told that Ross lives in a sprawling house high in the hills outside of LA, a veritable fortress that's not only hard to reach but only known to just a few. Yet the cops are on a first-name basis with Ross, knowing without question he's Hitman; in one intended comedic bit, a goon actually calls the cops to set up Hitman, and the cops are like, "Oh, that's Mike Ross." Obviously Carr is trying to spoof the whole "secret identity" nature of superheroes, but it just doesn't work because it comes off as too goofy.

Adding to the unsure tone is the horror element. Hitman's latest case involves a slew of blood-drained bodies, and after some research (ie, killing hoodlums) he starts to suspect vampires are at play. Really though there's a lot going on in Who Killed You, Cindy Castle? (each volume features a memorable title), so much so that the center never holds. In addition to the main case -- Hitman's search for Cindy Castle, whose roommate reported Cindy missing shortly before the roommate herself became a blood-drained corpse -- there's also a small army of mobsters with their own personal vendetta against Hitman, plus a transcendental meditation place filled with gorgeous gals, one of whom is a raven-haired beauty who keeps running into Ross while she's naked and high. (Yes, sex ensues.)

Ross is deadly and kills his enemies with no compunction, but Carr mostly plays up the laughs. I'm not saying the novel is a comedy, but there's a definite goofy tone to it, mostly thanks to the scenes from the perspectives of the gangsters. As expected they're all for the most part idiots, particularly Herbie, a hapless gunman Ross chooses to spare (after wasting the rest of Herbie's gang, boss included). There's a lot of stuff from Herbie's perspective, and Carr fills up the 190 pages of big print with lots of white space and dialog. The book is a very quick read. More comedy ensues via the character of Ross's "Oriental" martial arts teacher, a wizened and ancient dude whom Ross brought back with him from 'Nam and who runs a dojo in LA; in between bouts of non-PC pidgin English he beats the shit out of a few mobsters on his own.

Carr doesn't play up the graphic quotient, though Ross kills many people, shooting them or blowing them up or even slicing them with shurikens and other ninja weaponry. The sex scenes are a bit more graphic, and this has to be the only novel I know of that ends with the hero having sex with a gorgeous villainess and strangling her to death while he's having sex with her. Ah, the lurid joys of '70s pulp. Actually there is a nice lurid quotient at work throughout, but nothing as sleazy as the cover would imply (though strangely enough everything shown on the cover actually happens in the novel).

But again it's the minimal plot and lack of cohesion that brings the novel down. Ross basically drives around and bumps off the mobsters who are coming for him, while trying to figure out who's stealing blood from various LA clinics. This leads him to the appropriately-named yacht Dracula Doll, where Carr delivers another good action scene. The finale is the highlight, with Ross captured and chained in a dungeon, where the "high priestess" of a cult has her way with him. There's also the mother of the priestess, who claims to be a few hundred years old.

While it's all fun, it just lacks a certain something, as if Carr wasn't sure of his footing. Glancing through future volumes I see that things get a bit more sordid and graphic in time -- I opened up the sixth novel, Don't Bet On Living, Alice, right on a scene in which a hooker was pleasuring what I presume was the villain of the tale, all rendered in a super-sleazy extreme. Like the sort of stuff Manor Books would've published. (Given that this sixth volume was published by Major Books and not Canyon, maybe the publisher changeup resulted in a tone-change for the series; I'll have to wait and see.)

*Many sources state that the Kirby Carr novel The Impossible Spy, published by Major Books in 1975, is the eighth and final volume of the Hitman series. Having bought this book I can state that it is actually a standalone novel, unrelated to the series, about a Uri Geller-type psychic. This means then that the seventh volume, You're Hired, You're Dead, was actually the final installment of the Hitman.
Posted by Joe Kenney at 6:30 AM

I just read your review, and this book sound pretty interesting.

In spite of how strong that strangling scene you describe is, I can think of at least one that compares with it, in Destroyer # 2. Even though the villainess isn't killed (at least, not in the scene I mean), what's done to her by the Remo character is pretty strong.