The Penetrator #15: The Quebec Connection 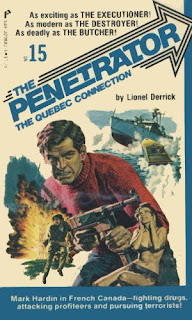 This volume of the Penetrator finds our hero Mark Hardin going all over the place, from Quebec to France, seeing a lot of action along the way. Author Mark Roberts appears to combine a few separate plotlines here, with The Quebec Connection starting off like just another tale of Hardin's tracking down and killing the members of a terrorist group, but then ends like something out of TNT, with Hardin fighting a trio of dwarves atop the Eiffel Tower. Even Hardin himself in this volumes wonders "what the hell he'd gotten himself into."

A group of hippie terrorists dubbed the 23 May Liberation Front is bombing places both in their homebase of Quebec and in the States; the novel opens with a pretty female member of the group planting a bomb in a Buffalo, New York bank. In addition to this the group is dealing a drug called Ziff, no relation to Artie Ziff, which appears to have the same effects as Ecstasy, just a decade or so before that drug existed. Only Ziff has a bizarre side effect which Hardin doesn't learn about until later.

As usual Hardin's method of research is pretty basic: he beats people around. In one out-of-left-field sequence, probably there just to boost the action quotient which is a bit lacking in the first quarter of the novel, Hardin poses as a priest and is jumped by a gang of street toughs, whom he kills after a protracted and brutal fight. Eventually he makes his way to Quebec (one of my favorite places in the world is Montreal, by the way), where he has tracked the movers and shakers in the 23 May Liberation Front.

Here the action picks up, with Hardin "penetrating" terrorist bases, killing guards and planting bombs. The hippie terrorists prove little threat, and indeed Roberts must've realized he already had Hardin kill a bunch of hippies back in #9: Dodge City Bombers, so he opens up the plot. While Hardin's tracking the French-Canadian terrorists, a separate group is tracking him: a Chinese villain who suffered fallout from Hardin's crime-busting way back in #3: Capitol Hell is finally getting around to his revenge, and so has sent out various teams of Chinese killers to waste Hardin.

There are some fun action scenes throughout, from Hardin taking on the first wave of Chinese assassins to another drawn-out sea warfare sequence with Hardin, in a commandeered yacht, launching a surprise attack on the hippie terrorists while they're engaged in a drug drop. After this battle the Feds appear, having been tracking the hippie terrorists themselves, and despite Hardin being a wanted man the Feds propose that he work with them on the case! Joanna Tabler, Hardin's occasional girlfriend, is with them; I'm pretty sure this is the first time she's appeared in a Roberts-penned installment of the series. (In fact, Roberts ends the novel with Hardin realizing that he'll have to break off relations with Joanna!)

After a laughable sequence in which we learn that Hardin has purchased a bullet-proof business suit, he flies to Marseilles, France, where a la The French Connection the Ziff has been imported from. Here those dwarves appear: the side effect of Ziff is that it corrupts the biology of the user so that his or her offspring will be born a dwarf. Masterminded by a trio of sadists who think dwarfism is normal and who hate the "giants," Ziff is created here in France and funnelled out to the 23 May Liberation hippies, who themselves are unaware of its damaging effects.

The Chinese have followed Hardin even here, and there follows a scene in which his bullet-proof suit is put to use, followed by an even better scene where Hardin gets his revenge. Meanwhile he closes in on the Ziff manufacturers, blowing up their plants and killing more terrorists. The finale is by far the best part, with those dwarves -- who, by the way, are dressed like the Three Musketeers at the time -- taking on Hardin atop the Eiffel Tower. (And yes, there's a part where Hardin grabs one of them and hurls the little bastard right off the Tower!)

While it was for the most part entertaining, I just felt that The Quebec Connection went on too long, and despite the abundance of plotlines it just seemed to drag at times. But then, I've found that I much prefer the sadistic, fast-moving installments written by Chet Cunningham.
Posted by Joe Kenney at 6:30 AM

It may go on too long, but from what I've gathered here for sheer silliness The Quebec Connection is even better than Philip Atlee's The Canadian Bomber Contract.

Two questions, if you can stand it:

How does Roberts handle French dialogue? Similar to Ryder Stacey - "speaking French" with the occasional word or two?

Does Roberts' Montreal ring authentic, or is it guide book stuff? I'm thinking here of Joseph Nazel's Canadian Kill (Iceman #6), in which we get wonderful descriptions like: "Below us the glorious city of Montreal, in the Quebec Province [sic] of Canada"; "the gleaming lights of Montreal, sprawled across an island where the Ottawa and the St. Lawrence Rivers met [sic] "; and "the plane had passed over the 763 foot high [sic] Mount Royal".

Oddly, Nazel dwells a good deal on geography, but neglects to mention that the city is predominantly French-speaking.

Brian, sorry for the delay in response.

Roberts handles French much better than Ryder Stacy did in Doomsday Warrior #5, which really isn't saying much. Still though, Roberts will dole out the occasional sentence in French...usually the opening comment from a French-Canadian terrorist in a scene which, after this first comment, will be rendered entirely in English. Periodically French terrorists will yell out one word in French before getting wasted. Hardin also makes clear that he speaks hardly any French, and Roberts occasionally mentions that Hardin consults a French phrasebook -- but again, all ensuing dialog is in English.

As for the material in Montreal, it doesn't have much of a ring of anything about it. Roberts skirts over topical detail, and just mentions a few streets and small cities outside of Montreal...very brief mentions. There's no talk of Notre Dame or anything, and Hardin's only in Montreal for a little bit before heading on to Quebec City, which itself isn't very described. Roberts spends more time on the chase through the river, and in fact the greater portion of the novel takes place in France, which is much more described than any of the French Canadian locales.

As for Nazel, I've only read one of his books so far (Iceman #1), and that was about enough for me...though a few months ago I did "luck out" and found Iceman #2 and #4 for cheap.