The Peacemaker #3: The Xander Pursuit 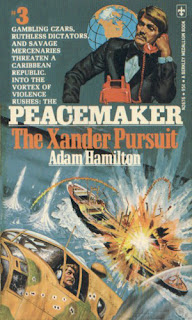 The correct title for the series should be "The Readers' Peacemaker."

Yeah, this series was pretty much a stillbirth, I think. A bad concept, executed badly.

As to if women can write men's adventure stuff, I can't think of many examples of them trying... although pick up an early biker novel called The Black Leather Barbarians by Pat Stadley and get back to me. That's one of the most hard-boiled things I've read in a while, and "Pat" is a "Patricia."

Thanks for IDing Mel Crair as the cover artist. He was one busy -- and great -- illustration artist!