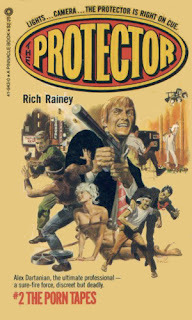 I've read the first book in the series, and, trust me, you aren't missing much. It's about as white-bread dull as it gets. All cardboard heroes gunning down cardboard bad guys... no characterization, no hyperbolic gore or sex, just pretty much by-the-numbers until they reach the page count and then, the end. Nothing terrible, but so average it's almost worse than a bad book. The bad ones at least give you something to laugh at. :)

I mention them almost ad nauseam on this site, but Revere's wife sounds like she's straight out of a Destroyer book, especially an early one. If she were in one of those (again, especially an early ' 70s one), she'd SET OUT to only excite the main character just as she has other men, but he'd excite HER incredibly, then after that bed scene he'd just put her out of the way. Judging by the descriptions, I'm guessing nothing even remotely like that happens in this book?

Well, at least it has a great cover painting. Thanks for IDing George Wilson as the artist.

I think there's 6 books in the series.

Thanks for the comments, everyone! Grant, what happens with Revere's wife is that she comes on strongly to Revere, who of course remains impassive throughout. They go to a hotel room, where she continues the act, then pulls out a dagger (before any a-doings have transpired). Revere then kills her, having "given her a chance" to see if she wouldn't try to kill him. So in other words it starts out like a similar scene from the '70s, then buzzkills any of the sordid shenanigans. Which pretty much sums up the entire novel!