Valley Of The Assassins 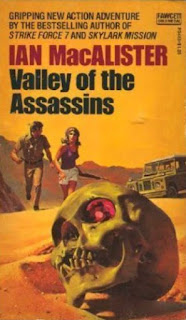 All four of Marvin Albert's novels under the Ian MacAlister pseudo are excellent.

Sounds like a good read, thanks for the review. You might want to think about making your reviews shorter and less detailed -- there's a little too much information for people who might actually read the books. Not trying to be critical of your excellent blog, just a friendly suggestion.

You might want to try some of his westerns, the ones that I've read have been pretty tough, more western adventure than western shoot-'em-up action.