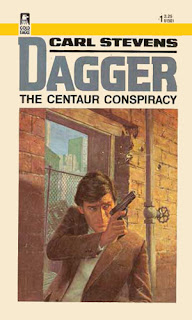 MacGyver also, I believe, (it's been years since I watched the show) did not like guns which is why he had to come up with various contraptions. That was the fun part of the show, but it actually makes more sense to carry a gun since in the real world you couldn't rely on having all the materials around you need or having time to make whatever you need. (Also I thin Richard Dean Anderson was really anti-gun.)

As pseudonym blurbs go, my favorites were always the cross-pollenation of Andrew Neiderman and V.C. Andrews blurbing each other's books, when Neiderman was actually secretly writing all the Andrews books at the time, since she was dead. :) I bet he laughed every time he did that.

Thanks for the comments, guys! FYI I've never actually even seen an episode of MacGyver. For some reason though I did watch Airwolf! Zwolf, all I know of VC Andrews is all the girls read those books in middle school. This was of course during the big horror paperback boom of the '80s.

Yeah, the VC Andrews saga is a very, very strange thing. :) In the past year I've been watching both MacGyver AND Airwolf, even though I never watched 'em back in the day. Got a good deal on some DVD sets. I've only watched a few of each, but they're both good. MacGyver's a bit silly 'cuz they're trying to do an action show with minimal violence, which always results in goofiness (which was why I could never stand the A-Team -- eight million M-16s going off and nobody ever gets killed), but it's not bad if you're in the right mood. And Airwolf is a lot better than I expected it to be. I thought it'd be major goofiness, and it has a bit of it, but it's got a little grit buried in there, too. :)

From what I remember Airwolf started off well, but went down hill in later seasons. It's been even longer since I've seen MacGyver.

I remember being in a bookstore and hearing an old lady be very suspicious of how V.C. Andrews continued writing after death. I told her the books were probably written by a ghostwriter or post death collaborations like Robert E. Howard had.

Non-existant authors: I remember reading a story how Anthony Boucher, editor (Fantasy & Science Fiction), writer and critic once wrote a novel under one name, reviewed the same book under two other names, and then ended up being quoted under one of those names as recommending his own novel.