The Spider #22: Dragon Lord Of The Underworld 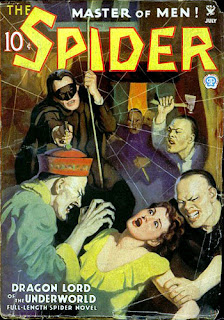 The Spider #22: Dragon Lord Of The Underworld, by Grant Stockbridge
July, 1935  Popular Publications

This volume of The Spider repeats the Yellow Peril vibe of the earlier (and superior) #15: The Red Death Rain; as expected, Richard “The Spider” Wentworth never once reflects on that previous caper, but then the entire series operates on a sort of reset mentality. I mean at one point Wentworth worries over the “teeming millions” who live in New York, but you’d figure after the previous twenty-one volumes of slaughter, massacre, and devastation the population would be down to just a few thousand survivors.

I enjoy the Yellow Peril storylines of vintage pulp, but this one’s a bit unspectacular, at least when compared to The Red Death Rain. Our villain is Ssu His Tze, the self-proclaimed Emperor of Vermin; he resides on a throne and wears a yellow robe and other traditional Chinese garb, lacking the more outrageous refinements of the average Spider foe. His gimmick is he controls the “vermin” of the world – snakes and spiders and such – and he’s come here to put together the underworld of America so that he can control it and use the goons to get the invading Japanese out of China. The novel opens with his plot already in motion; Wentworth, in Spider garb, interrogates a crook and his goons just as they return from a meeting with Tze. The crook is one of the few who turned Tze down, and sure enough a few Chinese hatchetmen show up to take him and his thugs out.

There’s a fair bit of “yellow” being used as an adjective for various Chinese thugs in this one, as well as the old standby “chink,” but I imagine anyone reading a 1935 pulp will be prepared for this and not too much put off by it. And hell for that matter, it’s still not as over the top as the average installment of Mace. Wentworth takes out the hatchetmen, who meanwhile kill off the American thugs they’ve come here for—this part features the memorable moment of a woman’s unconscious form being used as a decoy. Later (once she wakes up, that is) she’ll return to muddle up the plot and constantly try to kill the Spider: her name is Flo Delight, apparently a nightclub singer or somesuch, and she happens to be the woman of the crime boss the hatchetmen just killed, though she mistakenly believes the Spider killed him.

Norvell “Grant Stockbridge” Page keps the narrative ball rolling in what turns out to be an extended action scene; Wentworth and Ram Singh get in a car chase with an escaping hatcetman, and when Wentworth, now in normal clothing, goes immediately thereafter to Nita van Sloan’s fashionable apartment he finds that he’s been followed. In the ensuing melee Nita’s captured and taken off by car, and as Wentworth fires at her kidnappers Nita’s Great Dane Apollo jumps in the way, gets shot by Wentworth, and falls in the car with Nita! No worries, though; Nita’s later freed – Tze actually pissed off that his subordinates would even abduct her – and as for Apollo, we’re eventually informed Wentworth just hit the dog’s shoulder and he’s doing fine now!

As mentioned Tze regrets Nita’s abduction; this is relayed by the man himself in a nicely-rendered sequence in which Wentworth visits Tze’s underground domain, deep under Chinatown. It’s a veritable dungeon of traps, as Wentworth will discover later in the book, and a blindfolded Wentworth is led through the labyrinth by a woman. Page again skirts the limits of ‘30s pulp by ensuring that we readers know this woman is hot and built without outright saying so, employing phrases like “high breasts” and all that good stuff; we’ll learn her name is San-guh Lian-guh, and she offers herself to Wentworth in another effectively-rendered sequence. Of course, he turns her down due to his steadfast uprightness (one of the many reasons I never would’ve made it as a pulp hero). After this she sort of disappears from the narrative, showing up once or twice to vow that the Spider will die – and of course true to the pulp template her fate is not delivered by Wentworth.

As for our main villain, Wentworth is escorted into his inner sanctum, where Tze sits on a throne, resplendent in his gold robe. Honestly I thought he was a boring Spider villain. He considers himself an emperor and claims to only be here long enough to assemble the underworld to defeat Japan, after which he’ll return to China; he asks Wentworth to help him. And yes, of course Tze knows that Richard Wentworth is the Spider; practically everyone knows this except for the authorities. I mean this dude who just entered the country even knows it. Anyway, Wentworth of course knows Tze is lying and immediately refuses to help him, swearing to take him down. Page nicely plays up the “Oriental respect” motif with Wentworth confident he’ll be able to leave his mortal enemy’s domain without any fear of a threat on his life, and could return here at any time to talk to the man in peace.

Tze’s attacks follow the outline of previous installments – he hits banks and other business establishments, employing his endless army of hatchetmen, with the novel addition of poisonous spiders and snakes. Given the “vermin” tag I was expecting something more along the lines of rats and stuff, but Page does a fine job capturing a creepy crawly vibe. Sometimes though it’s a bit humorous, like when one of those hatchetmen lets loose some poisonous black widow spiders in Nita’s apartment, and Wentworth jumps up on a chair and starts shooting them one by one with his .45.

Page also gets pretty ghoulish later on, approaching almost a body horror vibe – in the most memorable sequence in the novel, Wentworth tries to escape Tze’s underworld of traps while the cops, oblivious as ever, chase after him. The poor police set off a variety of traps, including these gross-out “acid flakes” which turn out to be weaponized fungus. In an unsettling bit Wentworth watches as one cop suffers from the fungus, bulges eruping all over his body – and with his usual encyclopedic knowledge Wentworth instantly knows what has assailed the cop, and that innumerble “winged fungi” are now harvesting in the man’s body, soon to erupt from it. Pardon me while I barf!

The other Spider novels I’ve read usually feature a late plot detour, in which the action abruptly moves to some other locale or Wentworth is chasing after some other red herring. Early in the novel Page seems to be going in this direction – we learn that Tze caused some havoc in Florida a few weeks back – but suprisingly Wentworth never follows up on this. Instead the big third act moment is one of Wentworth’s inner circle paying the ultimate price for helping the Spider. SPOILER ALERT: It turns out to be kindly old Professor Brownlee, who we’re informed has been in Wentworth’s debt for the past fifteen years, given that Wentworth, in college at the time, helped Brownlee out of a bad situation. Sadly though, Brownlee is gunned down by Tze’s men as he’s talking to Wentworth on the phone. When Wentworth gets to Brownlee’s upstate home, he finds that his old friend has been shot in the back and in the back of the head. In a previous volume Wentworth’s chaffeur Jackson was killed…then miraculously returned to life a few volumes later…but I don’t think Brownlee is accorded the same miracle. I think this was it for him.

A Spider mainstay who doesn’t show up till near the end is Commissioner Kirkpatrick, who in fact is now Governor Kirkpatrick, with some new guy named Patrick Flynn serving as the commissioner. Kirkpatrick’s appearance is memorable: Tze has captured him and hooked him up to an EKG machine; this is interesting for armchair historians as Wentworth knows this is a “cardiograph machine” which has recently been invented by “heart specialists.” But in a sort of prefigure of Speed (only not as annoyingly dumb), the rate of Kirkpatrick’s heartbeat determines whether New Yorkers die or not. Thus he is almost in a zombie state, having had to control his emotions and his heartbeat for a day or so.

The finale plays out on this theme, with Wentworth marshalling his will against the assembled yellow perils of Tze, San-guh, and the other hatchetmen, with Flo Delight among them (she keeps showing up to annoy Wentworth and the reader, stubbornly determined to get revenge on the Spider for something he didn’t even do). Like a ‘30s Jedi Wentworth uses the force of his will to guide Kirkpatrick. But this is another Spider yarn where someone else does Wentworth the favor of killing off all the villains, which kind of annoyed me. But then overall Dragon Lord Of The Underworld was only passable so far as The Spider goes, not rising to the level of previous volumes, and while it wasn’t bad by any means I didn’t enjoy it as much as some others.
Posted by Joe Kenney at 6:30 AM