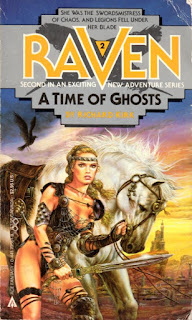 The Raven saga continues with a second volume that seems to be set shortly after the first; Raven and her guru warlock (plus occasional bedmate) Spellbinder are still in the same region in which the previous volume concluded, however now Raven is training some new character named Silver on how to be a warrior in the army Raven’s apparently decided to form. Oh and meanwhile the novel has opened with that same future prologue with some unnamed old guy traveling around a desolate world and telling tales of long ago – tales about Raven. Last time I opined this guy was Spellbinder but I could be wrong.

Anyway in the narrative itself – the prologue and epilogue are the only parts set in this post-disaster future – Raven’s taken on a Conan-type barbarian from the north named Silver, who when we meet him is being trained by the ghost of Argor, the warrior who trained Raven herself a year ago. It’s not really Argor’s ghost, though, but just his spirit or somesuch, magically teleported here by Spellbinder as Argor doesn’t want to venture out of his city. Silver has long black hair and a Conan build, with the novel addition that he’s a mutant who can turn his body into silver, hence his name. Backstory has it that he scaled some magical tower in his homeland, the result of which gave him this supernatural ability. We’ll roll with it.

Now you might think a barbarian warrior with mutant powers is cool enough to warrant his own series, but “Richard Kirk” (aka British authors Richard Holdstock and Angus Wells) doesn’t have much time for Silver: more focus is placed upon two other new characters who become part of Raven’s growing army. Like some primordial Spartacus Raven’s intent is to free slaves, train the notable ones as warriors, and use them as her personal army of chaos. Or something. I’ll admit it’s been a while since I read the first volume, so it’s possible I’ve forgotten some of the finer details of the saga. At any rate Raven and Silver crush a slave caravan, hacking and slashing the slavers, and two of the freed slaves get Raven’s interest: one’s a hotstuff brunette, also from the northern tribal lands, named Karmana, the other’s a tall and lanky guy with pale, haunting eyes named Moonshadow.

Of the two, Karmana is the one to gain the most spotlight, at least initially. Karmana is a proud warrior woman who was captured and enslaved, but worse yet was raped – the memory of wich haunts her. I have to say, speaking from the perspective of our #metoo world, the subject of rape is treated rather delicately here, at least so far as ‘70s fantasy goes (the series didn’t make it to America until about a decade after its British publication…things just moved more slowly then, folks). Whereas other series of the day like Gor had tons of rape-fantasy throughout (I should admit I’ve never actually read a Gor novel), the female characters in Raven struggle with how to cope with the fact that they’ve been raped. Of course, this being a fantasy adventure series and all – plus the women in question being kick-ass warrior babes – the coping method involves gutting, emasculating, and just in general killing their rapists.

All three of these things Raven did to her own rapist, Karl ir Donwayne, at the conclusion of the first volume; thus imagine Raven’s shock when she learns that the man who raped Karmana was…Karl ir Donwayne. Now, my immediate reaction was that maybe Donwayne did this particular raping you know, before he was emasculated and gutted by Raven, but Raven’s immediate reaction is that Donwayne is still alive. This just proves once again that the “Swordmistress of Chaos” knows more than I do, because Raven turns out to be correct, at least sort of – at length she decides to consult one of the apparently-many oracles of her world to find out what the hell is going on. Eventually she and Karmana set off for the Sons of Ulthann, a remote area which is the remnants of a once-great civilization.

There’s a fair bit of world-building here, more than last time, with lots of stuff about the new lands Raven visits, their history, and their people. After many pages have elapsed Raven and Karmana hook up with Moonshadow, who upon being freed by Raven has set off on his own quest – one which coincidentally also involves speaking to the oracle of Ulthann. With his long hair, slim build – so unlike any warrior Raven has ever met – and moon eyes, Moonshadow brings to mind David Carradine, and given the ’78 publication date it’s possible our authors were inspired by Kung Fu. Whereas Silver and his mutant abilities sounds ripe for the exploiting, the authors set their sights on Moonshadow, and he too has a story that could warrant its own series: he appears to be from some other world and is on a lifelong hunt for a force of evil known as the Crugoan. His power is also fueled by the moon: when it’s full he is at the height of his strength, but when it fades away in the sky his energy ebbs to almost nothing and his skin becomes transluscent.

Eventually the trio wind up in the courtroom of Karagan, high prince of Ulthann (the authors still have the unfortunate tendency of giving their characters similar names, I mean “Karagan” and “Karmana” in the same book)…and eventually Raven winds up in the bed of Karagan. Surprisingly, this being Raven’s first bed action in the novel (and we’re almost halfway through), the scene isn’t overly explicit (“When he entered her” and the like). Even more surprisingly, when Karmana shows up and pushes Raven aside for her time with the hunky high prince, the authors not only skip the opportunity to depict a friendly three-way but also leave the ensuing boinkery off-page.

Raven talks to the ghostly voice of the oracle, which tells her that Donwayne is sort of alive, his spirit or somesuch saved by that dastardly necromancer Belthis after the gory denoument of the previous volume. Sadly friends this means that A Time Of Ghosts is a retread of the first volume, given that the two main villains of that one return for this one…even though one of them was soundly killed by Raven in the previous book. The oracle opines where Donwayne might be, and of course this becomes Raven’s new destination; conveniently it’s pretty much where Spellbinder wants her to be, given the main plot thread of the novel – that Gondar Lifebane, the viking ruffian of the previous book, has abducted the fair Kyra, co-ruler of the empire of Altan (and yet another of Raven’s bedmates in the previous volume…as was Gondar himself).

We’re getting pretty well into the book now and there haven’t been any major action setpieces for our heroine. This occurs finally; while aboard a ship taking her to the waiting Spellbinder, Raven and Karmana are attacked by the crew, all of whom want a piece of these two hotstuff, busty, scantily-clad babes they’ve taken on as passengers. So the two warrior chicks start hacking and slashing their would-be rapists, with Moonshadow assisting, proving finally he’s the warrior Raven suspected, despite his frail build. This part features the unforgettable moment in which Moonshadow slips on a trail of gore and knocks himself out. It also features the memorable moment of a friggin’ sea monster coming out of the ocean and attacking all and sundry, only to be stopped by a giant bird Raven calls for help.

Now reconnected with Spellbinder, Silver, and a bunch of other characters the two have drafted in the interim – Raven’s “army” now up to a total of 12 warriors – Raven and her comrades scale the cliffs of Lifebane’s island fortress Kragg, Raven surprising the brawny viking while he’s in the bath. However Lifebane swears he has nothing to do with the kidnapping of Kyra, and that it’s all a setup. He gives Raven one of her ships and it’s off to meet the navy of the Altan to tell the crazed ruler that his sister is not on Kragg. The authors realize they’ve been short on action, thus provide a sequence in which Raven fights the Altan’s “Night Warrior,” a swordsmaster who happens to be invisible. Raven uses her wits and the help of Silver’s shining hands to see the unseen foe – Silver’s hands allowing Raven to see the outline of her opponent.

In a cool sequence Spellbinder sees back in time and their ship follows the ship which abduced Kyra, a few days before. They follow after it over a few days to see its destination, the spell exhausting Spellbinder. Eventually they learn the ship has gone far north, to the Ice Lands, but for some reason they don’t head straight there to kick ass and rescue Kyra. Like last time the plot just jumps everywhere; eventually Raven and army head back to the Altan’s home, which they’re surprised to learn has been overtaken by an “army of millions” comprised of various tribes. Raven stages some campaigns which end up freeing the city, after which she and her comrades finally head up north to free Kyra.

Here the novel gets down to what it’s supposed to have been about from the beginning: of course, necromancer Belthis and zombiefied Karl ir Donwayne were the true abductors of Kyra, and when we finally meet up with them the zombie Karl has just finished raping the poor girl yet again. Silver again comes to the rescue, turning his whole body silver and fighting a bunch of warriors made of ice. The climax has Raven again fighting Karl ir Donwayne, even though we already saw her defeat him last time, but the bastard escapes yet again, annoyingly enough. Belthis isn’t as lucky, as it turns out he is the current vassal of the Crugoan entity Moonshadow has been hunting across worlds. But it escapes, too, pulling itself out of Belthis’s body (the corpse of which is unceremoniously kicked off a cliff) and disappearing into the void, Moonshadow following behind. And meanwhile Raven’s army suffers a surprising loss, but curiously not much is made of it.

And with this A Time Of Ghosts finally comes to a close; at 198 pages of small print it was a longer read than I expected. This was mostly due to the slow-moving nature; whereas Swordsmistress Of Chaos was a bit juicer in the sex and gore departments, this one was downright sluggish, and often faded to black when the goings got good. In fact, Raven manages to hook up with Moonshadow as well, but it too happens pretty much off-page. I’m too lazy to research it but I wonder if this wasn’t so much a case of authors co-writing each volume, but taking turns on them. Meaning, a different writer churned out A Time Of Ghosts than the one who wrote Swordsmistress Of Chaos. Not that the writing seems totally different, it’s just the vibe that has changed, and more importantly while I enjoyed the first one I found this second one a chore to read.
Posted by Joe Kenney at 6:30 AM

From personal experience it's more common to find the book you've reviewed on the shelves of second hand book shops than any of the others. I think your review has hit on the reason why.

Never heard of this series. Thanks for keeping up the good work.