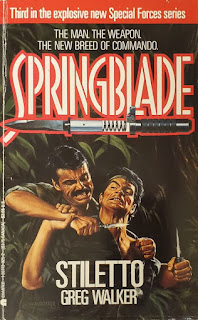 There’s no pickup from the previous book, and in fact much is made this time around about how main protagonist Bo Thornton is a “civilian” and no longer a military man. Meanwhile he’s already undertaken two covert military operations in the previous books. But then, Walker seems to have run out of steam, so far as his trio of protagonists goes, with the titular Springblade commando team playing second fiddle to a bunch of one-off Nicaraguan soldiers and terrorists. Bo himself doesn’t even appear until around thirty pages in, with the opening quarter devoted to a character named Angel Barahone, a Nicaraguan native who grew up in the US and currently serves in the Special Forces alongside series regular David Lee – the only member of the Springblade commando group who is still active in the military.

Angel, despite taking part in missions that wipe out the Sandanistan rebels, is actually a Commie at heart, and turns out to be a traitor in uniform; after an opening sequence in which he and David Lee take out some Sandanistas, Angel goes AWOL and delivers himself to the front door of a Sandanistan office in Managua, where he claims to be a believer in the cause. More importantly, he has intel which the Sandanistas can use to crush the Contras and the Americans. Later we’ll learn that Angel was not only trained by Bo Thornton, but is also “like a son” to him, not that Walker does much to exploit this relationship. Indeed, when Bo finds out Angel’s a traitor he has a few moments of disbelief, then basically vows to kill him.

We meet Bo as he’s practicing his knife-fighting technique with Jason Silver, the third member of Springblade, however this will be it for Silver this time around. The two get in a knockdown, dragout mock knife fight along the beach, complete with them rolling around in the sand and stuff – it isn’t the least homoerotic or anything – and after this Bo gets the call about Angel. This is also the only time series regular Calvin Bailey appears, ie the DEA agent who serves as Springblade’s handler. Bailey calls Bo with the bad news and Bo heads for Honduras, where he’s briefed on the situation by local army boss Major Gaston. Even here Walker manages to work in the series fixation on bladed weaponry, with Gaston showing off a butterfly knife he picked up in ‘Nam.

Gaston and Bo figure that the damaging intel Angel’s taken to the Sandanistas must have to do with the recently-built US base in Choluteca, right on the border of Nicaragua. Angel was part of the team that built this base, thus he would know the best means of destroying it. Here Walker injects a bit of commentary on the situation in Central America; Gaston claims that the situation is shit, with the US-backed Contras suddenly showing their sadistic impulses, butchering people right and left, yet the politicians would still rather back them than the Commie Sandanistas. Bo meanwhile is more pissed over the fact that a Green Beret has turned traitor; he’s never heard of such a thing happening before.

Bo’s plan is to go in with just one other guy to head off the squad Angel will be leading on his attack. He requests David Lee, mainly for the reason that Lee’s familiar with the area and also has stake in the game, given that he served alongside Angel. Armed with a Stoner machine gun, an M-16, various sidearms, knives, and explosives, the two are dropped into Nicaragua and begin the arduous trek through the jungle. I suspect Walker must’ve been familiar with such operations as he brings a lot of authenticity to the narrative, down to Bo and Lee arguing over which of their prepackaged ready-to-eat meals (aka MREs) are the worst. However there’s still been no action for our main characters thus far, unlike last volume where Walker would toss in random but insane action scenes – most notably when Bo and Bailey were attacked by transvestite bikers with intentions of sodomy. (Now that's the story Jussie Smollett should’ve gone with!!)

In a Manning Lee Stokes yarn, our heroes would bump into some native gals who would serve as their guides and soon get all nice and cozy on the jungle floor with them. But we’re in the ‘90s now, and all that pulp stuff is frowned upon; the focus is on “realism,” so there go the sexy jungle babes with their pidgin English and “full breasts.” In fact the only woman in the novel is Bo’s girlfriend, recurring from previous books; they have an off-page sex scene shorty after Bo’s introduction into the text, after which she disappears from the narrative…with Bo often wondering if he’s in love with the girl. Oh wait there’s also a buxom waitress David Lee hits on before the operation in Nicaragua, but we don’t get any more detail on that.

However as mentioned the feeling of realism is strong and Walker does a great job of putting us in that green hell alongside Bo and Lee. There’s some good foreshadowing – not to mention Walker again working in the grander theme of knives in relation to the series concept – when Bo and Lee are surprised by some helicopters which are circling the area, and in their quick escape Bo manages to lose the trusty combat knife he’s carried since Vietnam. He and Lee get in a long discussion about it, Lee concerned that Angel’s men will find the knife and Angel will realize Bo is here, but Bo disbelieving this will happen. However the veteran reader will know that, given the amount of dialog which has been devoted to the topic, this is indeed what will happen. And it is.

But there’s no big “you were like a son to me!” climax here. Bo and Lee set up traps in the jungle and wipe out several of Angel’s Sandanistas before they can reach the American base, and at one point in the melee Lee is shot, his rucksack abosrbing most of the damage, but losing most of his ammo in the process. This leads to an awesome sequence where Bo and Lee split up, the former to head off Angel’s mortar team before they can hit the base, the latter to act as a one-man army and wipe out the rest of Angel’s squad. The stuff with Lee is the best and the highlight of the novel. He proves his badassery in a grand way, using Bo’s Stoner, various weapons, and even his own teeth as he takes on the attacking squad, biting off one guy’s nose in a brutal brawl.

This is just Walker getting warmed up, though. After this insane fight, Lee briefly passes out – only to wake up as he’s getting pissed on. Turns out there was one more Sandanistan in that party. But while the Nicaraguan is busy shaking himself off, Lee grabs hold of the only weapon in his reach: a pair of pliers. First he rips off some of the dude’s dick, then he flips the pliers around and jams the barbed handles up the guy’s ass! For the coup de grace he blows the guy’s brains out with a Magnum. Given this, Bo’s confronation with Angel is spectacularly anticlimactic; they get in a brutal martial arts fight with Angel ultimately getting the upper hand, training a gun on Bo. However the series title Springblade not only refers to the name of Bo’s commando team but also to the Russian-made springblade knife he carries in combat – a knife he hasn’t used yet this volume. Walker of course saves this for this climactic battle.

Walker at times approaches David Alexander levels; there’s a great bit where Bo’s Stoner is referred to as a “death guitar.” And in addition to the copious gore we’ll occasionaly get combat description like, “Lee blew the point man’s shit away.” But it’s in the gory details that Walker really shines, with Lee at one point cutting a guy in half, from crotch to head, with the Stoner. The knife-fighting stuff isn’t as prevalent as last time, though when it happens it too delivers heaping helpings of bloody violence. There’s also a memorable moment where Bo offers Lee some speed, to give them a boost of energy.

So in the end, Springblade is kind of an anomaly. It veers a bit too close to “realistic” military fiction for me, but when the shit goes down it happens in a gory manner that’s more akin to what we expect from men’s adventure. At any rate I’m missing the next couple volumes, but will return to the series anon.
Posted by Joe Kenney at 6:30 AM