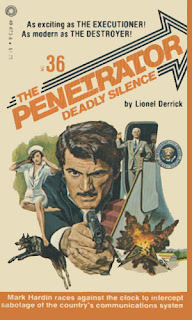 At this point my reviews of The Penetrator could basically be on autopilot: the rot has set in, each volume is a bland repeat of the one that came before, and the brutal vibe of the earliest volumes has been replaced by a generic tone more akin to a TV show of the day. Mark “The Penetrator” Hardin is a pale reflection of what he was, and goes out of his way not to kill anyone.

And once again the villain sucks; Chet Cunningham in particular has been delivering loser antagonists for his past several installments, like the sad sack computer programmer in #30: Computer Kill. In Deadly Silence he gives us two loser villains: one a guy who runs a “communications union” monopoly and another an old general who is being forced into retirement. The folks at Pinnacle only got the memo on the first villain because he’s the only one mentioned on the back cover. Indeed it seems Cunningham himself decided to change course midway through and to present a bigger villian for Mark to face, but sadly the communications union guy is the more memorable of the two, despite being fat and having long blond hair – hardly the villain one expects from this genre.

Cunningham takes his time getting into this one; we open with a sequence of various people in the communications industry running afoul of a shady operation calling itself the National Communications Council of America. One guy blows up some phone lines in New York at NCC’s behest, then another is killed by goons in California for refusing to comply with an FCC request. Gradually we learn that the NCC is run by Victor Jerele, the aforementioned loser villain, who runs the outfit from a palatial estate, his usually-nude mistress Mello Tone by his side. Humorously, Mello completely disappears from the text – as I say, Cunningham seemed to write this one in a hurry, changing his mind wily-nilly as he pounded out his first (and final) draft – despite initially being presented as a main character, Mello is anticlimactically dropped from the text.

Meanwhile Mark himself is just sort of lazing around the Stronghold…we meet him as he’s going on his daily jog and checking out the “Situation Board” to see what trouble spots have arisen around the country. Humorously, one of the situations Mark has been monitoring is the seeming monopoly of the communications unions…I mean you can see already the series is in trouble at this point. Surely there’s a terrorist to kill somewhere? Instead Mark poses as a cop on the handy police teletype he has in the Stronghold, querying on the FCC – he’s noted this name in two of the stories concerning suspicions communications-world deaths in the US. One of the responses Mark receives is from Goodman, the FBI agent who has been hunting the Penetrator “for over five years” and who has no idea of course he has just sent information to the very man he is hunting. Also I think Cunningham’s math is a bit off here as the series has been running for seven years now, not five.

Mark’s biggest lead comes from a cop in Phoenix, Arizona, pertaining to how one Victor Jerele of FCC briefly ran afoul of the authorities at one point. Posing as a reporter for the National Enquirer(!), Mark snoops around the FCC HQ, even gaining a brief phone interview with Jerele. The first whiff of action finally arrives in a brief “soft probe” Mark carries out on the HQ, using some of the knock-out darts in his Ava pistol to take down a pair of guards, one of them being a dog. But while leaving the site Mark picks up a tail, one of Jerele’s goons on a motorcylce. Here again we get a reminder that this is not the same Mark Hardin of the earliest installments – and surely not the brutal sadist who starred in Cunningham’s early installments. For Mark merely doses the guy with sodium pentathol, grills him for info, and then makes sure he’s nice and comfy until the effects of the drug wear off, after which the guy’s free to go!

The novel’s highlight occurs when Mark infiltrates Jerele’s estate, this time posing as a mad scientist…a ruse that Cunningham could’ve better exploited. Instead Mark whips out his .45 and gets in a shootout with Jerele’s thugs, but it all turns out to be a setup as Jerele knew Mark would show up eventually. Mark falls for it, returning gunfire and running for a door that suddenly opens in front of him. It turns out to be a cell of sorts, straight out of an old pulp; Mark is trapped and assailed by blinding lights and loud noise, and the walls are slowly closing in. Mark here comes off like a proto-MacGuyver, using various tools hidden in his belt and pockets to free himself, most notably a small strip of C-4 which he uses to blow off the door of the cell.

This leads to another memorable bit, where Mark is temporarily deafened. A recurring series schtick is that Mark gets hurt on the job, and Cunningham does a good job of capturing Mark’s plight as he escapes Jerele’s estate, unable to hear a thing but convincing himself it’s only temporary. Of course he’s ultimately proven correct, Mark’s hearing slowly coming back as he sits in his rental car, but still I wouldn’t advise setting off any C-4 charges just a few inches away from yourself. Mark’s hurt again at novel’s end, knocked unconscious and given a “minor concussion,” so Cunningham really delivers on the “Mark get hurts” template this time, though this latter part seems to exist mostly so Mark can hook up with a hot nurse at the conclusion of the novel.

Jerele seems to be the novel’s main villain, but Cunningham proves otherwise halfway through the novel. Mark’s learned that Jerele plans something big on this coming Sunday, and gradually determines that Jerele is going to black out the entire country’s communications network – but he’s being paid to do this. Mark learns the final details during a desert meeting with Jerele and a few thugs, a meeting that of course turns into a firefight. This section comes off like survivalist fiction, as all the cars are destroyed and Mark and Jerele, the only two survivors, are trapped in the desert. Again Mark Hardin shows himself to be a different guy from the early volumes; he gets the info from Jerele, tells him he’ll never survive in the desert, and hands him a .45 to take care of himself…which Jerele promptly does as Mark walks away.

Once again Mark is near death, stumbling through the desert. Cunningham page-fills – uh, I mean character-builds – with a random flashback to Mark’s ‘Nam days, one of the few times we’ve gotten to read about Mark’s time in the war. This is all due to a hallucination Mark endures due to heat stroke and thirst. He makes it through the desert but collapses, only to be saved by a truck driver – opportunity for Cunningham to dole out some CB and ham radio stuff he didn’t get to use back in #20: The Radiation Hit. After this Mark flies to California and drives to nearby Air Force base Edwards, having learned that a General Hemphill is the guy who paid off Jerele to black out the country on this coming Sunday.

But man it blows. Mark poses as a Justice Department officer and snoops around the base; we meet General Hemphill, that depraved bastard, while he’s playing bingo. While he’s playing bingo!! I mean good grief folks, it’s like when they’d make R-rated movies into TV shows back in the ‘70s and ‘80s, replacing all the “adult” stuff with middle-of-the-road banality. Anyway Hemphill is over the hill and being forced into retirement, so his foolproof plan is to cause a blackout and then, thanks to a lackey aboard Air Force One, redirect the President’s plane so that it has to land at Edwards. This accomplished, the President is directed to a “special area” the base has for VIPs…an area which is in fact built over an old prison. Thus the President has become Hemphill’s unwitting prisoner. And per the cover art by George Bush (not Dubya!!??) we can go ahead and assume the President is Johnny Carson.

The General is pulling a fast one on his base, thus there are no major fireworks of Mark taking on a battalion of rogue soldiers or somesuch. Instead, it all plays out on the maddening tepid vibe the series has now appropriated…Hemphill assumes that Mark is the rep sent from Washington, and proudly shows off his captured President. Mark uses the “wind walker” technique to slip past security and talk to the Prez, explaining the situation, which leads to a Mission: Impossible scenario in which the President poses as a patient on a gurney and duped base paramedics escort him and Mark off the base. After this Mark goes back to the base to boast to Hemphill that he’s freed the President! And here we have another villain doing Mark the favor of offing himself, Hemphill blowing himself up with his own explosions. Lame, folks. Lame!!

As mentioned Mark ends the novel recuperating in the hospital, where he manages to pick up a hot blonde nurse. He also speaks to the President over the phone, however an editing snafu prevents us from knowing what Mark says in response the President’s offer to increase Mark’s Justice Dept pay – the President being under the impression that Mark’s a Justice contractor. No matter. Deadly Silence is just another middling effort in the Penetrator, a sad reminder of how something once so unpredictable and fun has become so tepid and bland.
Posted by Joe Kenney at 6:30 AM