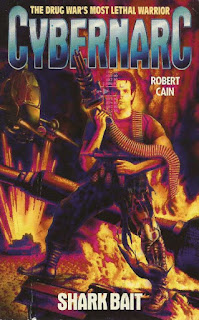 The penultimate volume of Cybernarc seems to pick up on the final scene of the previous volume – namely, Rod the titular Cybernarc watching as his human partner Chris Drake and his girlfriend Heather McDaniels have sex on the beach (literally, not the alcoholic beverage) – but later it appears that this is something Drake and Heather do fairly often. And apparently Rod must watch them from afar pretty often.

But of course I might be wrong and this does indeed pick up after the previous book; to tell the truth William H. Keith (aka “Robert Cain”) leaves it a bit vague. We learn that Drake and Heather are now an open item and have been for a few weeks, but the previous mission in Sicily is sometimes referred to as being fairly recent. It doesn’t matter, though. Keith still focuses on the same theme that’s grounded the entire series: Rod’s internal debate whether he’s human or not. Luckily though Keith doesn’t beat us over the head with this concept as Simon Hawke does in the somewhat-similar Steele (which I really need to get back to).

As we’ll recall, Rod used the PARET system to learn Drake’s battle skills and reflexes in the first volume, with the unintended side effect that he also picked up Drake’s grief and fury over the murder of his wife and teenaged daughter. Throughout Shark Bait Rod still grapples with this; he’s a robot, no emotions programmed into him, but he feels things akin to what he understands are human emotions. Keith thankfully steps away from the path he was seeming to build a few volumes ago, that Rod was developing rebellious tendencies toward Drake, Heather, and the other RAMROD scientists and technicians who serve as his family. This time the focus is solely on whether Rod’s feelings are “real.”

But Keith doesn’t beat us over the head with this, either. Like the previous volume, the majority of Shark Bait is given over to a single action sequence that just keeps going…and going…and going. It seems that Keith himself was struggling at this point, with the series itself. While the first and second volumes were fun, action-filled yarns with comedic banter straight out of the summer blockbusters of the era, starting with the the third volume a more sluggish vibe has descended upon Cybernarc. Inventive situations and wry dialog (particularly around Rod’s inability to grasp certain things) have given way to major action scenes that seem to exist mostly so as to fill pages. Another thing becoming more prevalent is the military fiction vibe, which I’ve argued before is completely different from the men’s adventure vibe.

We get straight into the action. Rod and Drake are sent over to Turkey to wipe out a heroin smuggler. An interesting note about Shark Bait is that Rod is the central protagonist throughout, particularly in the action scenes. For the most part Drake is relegated to the sidelines, seeking cover while Rod blitzes the enemy. This opening action scene is our first indication of this. Rod, in Combat Mode, first pilots in an Apache helicopter (flying being a new skill he’s been granted) and then runs roughshod over the smuggler’s base. Keith as ever displays an action movie-esque penchant for sending off villains in novel ways; here Rod hurls a pipe through the heroin smuggler before he can make good his escape.

Meanwhile the Mexican cartels have banded together to take down Cybernarc; in the intro we’ve already seen some creeps watching Drake and Heather from afar while they frolick in the sand and snapping photos of them – you almost think these two should start charging people to watch their beach escapades. Led by one of the Salazars, ie the cartel Drake and Rod dealt with in the first volume, they plan to kidnap Heather and use her as bait – presumably the “shark bait” of the title. We get a few sequences from Heather’s point of view as she’s abducted and then brutalized by her captors, lending the novel the tone of the average installment of MIA Hunter. Salazar keeps his men from raping Heather, though the threat constantly looms over her due to one of the thugs in particular. In time Salazar realizes he should put Heather’s mind to use, having her reprogram Rod to fight for the cartels.

This is something Rod himself deduces, whereas Drake and RAMROD honcho Weston figure the cartels just want to destroy Rod. Weston doesn’t go the expected “we can’t do anything to help Heather” route, instead coming up with a plan – Drake and Rod, in Civilian Mod, fly in to Salazar’s compound in Northern Mexico, “delivering” Rod’s Combat Mod. Rod pretends to just be a pilot, able to fool the bad guys into thinking he’s a normal human. Keith as ever excels in displaying the otherworldliness of Rod, capable of transferring his consciousness among a variety of interlinked bodies and devices.

Here we begin the massive battle sequence that will comrpise much of the novel’s runtime. The novel thing this time is that Rod’s in Civilian Mod throughout, still stronger than a human but not nearly as unstoppable as he’d be in Combat Mod. As mentioned Rod is the star here and for the most of the battle Drake’s on the sidelines, either hiding or sneaking around the compound and coming upon a huge stash of heroin. Their weapons memorably stored in the torso of the Combat Mod, the two take on an entire army, and Keith this time keeps bringing up Rod’s battery power and how the fight is wearing it down, particularly when he takes on a couple tanks and armored jeeps.

Another thing that’s gradually disappeared from the series is the gore factor; Rod wipes out a ton of cartel soldiers but it’s rendered in an almost PG-13 tone. Also the battle goes on way too long, with lots of chapters ending on cliffhangers as Rod sees a tank coming for him or whatever; the fight goes well past its expiration date, and it seems clear that Keith is filling pages. And meanwhile Heather isn’t even here, having been taken away by Salazar and fellow cartel sleazebag Contrera to another cartel stronghold, a few hundred miles away. Speaking of which Keith has a grating tendency to only use the metric system.

This takes us into the next and last major setpiece; Drake and Rod race against time to cut off Salazar and Contrera before they can get to their destination, where they’ll be informed Cybernarc has run roughshod and destroyed everyone at the previous location. In other words Heather will for sure be killed, as they’ve already threatened her death if Drake and Rod go against their orders. Here Rod’s depleting battery is really rammed home, as he’s down to around twenty percent and, still in Civilian Mod (because it would take too long to transfer him to Combat Mod), about to engage another army in battle.

This is handled via another long action scene, wth Rod piloting an Apache and taking out hordes of cartel soldiers. We get more interesting stuff with a return of the Spider remotes, so memorably introduced last volume; Drake fires them into the fortress stronghold and, when he’s able to, Rod transfers his consciousness to each of them to see which has come upon Heather’s hiding place. And while Heather spends the majority of the novel in captivity, Keith does give her a nice bit of revenge on her captors. After this the novel climaxes again on an action movie vibe with our heroes chasing down a runaway plane, one of the villains getting chopped into burger by propeller blades.

At over 200 pages, Shark Bait moves a bit sluggishly, mostly because the characterization and fun dialog of previous books have been replaced by endless action scenes. Also the military fiction vibe is strong, with lots of acronyms and “realistic” data on such and such weapons. Hopefully the final volume of Cybernarc restores the series to what it was.
Posted by Joe Kenney at 6:30 AM