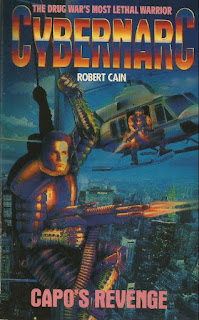 By this fourth volume Cybernarc has moved away from the action movie-esue vibe of the first volume, with its bantering lead protagonists and large-scale action scenes, and become more of a sort of military fiction deal. Gone for the most part is the bantering, and William “Robert Cain” Keith replaces it with a lot of weapons acronyms and shoehorned data about drug smuggling, the Mafia, and Columbian gangs.

It’s the early ‘90s so we’re hot on that “super predators” tip, as Hillary C. infamously referred to the black drug gangs at the time. (At the very least, it gave us a cool Massive Attack song.)  But the novel is filled with the paranoia that unchecked drug running and crime and the like would descend the US into urban warfare within a few years, a la Predator 2 and etc. Throughout Capo’s Revenge we’ll get panicked reports of what unchecked drug-running may eventually lead to, particularly given that the notoriously savage Colombians are about to engage in war with the Mafia.

It’s five weeks after the previous volume and Chris Drake and his android pal Rod have moved into their new digs at Pirate’s Cay, the Bahamas. Keith injects a bit of a body horror vibe with a few scenes of Rod being dissasmbled and put back together, usually with his head gorily removed from his “Civilian Mod” body and put in his “Combat Mod” body, or vice versa. The novel in fact opens with a scene featuring Rod in the former body, crashing a party in Florida and trying to make off with a Comlumbian bigwig in the melee, but failing to catch him. This scene inspired the atrocious computer-created cover art, featuring a machine gun-wielding Rod versus a helicopter.

We’re often reminded that the events of the first volume were a year ago, and Drake still simmers with sorrow and rage over the murder of his wife and daughter therein. Translation: as usual, there will be no hanky-panky in this particular series. At least until the very end, when Drake finally decides to move on – and, uh, promptly bangs Dr. Heather McDaniels, hostuff blonde babe scientist on the RAMROD initiative. However we’re given no sleazy details, this being an early ‘90s men’s adventure/military fiction hybrid sort of thing. That being said, Rod does watch stalker-like from afar as the two have sex.

But I’m getting ahead of myself. James Weston, CIA spook who runs the show, flies in and tasks our duo with their new objective: stop the Mafia and Columbians from warring. Off they head for Manhattan, where they find the local consiglierie murdered in his own home, his family massacred. Keith excels in showing how Rod detects things humans cannot; with his far sight he spots a Latino dude watching the house from a parked car, and further detects traces of blood and other fluids on his clothing, all of it invisible to the human eye. Rod breaks the dude’s arm and interrogates him at Drake’s instruction – Drake being particularly driven this time around to kill all the druggers – and soon the two are in a huge gunfight on the streets of New York, complete with even a trip to the sewer system and a mention of the long-running “alligators in the sewer” urban legend.

Another element familiar from early ‘90s action: the stupid chief. This would be Weston, who chews Drake and Rod out good and proper, screaming about how they went above and beyond their objective, pissed on civil liberties, and basically broke every law in the book. To go all the way with the cliché, he even calls them a pair of “loose cannons.” Weston threatens to shut down the program and send Rod back to the lab, but it all comes off like page-filling. Which, sadly, Capo’s Revenge is filled with. In most cases the padding is courtesy expository dialog about the Mafia, as follows here, Weston going on and on about a particular family’s history and its dealings on the drug front. Much of this stuff is skimmable.

After their ass-chewing Rod and Drake (I always want to type “Rod and Todd”) are sent to Sicily, as it’s been determined the mobsters, under the visonary guidance of a capo named Grecco, are meeting to determine how best to handle the Colombian threat. Rod, being a robot, merely downloads a language program and thus can speak in fluent, accentless Italian, but also, being that he’s a robot, he asks the suspicious natives all sorts of blunt questions. This leads to the expected action scene, a bit sooner than expected, as Rod and Drake, armed with only pistols, defend themselves from an ambush by lupara-wielding local Mafioso.

Keith fills pages with lots of cutovers to the Mafia characters, discussing and arguing about what to do; Grecco has them in an ancient clifftop castle, guarded by an army of heavily-armed goons. Practically 75% of Capo’s Revenge is dedicated to Drake and Rod infiltrating the place and then battling the occupants – a running action sequence that goes on for a staggering 100 pages. So far only The Hitman #3 has come as close to padding out the pages with such an extensive, exhausting action scene, but like Norman Winski, Keith excels at such stuff, and gives good gore. That being said, Capo’s Revenge isn’t as gory as the previous installments.

It starts off with Rod again trying out his Sea Mod setting, which entails Rod in his Combat Mod body being put inside like an armored boat. From there he and Drake perform a soft probe of Grecco’s Mafia summit, to discover that the capo plans a total war of atrocity against the Colombians, killing them all – men, women, children. After a quick radio call to get approval from Weston, our heroes determine there’s only one option: for them to kill all the Mafia bastards, right here and now.

So begins the extended action scene, and it’s a testament to Keith’s skill that it never seems to drag or bog the reader down with deadening banality. I mean just imagine a 100-page action scene by Joseph Rosenberger. You’d be looking for your cyanide pills by the fifth page. “Anything – just make it end!” Ever the researchers, Rod and Drake use the opportunity to try out their new Heckler and Koch CAWS auto shotgun things, ie “Close Assault Weapons Systems,” which of course bring to mind the weapons used in the almighty Able Team #8. It appears these guns never got out of the experiment stage, but boy the way Keith has his heroes employing them you wonder why the US military never moved forward with the things – they kill people real good.

Keith delivers memorable moments throughout. Rod now has this new roving camera robot device called a “spider” which he can shoot via grenade launcher into some remote area; the spider activates and crawls around, recoding both video and audio, and Rod can transplant his entire consciousness into the thing, controlling it from afar. This is interesting enough but Keith adds a novel scene where Rod, his mind in the spider, acts as a forward observer, on the ground with the mobsters, directing Drake’s fire as the ex-Navy SEAL charges in with CAWS blasting. And there’s plentiful gore throughout; one of the charges for the CAWS fires flechettes, and sundry Mafioso are ripped to bloody shreds. Another memorable sendoff has the titular capo harpooned.

In the bloody melee Chris Drake experiences a sort of catharsis, or something; there’s a part toward the end where he opens up on full flechette fire on a group of escaping old mobsters and whatnot, chopping them up, then hears a woman screaming that there are kids nearby. And Drake pulls his finger off the trigger…and feels real great about himself. Because he didn’t kill the woman and the kids(!). But otherwise he shoots to pieces every mobster he encounters, then he and Rod make their escape. After which we flash forward a few weeks, where Drake, sort of reborn now, admits to Heather McDaniels that he’ll “never forget” his dead wife and daughter, but hey, all that is like so last year, so let’s screw in the sand. Oh and Rod watches from afar, grappling with his own jumbled robot emotions, ultimately concluding that he’s not human and will do just what he was built to do – kill drugger scum!

There were only two more volumes to go, so here’s hoping the next ones get back to the action movie vibe of the first one.
Posted by Joe Kenney at 6:30 AM

I’m a fan of Cybernarc, but I’m not sure I’d want to read a 100-page action scene. It sounds like there’s some other cool stuff in there too, though.