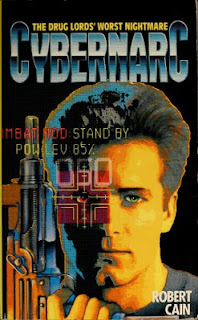 This obscure, six volume series might be untapped gold. You can hardly find anything about it online, other than this background info on the author’s website, “Robert Cain” being a psuedonym of prolific series author William H. Keith. But I’m here to tell you that, desipte the lack of reviews or online awareness, Cybernarc is friggin’ great, one of the best first volumes of a series I’ve yet had the pleasure to read.

If you check out the link above, you’ll see that the original plotline of the series was about “a whacked-out Vietnam vet” who built “a robot in his basement in order to take out drug lords all over the world!” Now, Keith went in a different, more “serious” direction, but damn if that original concept doesn’t sound so wacky and absurd as to be awesome. Regardless, Keith chose to favor more of a realisitc approach, but make no mistake – the protagonist of this series is a robot, and indeed one who takes on drug lords all over the world.

Like the abysmal Tracker series, the covers for this series mislead you into thinking it’s a sci-fi, “near future” sort of thing. In reality, Cybernarc takes place in the year it was published, 1991. It details the adventures of Rod, a human-looking robot created over the past two decades under CIA funding, a two billion-dollar construct that is the one and only output of the RAMROD initiative (“Rod” getting his name from the last three letters of the program’s name).

The idea was to create an army of android soldiers, but the project was so complicated and costly that Rod is the only prototype. He appears like a normal white male, with sandy brown hair and a “regular guy” sort of look. However he is capable of feats beyond normal humans, especially when he’s placed in “Combat Mod,” when Rod’s “Civilian Mod” body is replaced by a larger one of black titanium steel; in this mode he is basically a tank on legs.

Rod’s “teacher” is Chris Drake, a Navy SEAL and the co-protagonist of the series; like the Destroyer books, Cybernarc is built on a dynamic and rapport between two entertaining protagonists. In another divergence from the publisher’s original plotline, Drake isn’t a ‘Nam vet; instead, he’s only been a SEAL since ’79 and has racked up his extensive experience in covert ops. He has been chosen to be Rod’s combat instructor; the robot learns things through PARET, a cybernetic sort of mind-meld which allows him to learn directly from a teacher’s brainwaves.

This first volume details Rod and Drake’s entry into the war on drugs; true to the era in which it was published, Cybernarc is very concerned with drug barons and the increasing cocaine and crack pandemic, with the oft-stated fear that “within a few years” the streets of the US would become centers of open warfare among rival gangs. (As seen in such 1990 “near future” films as Predator 2 and Robocop 2; see the compelling but controversial book Freakonomics for a compelling but controversial reason why this future never happened. It has to do with the Roe vs. Wade decision…)

But again, this first volume takes place in 1991 and taps into two then-popular items in pop culture: action movies with drug lords as the villains (practically any Steven Seagal film of the time), and, of course, The Terminator. In fact I’m sure it’s not just a coincidence that this book was published around the same time that Terminator 2 came into theaters. Rod though is much more “human” than the Terminator, and a compelling theme of the novel is how, due to his PARET interactions with Drake, the robot is becoming more and more human.

This really comes to bear when Drake suffers a horrible tragedy in his personal life. The novel’s first action sequence has Drake in Columbia, where he’s to exfiltrate a DEA agent who’s gone undercover among the Salazars, a powerful drug-running family. The mission goes to hell when one of the DEA agents on Drake’s team, a bastard named Delgado, turns out to be a Salazar employee. Drake’s the only person able to escape the ambush and massacre. But the drug lords send Delgado and a team to Drake’s home and rape and murder Drake’s wife and daughter.

This harrowing scene sticks with you, as Drake arrives home just as it’s going down, and though he’s able to fight off his attackers, it’s too late to save his family. But since Drake is the only person to have seen the turncoat Delgado, the idea arises that via PARET feed Rod can see into Drake’s memory and print out a scan of Delgado’s face. This gripping scene has the outcome that Rod picks up not only on Drake’s memories but his emotions as well, something supposedly impossible for a robot, and comes out with feelings of loss, remorse, and hatred.

More action ensues as the drug barons continue to try to kill Drake. A great sequence has Drake and Rod attacked on the busy highways of DC, and this turns out to be Rod’s first taste of combat. Keith stays “realistic” with the action scenes, but when Rod goes into combat he’s free to veer into fantasy; simply put, Rod is a damn monster in battle, tearing off heads, pulling wheels off cars and hurling them with such force that they cause heads to explode, and gunning down people with unnering accuracy. It’s at this point you see how promising this series will be, as Keith delivers exactly the sort of stuff you want.

Just as importantly, Keith knows how to trade off between action and plot/character development. The novel is perfectly rendered in this regard…and hell, Keith doesn’t even POV-hop. He shows special skill with the scenes from Rod’s point of view; though you (and the characters) begin to think of Rod as a human, Keith will show how he’s so inherently different, capable of things beyond us but unable to grasp basic things like emotions or social dynamics. This of course leads to several humorous incidents, like when Rod blabs freely to two reporters that he’s a “top secret” robot because he’s never been specifically instructed not to say such things, and also his numerous attempts to learn how to tell a joke (this in particular elicits several action movie-esque one liners).

The biggest action scene has Drake, Rod, and a new team of SEALS head into Columbia, storming the Salazar fortress in an attempt to abduct Delgado. Here Rod is in Combat Mod, and we have such great moments as his ripping a .50 caliber machine gun from an armored car and firing it as a normal person would fire an assault rifle; he also tears apart another armored car with just his titanium-steel hands.

Drake also gets in on the action, doling out gory death with his Uzi (due to the PARET sessions, Rod too now favors an Uzi) and a Heckler and Koch automatic shotgun. The action scenes are nice and violent, by the way; in fact the only thing the novel’s missing in the pulp area is sex, but then what could you expect in a novel in which one of the protagonists suffers the loss of his wife and daughter. I guess the sex stuff will come up in a future volume…

I could rave on and on about this book. It was easily one of the best action novels I’ve yet read, and I’m super excited I lucked into the entire series for a pittance. The novel ends with Rod and Drake pledging to wage their own war against the drug lords of the world, and I can’t wait to read more about it.
Posted by Joe Kenney at 6:30 AM

Wow, sounds cool. I'll add it to my hunting list.

Was interested to read about this one, as I remember the author from the Traveller (sci-fi roleplaying game) adventures and other gaming materials that he and his brother J. Andrew wrote back in the '80s.

It would seem quite a few successful paperback sci-fi/fantasy/action novelists got their start in the rpg realm (Matthew J. Costello, Aaron Allston, Mike Stackpole among others).

@horrox, that's where I've seen that name before - I think he wrote a bunch of Battletech novels back in the day.