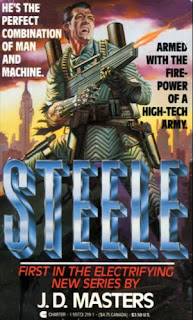 Very much inspired by Robocop, the Steele series is a late-era example of the men’s adventure genre, bringing in elements of sci-fi and post-nuke pulps. It ran for quite a while, racking up eight volumes. The first six books carried the “J.D. Masters” byline, which apparently was a psuedonym of author Simon Hawke; the final two volumes were credited to “S.L. Hunter,” but supposedly these too were by Hawke. I’m not sure on this, and can find no other name connected to either psuedonym.

The series takes place midway through the 21st century; the world has been ravaged by a series of cataclysms. First and foremost terrorists unleashed a biological virus a generation ago which did more damage than even the terrorists expected, knocking out half of the world population. Years later and the virus now manifests itself in “screamers,” ie people affected by the virus who lose all sense of control and go into fits of rage, destroying everything in sight.

Also there was a limited nuclear engagement due to the biological warfare, but the series is not a post-nuke pulp, despite the nuking and the mutants. The country has already gotten back on its feet, with people going on about their normal lives; the nuclear and biological warfare background exists mostly so that Hawke can present a sort of ravaged future, one where inner-city warfare wages in the blasted ruins of cities.

Our hero is Donovan Steele, a 43 year-old Lieutenant in the New York City Strike Force, a sort of Delta Force SWAT team. Steele’s been patrolling the blasted streets of Midtown for two decades, watching as Manhattan and Long Island and other New York areas have been taken over by warring gangs and mobsters. DC was destroyed in the nuclear engagement, so now NYC is the seat of what still exists of the US government, despite which many of the surrounding areas are cordoned-off Escape From New York-style hellholes.

Steele’s a tough bastard, just as you’d expect. His backstory has a ring of dark comedy to it, as Hawke relates that, when Steele was 16, his mother became infected with the virus and became a screamer, coming home to eat her children; it all ends with everyone in Steele’s family dead, capped off with a bit where his dad, also infected, blows out his own brains, and I’ve gotta say, despite the grim tone it all really came off as sort of funny due to the outrageous factor. Anyway, Steele became a cop soon after and is now basically the star of the Strike Force.

A unique quality about Steele, at least so far as men’s adventure protagonists go, is that he’s married and has two teenaged sons. However Steele’s wife Janice is only mentioned in backstory, and Hawke paints a nasty picture of her…she sort of loves Steele but also hates him, mostly because of his job, and is carrying on “a few” affairs behind his back. Hawke has his reasons for doing this (most likely so he can get rid of her once Steele has his Robocop-esque experience midway through), but still Janice amounts to a pretty despicable character.

We know from the cover that Steele is going to become some sort of robot cop, but it takes over a hundred pages for this to occur. First Steele is assigned to work with Project Download, a government initiative run by a shady guy named Higgins that’s looking to “download” the combat insticts from Steele’s brain via software and store it into the brains of draftees and whatnot. Here Steele meets Dr. Susan Carmody, who comes on cool but is eventually throwing herself at him (not that Steele takes advantage of the situation).

After a gangland ambush leaves him mostly dead, Steele awakens several months later to find that he’s now a cyborg. His arms and legs have been replaced by android steele, as has been his skull and, most importantly, his brain is also now a computer, one that holds all of his downloaded memories. This serves to take up a huge portion of the narrative, as Steele constantly asks himself and others if having a robot brain means he is no longer human. Hawke makes it clear that he is, though, and also Steele still looks human, synthetic skin covering his robotic ligaments. In fact he looks identical to how he did before his accident, much to the confusion of his comrades, all of whom are now unsettled in his presence.

Steele’s relationship with Susan Carmody deepens, with her constant assurance that Steele is still very much human. As she often reminds him, he can procreate (his naughty parts survived his “death” unscathed), but for some bizarre reason, despite building it up so much, Hawke skips over the eventual sex scene between Steele and Susan. I only say it’s weird because another big concern of Steele’s is if he can still have sex, and when the moment arises Hawke just flashforwards to after the fact. Purple prose aside, it would’ve been a good opportunity for Hawke to again show us that Steele is human despite his cyborg makeover.

Just like Robocop, Steele is eventually sent back on the streets to patrol and kick criminal ass. Unlike Robocop though Steele still retains all of his faculties and makes his own decisions; again, Steele is pretty much identical to the person he was at the novel’s start, only now moreso…he can take all sorts of damage, can mete out horrendous punishment, and can run faster, jump higher, etc, etc. In other words the series wants to have its cake and eat it too; Steele is inhuman while still being human.

A mafioso named Borodini has united the various gangs (most of them split along ethnic lines) under his rubric, and Steele wants to crush the bastard, mostly because Borodini was behind the ambush that turned Steele into a cyborg. The ambush however was launched against a black gangster named Ice; Steele just got caught in the crossfire. Now Steele attempts to find Ice again, so that the two can work together against Borodini. Here we have several battle sequences, Steele testing out his new body against a small army of gangmembers.

But where Steele #1 fails is in the action department. Hawke delivers the few action scenes in an almost outline format, such as, “Running down the stairs, Steele fired, killing them all.” Dammit, I want exploding guts and blasted-out brains! But the gore and violence factor is minimal here (as is the sex factor), despite the number of gangmembers Steele kills. In other words, the book would easily rank a PG-13. It’s odd because Hawke will often go into gun-porn detail on the weapons Steele carries, but when it comes to showing what those weapons will do to a human body, he doesn’t elaborate.

By novel’s end Steele has been “discovered” by the local media, who exploit his feats on the news, thus putting Steele (and those he cares about) on the radar of the crime lords. After suffering more damage in another outline-style action scene, Steele is about to undergo another round of “updating” when the novel comes to a close, with nothing resolved, Borodini still alive, and the implication that Ice is about to become Steele’s partner on the streets.

This is one of the better-written men’s adventure novels I’ve read, but this first installment is more focused on world building and scene setting, and very focused on characters and their emotional arcs. I mean, there’s even a long subplot all about Steele’s friendship with Father Liam, a local priest who goes drinking with Steele and listens to Steele’s soul-baring confessions over endless rounds of beer. You could easily be fooled into thinking this is just a “regular” novel and not the first volume of a series. I’ve managed to get the entire series at a very nice price, and looking through future volumes it appears that the storylines get more pulpy and action focused, but then that might just be the customary back cover hyperbole.

So while it doesn’t offer much from the standard men’s adventure department, Steele #1 is still a very good read, compelling and gripping in its own way, offering more characterization than any other series I’ve yet read. It just needs more exploding guts and blasted-out brains!
Posted by Joe Kenney at 6:30 AM

Hey, don't they all?

Pretty cool to see how all these sub-genres pop up; now we've got what, three or four different titles in the the "robot/cyborg one-man army" sub-genre of Men's Adventure? I'm sure there's more.

I liked the Horn series better.

Whew! Glad this book didn't suck, at least, because I also picked them all up not too long ago. They looked a wee bit goofy, but affordable series I could complete are starting to get rare, so I went for it. Now I just gotta get back into reading 'em... I've been sidetracked lately, reading horror short stories and classics and stuff. But, it's good to know that the Steele books waiting for me aren't *bad,* even if they could use more flying viscera. :) Keep up the good work!

The author actually is victor milan under a psudeo name