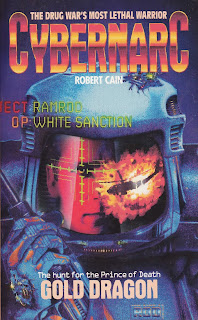 Picking up two months after the first volume, the second installment of Cybernarc is all about the action, as if “Robert Cain” (aka William H. Keith) is attempting to make up for the lack of it in the previous volume. Not that Cybernarc #1 didn’t feature much action, but as with most other latter-era men’s adventure novels it was moreso focused on introducing its characters and series concept.

Gold Dragon on the other hand opens with an action sequence and remains heavily action-minded throughout. We meet our titular Cybernarc, Rod the robot, as he’s crashing into a Hong Kong high rise hotel that’s filled with “inhuman monsters called drug lords” (as the back cover copy so hyperbolically refers to them). Rod, in Civilian Mod (meaning he looks like a regular human) and armed with a subgun, blasts his way across various floors as he hunts and kills a trio of Chinese drug lords (Feng, Hsu, and Cho) who happen to be in the hotel.

Spotting for Rod in another room in the hotel is Chris Drake, Rod’s SEAL partner and “friend.” As in the previous volume, Rod’s burgeoning hummanity plays a central role in Gold Dragon, with Rod learning what it means to be a friend, leading to some downright touching scenes – that is, touching amid all of the exploding heads and guts. Speaking of which, this second volume is a little less gory than the first one; to be sure Rod does rip people apart at times, often hitting men so hard that his hand impales their entire head, but these moments happen less frequently than they did in Cybernarc #1.

Rod succeeds in blowing away Hsu and Cho, but Feng escapes in a helicopter, and Rod is heavily damaged in his own escape, which sees him swinging via a long cable down to Drake’s hotel room window. Terminator style Rod’s face has been scraped off so that the black metal skull beneath is visible, which makes for a nice horror vibe during the action scene, as Chinese combatants drop their guns and run screaming from the terrifying sight. There follows a memorable bit where Drake uses an iron to fix Rod’s face, pulling the latex skin so that it looks as if he’s a regular human who just suffers from a bad facial scar.

Feng was the prime target of the hit, and as they repair to Mobile One, aka a retrofitted 747, Rod and Drake briefly meet up with James Weston, head of Project Ramrod, and Heather McDaniels, chief programmer and resident hot stuff who has yet to start up the inevitable romance with Drake – though given that Drake’s wife and daughter were horrifically murdered last time around, I guess we still need to give the guy some time to move on. In fact, and likely due to the era in which it appeared, Cybernarc is barely focused on sex at all – for example later in the book Rod and Drake meet up with Tai Song, a pretty young woman of Hmong/American descent, and the Drake/Song romance expected from tradition never happens.

A DEA rep named Lassiter informs the group that Feng is likely in Mongyin, Burma, a location deep in the jungle in which the drug lord employs the sadistic General Aung to run a heroin factory. Lassiter wants Rod and Drake to parachute in via High Altitude/High Opening and do some reconnaissance. Yep, it’s all just like in Rambo: First Blood Part II, with our protagonists dropping into the exotic jungle with strict orders not to fully engage the enemy. And just like in the movie they of course decide to do their own thing.

Rod, now in Combat Mod (meaning he’s built like a football linebacker, only with black titanium skin), parachutes into Mongyin with Drake, each of them packing light for the mission – Drake carrying a FN-FAL rifle and Rod an Uzi. Meanwhile we meet the pretty young Tai Song, who we learn would be considered beautiful by Western standards, but is generally overlooked by the men in her Hmong village here in Mongyin – again, all of it seemingly building up the potential for some good lovin’ courtesy Drake, but the author bypasses this; indeed Tai Song is eventually relegated to “translator” status and is shunted out of the narrative with little resolution.

First though we have a climatic rescue scene where Song, as we meet her, is dragged from her hut by General Aung’s troops and tossed into a cage which is hung in the town square. Rod and Drake, coming across the village after working through the jungle, immediately decide upon a lightning strike so as to save the girl. We learn though that it’s a trap – back in Hong Kong, while storming the hotel, Rod came across a nude Columbian woman in one of the drug lords’s rooms and let her go, deeming her a hooker or whatever and thus unimportant. Turns out though that it was Ramona Montalva, daughter of a high-ranking Columbian druglord, and Ramona was in Hong Kong to start a partnership between her family and Feng, even sleeping with one of Feng’s cronies to sweeten the deal.

Having seen what Rod is capable of first-hand, Ramona has now gone to Feng to warn him. Their gambit is to set a trap with the pretty, Western-looking Tai Song as bait, but of course Rod and Drake manage to waste all of Aung’s soldiers as they save her. The Hmong are born warriors and thus they now want a piece of Aung, who has ruled over them sadistically, even butchering people who have slighted him and roping their corpses to trees as warnings to others. So then Rod and Drake now have a native army as they go on deeper into Mongyin to assault Aung’s heroin lab – this being very much against orders, Rod having received a satellite-relayed message that the two of them are to proceed out of Mongyin asap.

Actually Gold Dragon is also like an installment of MIA Hunter (except with a robot!), as it indulges in the tropes that series is known for, including the traditional battle against a heavily-armed PBR boat along the Mekong river. The assault on Aung’s heroin factory is appropriately epic, with Rod tearing a Russian-made automatic grenade launcher off of the PBR and firing it submachine gun-style from his hip. The violence factor here is also large, culminating in the reveal that Song gets vengeance on Aung by hacking off his head in true Hmong fashion.

However, Feng has friggin’ escaped again, and once again Drake and Rod launch an attack, this time on Feng’s ship as it readies to disembark from Thailand. Feng again manages to escape, and in the course of this battle Rod is nearly destroyed and Drake is captured. This sets the stage for the climax, in which Rod, again in Civilian Mod (his Combat body damaged beyond repair), parachutes onto Feng’s ship as it sails through a stormy sea and blasts his way across it in search of Drake.

Ramona Montalva appears again in this finale, and we see that she’s truly in the Pulpy Evil Female mold I so enjoy; Feng trusses up a nude Drake and has his men torture him for intel, all while Ramona stands nearby licking her lips. There’s a very uncomfortable scene where she even grabs hold of his balls and squeezes them. But as these things go, Ramona doesn’t get killed during Rod’s storming of the bridge, and indeed our heroes go to great lengths to ensure they get her off of the ship in one piece, keeping her alive so as to eventually interrogate her. Methinks Ramona Montalva will play a larger role in future volumes, but we’ll see.

This final battle is one of those sequences the author excels in; Keith is great at delivering climatic battles that resonate both from an action standpoint as well as the emotional, with Rod the robot consumed with worry as he desperately searches for Drake. And the author turns it around with Drake, after being rescued, battling to get the critically-damaged Rod safely off of the ship.

So far the Cybernarc series has come the closest of all the men’s adventure series I’ve read to capturing the feel of a big budget summer blockbuster – I mean like the kind they made in the good old days, when they were action-focused and rated R. With the thrilling sequences, witty banter, and strong characterization, the series offers a whole lot more than you might expect.
Posted by Joe Kenney at 6:30 AM

I'm pretty sure I read a few in this series, back in my highschool days. That cover looks awfully familiar, and I definitely remember the ship battle.

I've just read Cybernarc #1 (thanks to your review) and loved it! This one sounds like a blast, too.

Thanks guys, for the comments. Bob, the ship battle is definitely memorable, and very cinematic. Lee, glad to hear you read Cybernarc #1...if you enjoyed that one, you'll definitely enjoy this second volume!

Great reviews! I found Cybernarc #2 and #3 at a thrift store a few weeks ago and really enjoyed them. I hope to find the rest of the series someday.

As you pointed out in your review of #1, there’s a short blurb about the series at the author’s website. He says “Cybernarc was...how shall I put this? It kept us eating for a year.” At first this sounded to me like he regretted the series or was not fond of it, but upon rereading the blurb just now I see that he also says “The series wasn’t that successful, but I had a lot of fun with it while it lasted,” so maybe his hesitation in the first quote just means that it wasn’t a big hit.

I certainly liked it, anyway.

Keith would eventually take over the "Bolo" series (about future sci-fi war where human commanders partner with computer-operated tanks) so I guess he just kept coming back to this particular well...