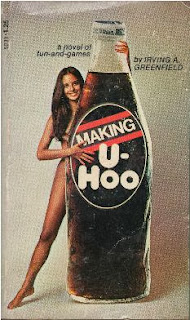 The playful title is apt – the characters in this novel “make yoo-hoo” in both the literal and the figurative sense. Sales for a previously-low tier soft drink called U-Hoo (a citrus-lime soda clearly modelled on Sprite) have gone through the roof, basically destroying the profits of larger soft drink manufacturer SDA (read: Coca-Cola). Protagonist and sometimes narrator Bart Sherriff, a consulting ad whiz, is called in by SDA to find out what’s going on.

I say “sometimes” a narrator because most of Making U-Hoo is in third-person, but Greenfield will arbitrarily jump into Bart’s perspective for several first-person sequences. Sometimes it’s when he’s meeting with clients, other times when he’s just walking around (strangely though, none of the actual sex scenes are written in first-person), so there seems to be little rhyme or reason to the perspective changes.

Bart Sherriff is a totally ‘70s protagonist; he’s in his 30s and lives in a swinging bachelor pad in Manhattan complete with a round bed and a stereophonic system that’s hooked into a fancy lighting system, so that various colors will flicker in accordance with the mood of the music. He’s such a successful advertising man that he rents out his services, charging high dollars for his consultations. Just as importantly, so far as the narrative goes, he’s also a big success with the ladies, able to score with ease.

We see Bart handling a few accounts before he’s called in by SDA president Knowles to handle the U-Hoo situation. Knowles states that the problem threatens the national economy, and it’s so bad that people are bootlegging U-Hoo, buying it off shelves and reselling it at a massive upcharge. After accepting the job Bart realizes he’s being followed, and soon discovers that the Feds are on the case, shadowing his every move.

Not that this prevents him from sleeping with the first of three conquests in the novel, this being a gorgeous blonde SDA secretary named Sandy, who just started working at SDA, is happy to go home with Bart, and is obviously an FBI agent (though it takes Bart a while to realize this). In the ensuing sex scene Greenfield takes us completely into the shagadelic ‘70s, with the couple engaging in explicitly-rendered sex on Bart’s round bed while stroboscopic lights flash around them.

Greenfield lazily works up a mystery here, but the novel is moreso in the light humor vein, with no violence or deaths or anything of that nature. In fact when Bart is confronted by a pair of FBI goons he’s easily able to fool them into thinking he himself is a G-Man, and then gets the guys drunk and sends them on their way. This after the trio have watched a televised speech from the President (clearly Nixon, though he isn’t named – and there’s a fair amount of President-bashing throughout the novel, again firmly rooting it in its era), in which the President informs the country of the “soda conspiracy” and requests that everyone buy a can of pop the next day.

It’s his ruse to further throw off the Feds that leads Bart to his next conquest, a brunette model named Lois. The focus of the most sex scenes in the novel, I guess Lois is the closest we get to a female protagonist. Bart calls in a crazy friend to throw a costume party in Bart’s apartment, so Bart can take off in the fray and leave the Feds to wonder what happened to him. He tells his crazy friend to bring along anyone he knows; one of these people happens to be Lois, who offers her place to Bart as a safe place to stay, and thus moments after meeting each other they rush back to her place to screw. Ah, the ‘70s.

Greenfield serves up another pages-long sex scene here, miles beyond the metaphor and analogy-ridden purple prose you’d encounter in say the Baroness series, with graphic depictions baldly rendered…though not with the outrageous aspects of Harold Robbins or the boring, repetitive, and mechanical sex descriptions you’d find in a vintage sleaze novel like Flowers And Flesh. One thing I’ve noticed though about Greenfield is his tendency to always mention what his female characters taste like, if you catch my drift.

Making U-Hoo runs at 251 pages of fairly big print, and I figured most of those pages would be given over to sex scenes, but that’s really not the case. In fact Greenfield seems determined to deliver an actual story, one that’s couched in goofy humor and the occasional sex scene. Most of the novel is focused on Bart’s inner monologues and his thoughts and feelings on various things as he traipses around ‘70s New York City tracking down clues. However the U-Hoo “conspiracy” stuff is not given enough weight or focus to classify the novel as a thriller or anything of the sort. Again, it’s more of a comedy.

In fact the whole mystery angle is rendered moot in the reveal, when Bart meets Flosie, a black masseuse. While giving Bart a handjob she casually informs him that she’s behind the “conspiracy,” having spread the word that the black community should “get whitey” by buying up one brand of soda and then gouging the market with inflated resale prices. Bart thanks her by paying to have sex with her, having already broken off his days-long relationship with Lois. In fact the women just abruptly drop out of the narrative once Bart’s done with them, and Greenfield intentionally or not builds ill will against his protagonist, as it’s clear that these women develop feelings for Bart, particularly Lois, but he could care less.

I’m sort of on the fence with Making U-Hoo; I enjoy Greenfield’s writing and the dialog he gives his characters, but the plot is middling and forgettable. However the book works as a nice capsule of early ‘70s New York and the fashions of its hipper denizens, which always results in high marks from me. I guess I’d end by saying you should maybe check it out if you come across it for cheap, but it’s not worth going to great lengths to hunt it down.
Posted by Joe Kenney at 6:30 AM