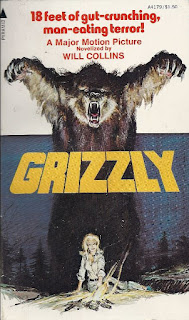 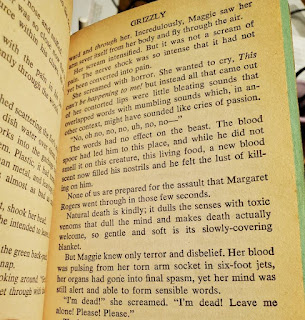 Another thing the story doesn’t waste time on is people refusing to belive they are in a horror novel – I’m no expert on the genre, but “I don’t believe in any stupid old monsters!” seems to be a recurring schtick in it. That doesn’t happen here, so far as Kelly Gordon and his fellow rangers go. They come across the bloody remains of the girls and immediately know a bear is amok, promptly taking the necessary safety precautions. We get a bit of detail on how wildlife parks operate – Kelly is adamant that the rangers moved all the bears in the area to the high country months ago – and also we see some of the stupidty of the administrative ranks. The rangers work on the situation, demanding that campers move out of the vicinity…and of course, a few stubborn ones ignore the order, to their gory regret.
With the help of a “hot-shot naturalist temporarily assigned to the park” named Arthur Scott, it’s soon determined that the attacking bear is actually a grizzly. Arthur Scott vies with Kelly Gordon as the star of the show; he’s a rugged individualist type himself, but one who likes to dress up in animal hides and lurk in nature for days, observing animals in the wild. In fact, there’s a bit of a Predator foreshadowing here when Arthur decides to buck the other rangers and go out after the giant grizzly on his own. Unfortunately for him he isn’t Arnold Schwarzenegger, so it doesn’t go very well. This stuff was cool, though, and I liked it that Arthur was the only character who really took the fight to the bear, going out in the element of “The Beast” cloaked in animal skins and armed with an experimental dart gun.
It wouldn’t be ‘70s eco-horror without a bit of random casual sex, though, and Corley also delivers on this – though as stated all the sex is off-page. Kelly and Allison find the time to get it on in a remote cabin in the woods, in the midst of the grizzly’s carnage. This part is enjoyably ‘70s with them mixing drinks and shooting the pre-sex breeze while the other rangers are out in the dark woods waiting in ambush for a massive bear that’s chewing up random victims. However it’s also very ‘70s in that Allison has no bearings on the plot; she takes some photos of the carnage (and vomits), but eventually heeds Kelly’s advice that she get the hell out of the park until the bear is found. So in other words we don’t have any of the mandatory “female empowerment” of today with rugged female characters also taking on the bear; even the curvy ranger babe, Gail Nelson, doesn’t amount to much in the narrative, other than the aforementioned scene where she strips down by a waterfall, deciding to take this moment to finally give the goods to a hunky fellow ranger. You don’t have to be a horror veteran to guess how this scene plays out.
The book also doesn’t shirk on the grizzly carnage; there are frequent attacks on hapless campers, both in the woods and in civilization. The latter plays out in a sequence more akin to a supernatural thriller, with the grizzly attacking homes and a restaurant – one that happens to be owned by Allison’s dad, and is also one of the reasons why she decides to leave until the bear is taken down. But speaking of which that’s one element in which Snowman was superior…but then, that novel featured guys with frigin’ nuclear crossbows going after the titular monster. Here, we just have Kelly piloting a helicopter while one of his colleagues takes aim with a big gun. It’s cool and all, but nowhere in the crazed realms of the other novel.
All told, Grizzly was a quick and fun read, with that “full ‘70s flavor” I demand in my fiction. (Can’t recall where I read that phrase, but I love it.) It was so good that in my mind Grizzly will just be a novel, and I see no reason to seek out the film someday. Well, I did read that the actress who plays the curvy rangerette was a Penthouse model, so maybe there is a reason.
Posted by Joe Kenney at 6:30 AM

not sure about the book...but in the movie the bear actually takes down a helicopter! And decapitates a horse! The Penthouse model was Victoria Johnson.

I saw it for the first time last night. I thought it would be a mess, but it's very solid. It's a conservationist film, not an ecototalitarian. There is some bizarre humor at the beginning, with the bear gasping at the women (almost a metaphor for masculinity in danger of extinction). Then the bear diversifies its victims. The film reaches its peak when he kills a child and his mother, a great scene. From when the cinema still stylized things, even terror.

Thanks for the comments! Toad, both those incidents also occur in the novel. And Johny, thanks for the writeup on the movie!