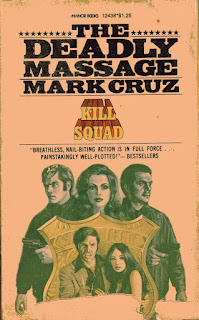 The Deadly Massage, by Mark Cruz
No month stated, 1976  Manor Books
The Kill Squad series comes to a close with an installment that promises a lot more sleaze than it ultimately delivers; save for the narrative tone Dan Streib (aka “Mark Cruz”) writes the book in. While Streib is fond of very crude analogies and metaphors in the narrative, the book per se is pretty anemic in the sleaze department, even if it concerns the titular Kill Squad investigating the linkup between a Chinese massage parlor and the slave trade.
First of all, this is another book I got from Marty McKee some years ago; in fact I’m reading the same copy he reviewed on his blog in 2013. It’s interesting to see a Manor men’s adventure novel from 1976, given that the majority of publishers were whittling way back on their men’s adventure series at the time. I agree with Marty that Streib goofs by once again taking the Kill Squad out of its California stomping grounds and putting it in a foreign country, which is what he’s done for the past few volumes. The entire premise is ludicrous and gives the impression that Streib didn’t know how to properly handle the series. I mean “trio of tough cops killing crooks” seems like a series that could write itself, but instead Streib’s been running on empty ever since the entertaining first volume.
But then, book producer Lyle Kenyon Engel himself referred to Dan Streib as “not very good,” no doubt a veiled reference to Streib’s work on the first two volumes of Chopper Cop. As I mentioned in my reviews of those books, Streib delivered an “action hero” who was more of a wuss. And as I’ve mentioned in my Kill Squad reviews, it’s as if Streib had a delayed realization of this and doubled down on making the hero of this series an uber-macho badass…to the extent that main series protagonist Chet Tabor comes off like a hateful prick. Definitely one of the more unlikable heroes in men’s adventure…with the added kick in the crotch that Tabor’s also a screw-up, even though he himself of course doesn’t realize it.
But the macho drive extends to the narrative tone. In fact one could almost argue that Streib is spoofing the entire vibe of the genre. This is evident in the crudity of the narrative, particularly in such weird word-painting as, “…the [Hong Kong airport] runway extend[ed] like a stiff penis,” or “Malaysia…hung like a penis from the underbelly of Asia.” We learn that Tabor’s old Mercedes has now grown “cranky…like a woman in menopause,” and also that he sometimes takes superior-officer/fellow Kill Squader Maria Alvarez to bed because “she needed that occasionally, so she didn’t forget that she was a woman.” Oh and for the first time, I believe, Streib mentions Maria’s grim ordeal in the first volume: “…a gang rape that had left her nauseated for months when she even thought about sex.” Even the first page is indicative of this uber-macho, almost-parodic tone: 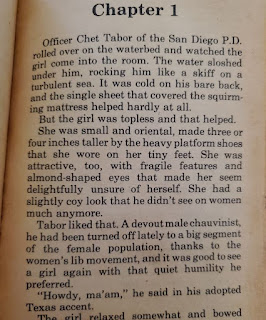 When we meet them Tabor and Grant Lincoln, the other member of the Kill Squad (aka “the black one”), are moonlighting on the “keyhole-peeking Vice squad,” pretending to be businessmen at the China Doll massage parlor in San Diego, Kill Squad home base. Here’s where Tabor’s dumb-assness comes in; so his and Grant’s task is to get these hookers to proposition them, but Tabor soon discovers his girl doesn’t speak English. So Tabor decides to take his girl – and the two Grant has grabbed for himself (just like Jim Kelly!) – and take them out to dinner!? Right then and there! So he pulls them out of the parlor and some toughs give chase, and in the ensuing shootout one of the girls is killed and the China Doll burns down.
So clearly this entire plot would be unbelievable even in an ‘80s buddy cop film. Speaking of which, the plot of Deadly Massage is sort of reminiscent of an actual ‘80s action movie: The Protector. But the setup is even more implausible here. Essentlially Tabor, Grant, and Maria bully their “stupid chief” into letting them go to Hong Kong(!) to track down the two massage parlor girls, both of whom were abducted during the shootout and likely have been smuggled back to “the Orient.” The idea is that these two girls could blow the lid off an entire slave-trade operation running out of Red China. Streib even unwittingly brings in some identity politics presience; when the stupid chief denies the entire idea, a fellow cop – who happens to be Asian – shames the chief that he doesn’t care about the girls: “Is it because they’re Chinese?”
So reality be damned the Kill Squad heads over to Hong Kong. It even gets more ludicrous because the local cops allow them to keep their guns. Some detail is given Tabor’s two new guns: a Webley revolver and a Beretta .380. He might’ve used these in the previous books, I can’t remember, but Streib introduces them like they’re new to Tabor’s arsenal. Not that he will use them much; there are only a few shootouts in The Deadly Massage, and nothing too violent…except when it comes to Streib’s trademark description of a woman being shot in the face. This is a recurring theme in Streib’s novels, complete with the weird constant detail of the cheekbones also exploding: 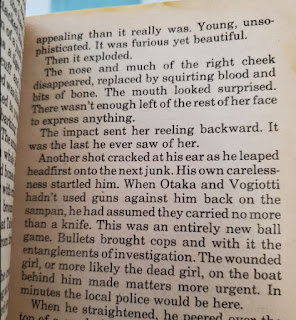 But here’s the crazy thing about a novel involving massage parlors and sex-slavery: there isn’t a sex scene in The Deadly Massage! Tabor often thinks about banging Maria – and later in the book we learn Maria gets all hot and bothered by Tabor, too, even though she hates his male chauvinist pig guts. Nothing ever happens, though, however we do learn that Tabor briefly considers becoming a Muslim because he learns that Muslims can have several wives! This is courtesy a local named Low who happens to be “Muslin” [sp] who has four wives, and Tabor can’t get over how hot each of them are. Tabor briefly considers becoming a Muslim to take advantage of this, “before they change the rules.” Indeed Tabor’s male-gazery is so over the top throughout the book that it’s a refreshing balm to the emasculating bullshit of today’s action entertainment.
Oh, but there’s a dark side, though: Tabor again indulges in his penchant for random racism. This, as ever, is directed toward Grant Lincoln, who curiously receives hardly any narrative space in The Deadly Massage. Tabor is as ever the star of the show, with occasional cutovers to Maria’s perspective. But Grant Lincoln doesn’t get to do much…other, that is, receive some nonsensical baiting from Tabor: “You black bastard! What’s wrong with you, boy?” Oh and we also have the “Jap killer” the Kill Squad chases to Hong Kong – meaning he’s a killer who happens to be Japanese, not a killer of Japanese.
Streib also works in a half-assed mystery subplot on who exactly is behind the slavery ring, even though it will soon be clear to even the most unengaged reader…though of course the members of the Kill Squad take forever to figure this out. They do a fair bit of traveling around “the Orient” as well, from Hong Kong to Malaysia to Bangkok. The action climaxes in a snake temple, but as Marty notes in his review Streib does precious little to bring the scene to life. Marty’s also on-point with how a major villain is killed off-page, which also sucks. But by novel’s end the Kill Squad has cracked the case and is happily heading back to San Diego – where presumably the three of them will continue acting as a team.
So in other words, there’s no real finale to the series here, no indication that this was the final volume. One can’t be too upset that there were no more volumes of Kill Squad, though, as Dan Streib never really figured out how to handle the concept. Which is curious, because he did a better job on the similar Death Squad series. But on a random note I found it interesting that Streib used the term “sci-fi” in The Deadly Massage, in reference to “the sci-fi sound of Hong Kong police sirens.” This might be one of the earliest appearances of this term I’ve seen in a mainstream novel…well, not that Kill Squad was mainstream. But you know what I mean.
Finally, I’m calling bullshit on the cover blurb by “Bestsellers.” There hasn’t been a single damn volume of Kill Squad that’s been “painstakingly well-plotted,” so either the entire review is fake (the most likely scenario) or it’s been lifted from the review of an entirely different book.
Posted by Joe Kenney at 6:30 AM

You should explore the vice squad" subgenre. I've been looking at old books, like the ones by Michael Carey, they seem interesting.