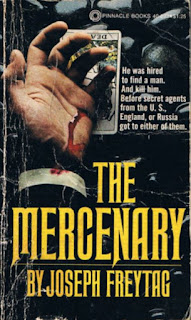 The Mercenary sounds a lot like the manga/anime character Golgo 13 who is a professional assassin who takes jobs from the highest bidder. He works for both sides of the Cold War (and for the Mafia or anyone else who can pay.) Before each hit he routinely has sex with a beautiful women. A lot of the stories have a grindhouse vibe, though others read like something Frederick Forsyte or Tom Clancy might write.

Got a copy at home of this book. Haven't read yet.