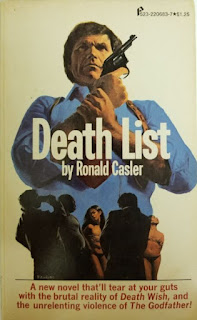 This one is similar to Gannon and Stryker in that the publisher tries to warn away potential readers with yet more hyperbolic copy on the back, as if this were the print equivalent of a pack of cigarettes: 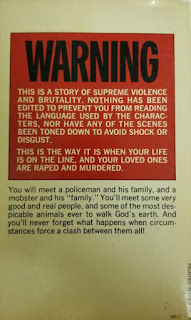 And yes, Death List certainly pushes the sleaze and exploitation buttons. I mean good grief, if you are a female character in this novel, you’re going to be tied up, stripped, raped, beaten, and more than likely killed. Yep, it’s that kind of book, folks, one that makes you want to take a shower after you read it. And yet for all that it’s never too salacious with the lurid details, mostly because the book is for the most part written in a humdrum, no-frills style that would be more at home at Leisure Books.

But what really interests me is that Death List appears to be the opening volume of a series that never was. Not that this is stated anywhere; it’s packaged as a standalone thriller, with cover callouts to Death Wish and The Godfather. But upon reading the novel you discover that it builds and builds toward something – only for it to not happen, with the clear indication that a followup volume would continue the tale. Unfortunately, nothing else was published by Ronald Casler. And speaking of whom, the book is copyright Casler, but that doesn’t really mean anything – “Ronald Casler” could in fact have just been the intended house name that would be used for this series.

Anyway this is one grimy novel, and as mentioned seems more like something Leisure or Manor would’ve published. It occurs in a snow-swept New York City, and our hero of sorts is tough cop Mike McGraw, a 40-something police officer who was a “one-man army” in Korea and who now carries around a .45 pistol with dum-dum bullets (he even carves the crosses on the tips himself). For the past twenty-odd years he’s been married to the lovely Suki, a Japanese nurse he picked up while in the hospital recuperating from some wounds he suffered in combat. They have a daughter in her 20s named Cathy, just as pretty as her mom, and a son named Rick who doesn’t show up – and in fact I don’t even think is mentioned – until the very end of the book.

The novel opens on the exploitation – a young Mafioso named Nick Torrio has kidnapped his former girlfriend, Rita, and is keeping her prisoner in a safe house. As we meet the lovely couple, Rita is nude and tied up, having been raped and abused repeatedly by Nick, who enjoys forcing her to play Rusisan Roulette, putting out lit cigarettes on her breasts and stomach, telling her he’s going to slice her up, and then dumping vodka on her and taunting her with a lit match. Nick we learn is the son of old Don Torrio, and he’s gone nuts – Rita was about to turn Nick in, or something, and Nick broke her out of protective custody, gunning down the four cops who were watching her, and has stolen her away to torture her before killing her.

Also Nick stole half a million dollars from his old man, along with some heroin; this is why Nick only has one person still in his corner: Lou Gruber, a hitman who himself was once involved with poor Rita. He’s sort of against this whole thing, but sticks around because Nick has the heroin he’s addicted to. But when Lou goes out on a pizza run(!), hero cop Mike McGraw spots him – and instead of calling in backup, whips out his .45 and follows him. If there’s a moral to Death List, unintentional or not, it’s that if you’re a cop you should always call for backup.

In the shootout, Mike blows apart Lou’s shoulder with one of those dum-dums, but Mike himself is knocked out by a bullet that creases his head. Meanwhile Rita gets hold of his .45 and deals some bloody payback, with a point-blank shot to Nick’s face that leaves blood and brains all over the place. (Her parting comments before blowing off his head: “My tits and my belly are going to look ugly, and I’ll have to put the lights out when I get into bed with a guy or he’ll puke.”) Rita escapes with the $450k and the heroin, and a dying Lou Gruber lies to the cops that Mike killed Nick Torrio and that Rita was already dead and was never even at the house.

This is what sets off the novel’s events: Don Torrio wants back his money and his heroin, and tasks his equally-sadistic son Tony with getting it back. Tony is certain Mike has stolen the money himself and thus calls in his chief enforcer, Jerry Evans, a muscle-bound nutjob with long blond hair, to root out the truth. Jerry proves to be the main villain of the novel as he’s been given free reign to get the job done – and he does some horrible shit. Rounding up a few fellow thugs, first Jerry abducts Cathy and her equally-pretty friend, Ellen, who conveniently enough has just dropped by to visit. Then he rounds up Mike and Suki and abducts them as well.

The majority of the novel takes place in a desolate farm house in New Jersey, one that’s been used for past Mafia rubouts. The women are promptly chained to a ceiling pipe in the cellar, and Mike, who for a “one-man army” doesn’t do very well for himself, bluffs that he really did take the money and the heroin and he’ll show the thugs where it is. It’s just a time-stalling gambit. Two thugs take him off in a truck while Jerry and his fellow thug “go all the way with all the women.”

It’s grimy and unsettling but mostly relayed via dialog as “the animals” rape the three women (“This cop sure has himself a nice piece,” and etc). But then Rita comes back into the tale – having hid out in a Times Square hotel, she’s gotten some guy to give her a lift to California. But the dude and his pal plan to roll her instead (seriously, every single woman in the novel is preyed upon). Instead the three are arrested when the heroin is uncovered during the attempted rolling. Now the news is out that Rita’s been alive all along, and Tony Torrio, running the family given that his despondent father is bedridden, realizes his thugs went too far indeed.

Meanwhile Mike’s being driven through the Jersey wilds, and the reader expects him to pull some of that “one-man army” stuff and free himself. Instead he just sits there despondently and admits, when the news come through that Rita is actually alive, that he was just bluffing! Finally he turns the tables on his abductors, grilling them for the location of the farmhouse and calling in his partner with the info. At this point he has no idea that his wife, daughter, and Ellen have been raped – nor that Tony Torrio has given the order that they’re all to be killed, to wipe out any witnesses.

We’re headed for a dark climax, thus Mike’s brief shootout with some of the thugs doesn’t have the dramatic thrust one would want. Wielding dual .38s, Mike blasts away a couple of them and gets in an extended shootout with Jerry, before discovering the corpse of his wife and his gutshot daughter – who, right on cue, dies in her father’s arms. There’s like ten pages left in the book at this point, and the reader begins to suspect something is amiss. Mike, who in each of his action scenes stumbles or falls or gets knocked out, nearly dies in the housefire Jerry starts in his escape, and is only saved by his partner.

With strength born of desperation and hate, Mike charged the rest of the way up the stairs. Jerry jerked the shotgun away from Ellen and kneed her in the stomach. He saw Mike coming and just had time to swing the rifle butt as Mike got to him. The butt of the rifle glanced off Mike’s head and stunned him enough to make him lose his balance. As he fell backward, the gun in his hand went off, and the bullet hit Jerry in the right shoulder, making him drop the shotgun, which fell down the stairs after Mike, who landed in a heap at the bottom of the stairs.

Speaking of Jerry, for a sadistic lunatic the dude is like the Duracell Bunny – nothing stops him! After escaping with Ellen as a hostage (whom he later strangles – yep, every single woman is killed!), Jerry himself is almost killed, by thugs Tony has sent to rub him out for the wanton mess he’s made of this job. But Tony manages to kill his would-be killers and makes off with his girlfriend, even phoning Tony to vow revenge. Meanwhile Mike is in the hospital, practically insane with grief; whether through intention or design, his muddled thoughts call to mind those of old Don Torrio’s, earlier in the book. But anway our hero is now basically a vegetable.

Here’s where things get head-shakingly goofy – and where one wonders what the hell was going on behind the scenes at Pinnacle. On page 167 (of a 180-page novel with big print!), Rick McGraw, Mike’s strapping young son, returns home. He visits his mind-addled dad in the hospital and then demands Mike’s partner to put together “a list – a death list” of all the people who were involved in this fiasco, from Tony Torrio (on whom the cops have nothing) on down to Jerry Evans (who has disappeared without a trace). Rick will be using this list to exact his revenge.

And folks….here the novel ends!! That’s it! Absolutely nothing is wrapped up and no vengeance is sown. I mean the titular “death list” isn’t even mentioned until page 175! And apparently Rick McGraw is intended to be the real hero of the yarn, as it is he who will be getting the vengeance! So either Ronald Casler was a very, very bad plotter, or this was indeed planned as the start of a Death Wish cash-in series, like Pinnacle’s answer to Bronson, or a prefigure of the much-superior Vigilante, featuring Rick McGraw reaping bloody revenge.

Who knows, really. Long story short, I wanted a lurid crime novel from the ‘70s, and that’s what I got – grimy and sleazy and unpleasant, but somehow admirable for those very reasons. If the writing were a little stronger and, you know, some actual revenge was dished out, “Ronald Casler” might’ve had a grindhouse-esque classic on his hands.
Posted by Joe Kenney at 6:30 AM