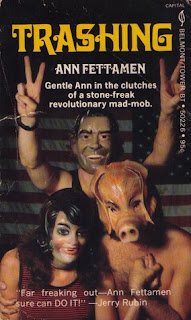 Sounds like a plot concocted by degenerates who live in a drug-addled fantasy world, and use culture to propagandize and radicalize the larger society. Unfortunately, many people like this now run our media and culture (only they wear suits now, have fat bank accounts, promote neoliberal globalism and transgenderism for kids), still peddling fantasies about "neo-Nazis", "Russians", "Christian theocrats", etc. and hope the working class won't catch on to what disgusting frauds these "revolutionaries" always were. Why do you read such trash?

Thanks for the comments! Treebeard, love your note, but you forgot to include schools! They run those, too. While I agree with you, at this point I'm thinking if you can't beat 'em, join 'em. Personally I look forward to not being accountable for anything, so long as I align with the current racial-liberal-transwhatever talking points. We can discuss this more over some legalized psychedelic mushrooms in Oregon -- be sure to bring your piss-balloons for a little "peaceful protesting" afterward!