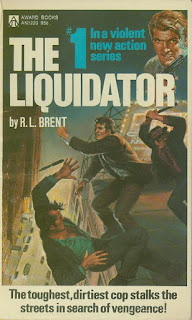 Did anyone write novels from the perspective of the mafia, instead of these endless "war on the mafia" vigilantes? Something like the "Parker" novels, if Parker worked for the mob. That would be an interesting series.

Of course. There's one called the Trigger Man by Richard Posner. Is a Fawcett publication. There's a lot of them but with misleading package.

Thanks for the comments! Treebeard, off the top of my head there's Adrano For Hire, which is about a young Mafia punk climbing up the ladder. I seem to recall it has a definite Parker influence at times.

Film Buff, thanks also for the note -- and I happened to review The Trigger Man a few years ago!

I couldn't help hoping this review was of that other series called "The Liquidator," the one that inspired the very tongue-in-cheek Rod Taylor film.
I've only read the first one in that series, but it's good.

Interesting! I have not read that series but I know the cover art was done by Samson Pollen, who did hundreds of men's adventure magazine illustrations and paperback covers, many of which are featured in the books POLLEN'S WOMEN and POLLEN'S ACTION. I'd love to get high resolution scans of the LIQUIDATOR covers from you, Joe, for a future book. (Meaning 300dpi scans, if possible, or high rez photos.) Is that doable?

Hi Bob, sorry I neglected to respond to you. I thought I had! I actually don't have access to a scanner -- I lifted the cover image above off the internet years ago, and don't even remember where I got it. Might've been from Bill Crider's review of many years ago. Sorry -- and sorry for the delay in response!

No prob. Thanks, Joe.