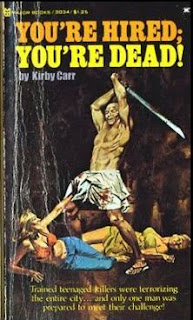 The final volume of Hitman* takes the series in a sleazier direction – even when compared to previous installments – but be aware it’s not “fun” sleaze, but sleaze of an off-putting nature. For in this one Mike “Hitman” Ross goes up against brainwashed teenaged girls, and Kin Platt (aka Kirby Carr) takes a sick delight in exploiting them throughout, particularly those younger than 16, with even a few random hardcore sex scenes featuring a 14 year-old.

In many ways You’re Hired; You’re Dead! is a lazy rewrite of the previous volume, which featured the exact same plot – a bitter woman sending out young female assassins to do her bidding. But this is just one sign that Platt has grown bored of the series; much of the book is comprised of page-filling of the most egregious nature, with Ross most times just standing around and wondering what to do…before a plot contrivance stumbles along to point him in the right direction. Otherwise we get lots and lots of digressive material on one-off characters; even Ross’s action scenes are sorely compromised, amounting to two such sequences, both of which are blatant rehashes of the ones in the previous volume.

The opening even demonstrates an author winging it as he goes along; Ross wakes up in his own bed to find a hot young girl beside him, nude and ready to go…he has no idea who she is or what’s going on. Then she reveals a knife and goes for the kill, and Ross, being the Hitman and all, kills her with her own knife, later regretting that he didn’t keep her alive to question her. Only belatedly does he realize he hired her as a maid the other day and she just spent the night in his home as part of an “overnight contract.”

However, Platt tries to cover himself when Ross admits he had a few drinks the night before, thus his temporary confusion in the opening pages – whether intentional or not, another parallel to the Spider pulps is the implication that the nutcase “hero” of this series is in fact drunk most of the time. Before death the girl blabbed something about “Murder Maids.” We soon learn there’s been a rash of murders around Los Angeles, the killers all young blondes posing as maids and babysitters (in one cruel sequence we learn a 5 year-old had his throat slashed), all of them hired via classified ads. When recurring character Lt. Wilson of the LAPD tries to investigate, he finds all the ad postings were one-time deals and can’t be traced, or somesuch. So he calls in Mike Ross, the Hitman.

We readers know the culprit is Martha Hamilton, a hotstuff older blonde with an axe to grind on male society; her backstory is even a retread of the female villain’s in the previous book, with men treating her woefully since childhood. Now she’s got this army of young girls, all picked up off the street and promptly brainwashed by hunchbacked genius Dr. Shult, who has developed a device that controls minds. He even gets his own digressive backstory which shows how he ended up working for Martha, who as a millionaire thanks to her dead criminal husband could give Shult all the money he wanted for his invention. A vague backstory also has it that Ross killed Martha’s husband or something, hence one of the girls being sent to kill him.

As mentioned the girls are all young, 18 at the most, but Platt focuses mostly on the young ones. It’s my understanding Platt made a name for himself, such as it was, as an author of juvenile fiction in the ‘70s. If so then he must’ve been having some sick fun with this series, because it’s like the sleazeball alternate reality version of juvenile fiction – grimy, outrageous exploitation of preteen girls, up to and including their deaths. The cover painting actually depicts a scene in the book, sort of, because folks the guy with the sword turns out to be Master Lo, Ross’s 80 year-old martial arts teacher, and he’s taking care of a pair of brainwashed teen girl assassins by chopping their heads off.

There’s lots of shit about the various assassin girls going about their chores, including another one sent after Ross. This one he successfully stops by re-hypnotizing her, figuring he can trail her back to wherever she came from, but a timed explosive in her car finishes her off. Around this point Ross gets in one of the few real action scenes in the novel, as a squad of killers who work for mobster Joey Massina descend on Ross’s nigh-impregnable mountaintop home. Joey was hired by Martha to round up a bunch of guys to kill Ross…yes, exactly as in the previous book.

And it goes down the same, though this time Ross is alerted to his visitors by an anonymous call, which turns out to be from Dr. Shult – he’s worried Martha will send her killer girls after him one day, too, so figures he should keep Ross alive for protection. But once again Ross is nearly superhuman; he takes care of the invaders as easily as the average guy might stomp on a cockroach. A later scene has him decked out in his Hitman gear – black nylon combat suit and cowl with eye-slits – and launching a raid on Joey’s place. Here he kills over a dozen guys without batting an eye. The action scenes lack any thrilling content but are at least slightly gory, if less so than previous books. Platt does look forward to the men’s adventure of the ‘80s with occasional gun-porn, like a digressive rundown on the armament in Ross’s “Chevyvan war wagon.”

Platt, apparently realizing he blew a good chance to fill pages with the abrupt car-bomb murder of the previous brainwashed gal, introduces another one in the latter half of the book, this one a 14 year-old hooker named Alice who also poses as Laurie and Lori. She too comes to kill Ross, showing off her body in a failed attempt to screw him – Ross goes without sex this volume – and our hero successfully deprograms her. He even offers her a job. Alice leaves to “think about it” and ends up being picked up by Martha – the series has always existed in its own little universe, populated by just a handful of people – who, brace yourself folks, promptly seduces Alice right there in the car, in outrageous XXX detail. Alice, who royally gets off on it, declares Martha a supreme “muff-diver.”

As if that weren’t enough, Martha sends Alice over to Shult’s as the latest candidate for brainwashing…and now it’s the good doctor’s turn to boff the preteen girl in outrageous XXX detail. But Alice sort of falls in love with Shult, mostly due to his massive wang, and in the homestretch the plot turns into Shult planning to use Alice against Martha. Meanwhile a squad of girls have been sent to Ross’s home, making for the third time he’s been visited by brainwashed preteen killers. Here Platt goes through the roof with the off-putting sleaze, because the girls go into a sexual frenzy, tearing off their own clothes and Ross’s as they attack him en masse – complete with explicit detail of the parts of their bodies being jammed in Ross’s face as he struggles against them. He’s saved by the appearance of Lt. Wilson, who just laughs and wonders if Ross took the opportunity to fuck any of them first, because that’s what he would’ve done!

Since the book’s so scarce and obscure (likely because Major didn’t want to waste much money on printing this crap), I’ll spoil the finale…it’s dumb. In a complete disregard for any sort of reality, even “reality” as it exists in this bizarre, pulpy series, Platt has Master Lo basically “sniffing” the aether and, like a human hound dog, tracking down the hiding place of the villain who has been sending out these killer girls. And folks he just walks right up to Martha’s door and hacks her head off. He later does the same to Shult. Meanwhile Ross is still busy struggling with those nude teen girls. When Ross, Lt. Wilson, and Lo meet up at the end, they all have a good chuckle over how Lo took care of everything for them!

This was easily my least favorite book in the series, though the only one I really liked was the first volume. It would seem apparent that Kin Platt quickly grew bored of the series, and by this last volume he was completely checked out. But then, Major Books was, too – note that the cover does not state “Hitman” anywhere, nor is there a volume number presented. For that matter, neither Ross nor “Hitman” are even mentioned on the back cover copy. Now that I think of it, this has been true since the first volume Major published, You Die Next, Jill Baby!  So maybe Major quickly churned out these three final volumes so as to be done with it.

*As mentioned in previous reviews, the 1975 Major paperback The Impossibe Spy, also credited to Kirby Carr, is often listed as the eighth and final volume of Hitman. I dutifully picked up the book several years ago…only to discover it’s a standalone novel, not connected to the series. Thus You’re Hired; You’re Dead! is actually the final volume of Hitman.
Posted by Joe Kenney at 6:30 AM


Platt was always a shitty, sadistic writer, who was given Way too many contracts in the '70s, at least. Such YA anti-classics as HEY, DUMMY were the nadir of the form in those years.

Hey Todd, thanks for the note on Platt. "Shitty" and "sadistic" perfectly sums up his work on Hitman...hard to believe his YA material was of the same token. I guess it's another one we can file under "Only in the '70s..."