The Inquisitor #6: Last Rites For The Vulture 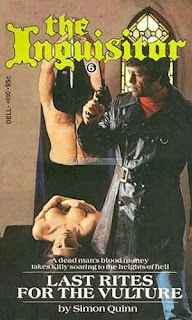 The Inquisitor #6: Last Rites For The Vulture, by Simon Quinn
May, 1975  Dell Books

Well, I liked this sixth and final volume of The Inquisitor slightly more than the the third volume. Apologies to fans of this series, but I have to conclude that I just don’t dig it. It’s not the fault of Martin “Simon Quinn” Cruz Smith, as he delivers exactly what the label on the spine promises – a “Mystery” novel. That’s all this series is, even though it was packaged and sold (and thus tagged here on the blog) as men’s adventure.

Despite the salacious copy on the first page preview and the back cover, there’s nothing in Last Rites For The Vulture that would be out of place in a TV movie of the era. If anything this one’s even slower-paced than Nuplex Red, and throughout Smith is content to dwell on scene-setting and dialog. As for the elements expected of the genre – sex and violence – he is not concerned with them at all. In many ways this series is similar to another slow-burn “men’s adventure series,” Dakota, though thankfully not as sleep-inducing. (But then how could it be?)

The novel opens with a nicely-written but ultimately digressive scene in which a young pair of backpacking tourists in Spello, a village in Umbria, Italy, turn out to be traveling assassins. They use a contraption of their own invention to spray a poison in the face of an 80-year old monk – a monk who, strangely enough, seems quite able of handling himself against two opponents. But they spray him regardless and he dies of a heart attack, one that will seem to be natural in the ensuing autopsy. When series protagonist Francis Xavier Killy enters the fray, it’s weeks later and he’s here with his boss Cella, both of them come to Spello to see if the murdered monk, Brother Pietro, is worthy of sainthood. If you’re looking for a peek into the machinations of the Chuch, then this is the series for you.

If you’re looking for action and sex, it’s not. It’s very much in the mystery mold as Killy, posing as a priest, investigates Spello and Pietro’s past at the behest of Cella. Smith excels in the description of Spello, bringing to life its hardscrabble peasants and shifty town leaders who yearn for Brother Pietro’s sainthood. Though, in a nice moment that undercuts the sap, Cello eventually reveals that Spello is dying while a nearby city is thriving, and why? Because that other city has its own saint. It seems that having a town saint is a tremendous boost for tourism.

Meanwhile Killy has discovered that Brother Pietro’s heart attack might not’ve been as natural as believed. Here Cella also reveals another big tidbit – that Pietro was at one time known as “The Vulture,” and he was an ally of Al Capone who ran whores and whatnot. He was extradited from the US shortly before WWII, going on to live in wealth in Italy. Then the Nazis rounded him up, he escaped, freeing the prisoners with him, and eventually went into hiding as a monk in Spello. But he took to this simple life and stayed that way until his murder, his vast resources funnelled into a Mexican banking firm called Condor. Now the question is, who killed him and why?

Killy next heads for Baja California, and we’re treated to a practically endless hang gliding race in which one of Killy’s opponents, unbeknownst to him but made clear to us readers, is one of Pietro’s assassins. From here Killy, posing as a gadabout sportsman, ingratiates himself into the jet-setting fold of Roberto, Allan, and Alexandra Ciccio. The former two are the assassins, we readers know, but their dayjob entails running the Condor bank. Alexandra is the hot-to-trot granddaughter of Brother Pietro – a carefree babe who tears her jeep across the Baja desert while smoking grass.

Alexandra provides most of the thrills in the novel, not to mention the little salacious content. She is of course horny for our hero, and the two exchange barbed dialog before the inevitable screwing. For it must be said that Smith shines in the dialog department, particularly Killy’s deadpan lines. Alexandra’s most notable sequence displays her rock star lifestyle; after some hard drinking and dopesmoking she insists on driving Killy back to her place in her new sportscar, but instead she intentionally flies off a pier and lands the car in the ocean. It’s submerged to the doorhandles and sharks swirl outside, and she and Killy are trapped in here until the tide goes out, taking the sharks with it. Smith as expected leaves the ensuing sex off-page.

But it does just go on and on…Killy hanging with Roberto and Allan, who have proclaimed him their new best bud, while Killy suspects the pair might be involved in something nefarious. Meanwhile he’s here to keep an eye on Alexandra…it turns out that the assets of Condor are being used in a land-buying scheme in the desert near San Luca or somesuch. Later on Killy flies to Tokyo for a few pages and then to Montreal for a few pages more, each time coming upon a businessman who has just been murdered; more to do with this property scheme.

It’s not until the final quarter that the novel really kicks into gear – and mind you, Killy hasn’t gotten in a single gunfight or killed anyone yet. The most he’s done is get in a brawl with a drunk rival of Condor during a yacht party. But at this point Roberto and Allan are forced to finally show their hand, and meanwhile Killy’s deduced why they’ve been treating him like their BFF; they intend to kill Alexandra, the last obstacle in their gaining all of Condor’s assets, and make it look like Killy did it. And of course they’ll kill him, too; the goal will be to make it look like an accident.

This leads to another nice sequence with Alexandra, with her and Killy stranded on a cove that’s used for sea turtle burial; the place is surrounded by a barbed wire fence and a faroff sniper prevents Killy from scaling over it with a towel. Instead they put those turtle shells to use and dig their way out. Throughout Killy keeps Alexandra from realizing the life-or-death situation they’re in, trading more of that deadpan dialog with her. Some of it is pretty funny, like Killy’s “Talk about problems” when Alexandra notes that his shoulder is bleeding from a .22 bullet.

The finale slightly ramps up the tension. Killy and Alexandra escape Florita via a sailplane – Smith seems to have had a major interest in hang gliders, sailplanes, and vintage light planes when he wrote this one, because it seems that a good portion of the narrative is given over to Killy flying various small aircraft. But they’re chased by Roberto and Allan in their old Vampire plane and they crash in the desert. Killy’s again hurt, getting a concussion, and they hole up in an old mission for a few days, slowly dying of thirst and hunger.

But they’re able to escape again, and we get another long aerial chase, as if the previous one was just a bit of page-filling to meet the word count. And folks, at least in Nuplex Red Killy lived up to his name and killed someone. I mean I don’t expect much from my men’s adventure protagonists, but I at least expect that! But again, take a look at that label on the spine…we’re reading a Mystery novel. Mother nature ends up doing Killy’s work for him. He leads the Vampire into a lightning storm, and while Killy’s sailplane has no issues, flying into a storm in a light plane like the Vampire is “like jumping off a cliff.” Smith even teases us that Killy might shoot someoneone, earlier on; he takes a revolver from some dirty Florita cops he knocks out, but ultimately the gun’s just used to kill a few snakes.

However it must be stressed that this lack of exploitative content doesn’t mean Last Rites For The Vulture is bad…it’s just very safe and mainstream ready. It packs in just a few memorable moments of weirdness, but never goes too far with them. Killy comes off like a paperback James Gardner with his glib dialog and self-deprecating manner, and he lacks the merciless nature of the average men’s adventure protagonist of the ‘70s. In fact it’s surprising this series hasn’t been republished or epublished with appropriately bland, photoshopped covers, as with the recent bowdlerized Specialist ebooks. There’s nothing here Smith should be ashamed of, and it’s safe enough for grandmothers to read.

While the writing is fine, the depth of characterization above the genre norm, and the snappy dialog certainly beyond anything else in the genre, overall The Inquisitor just doesn’t do much for me, because it’s not what I want from the genre. It is, for the third and final time, really just a mystery series, more focused on sleuthing. But as for me personally I found a lot of it, like Nuplex Red, downright boring. So I doubt I’ll seek out any more of these books, which as mentioned previously are more expensive than they’re worth.
Posted by Joe Kenney at 6:30 AM

If you ever find a copy of the second one (The Last Time I Saw Hell) and can get it without compromising your kid's college fund, it's worth it. The pace was a touch off but the writing was top-notch and some of the hairy situations were so hairy that I can remember 'em in detail a couple years later, which isn't something you usually get from these series books. But, yeah, Nuplex Red was pretty bad. It had a pervasive feeling of nuclear doom, but I've seen more action scenes on C-SPAN. I have some of the others but haven't read them yet.