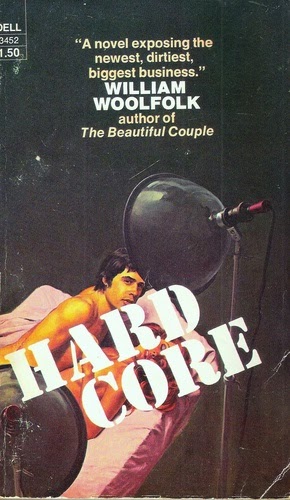 William Woolfolk was an author in the Burt Hirschfeld mold, and had his biggest hit with a novel titled The Beautiful Couple, a roman a clef about Elizabeth Taylor and Richard Burton. I haven’t read that one, but if the paperback-only Hard Core is any judge, Woolfolk is more in the “literary author” realm than you’d expect for someone in the trash fiction genre.

But Paul himself is a lame protagonist. One of the biggest problems with the novel, Paul is neither too goody-goody nor too depraved to be of much interest; what the novel really needed was a Harold Robbins-style protagonist. This is the same thing I complained about in my review of Norman Spinrad’s somewhat-similar (but much better) novel Passing Through The Flame. No, Paul is a sort of starch-collared square who goes through the novel judging everyone, ultimately building ill-will in the reader. I think the novel would’ve been better off without him.

Paul comes into the world of porn via unusual means: through the suicide of his soon-to-be mother-in-law. Leaving New York, where he has a job at a pretentious newspaper, Paul travels to Sweetzer, Ohio, to be with his naïve, virginal fiance Jennifer Naylor. Jennifer’s mother Helen is a professor at the local university, and all the academic snobs congregate at a party at her home the night Paul arrives. But something seems up with Helen Naylor, and next morning – after Paul has taken Jennifer’s virginity in a scene that goes more for poetry than sleaze – they find her dead in her bed. Later Paul will be informed she killed herself with strychnine.

Our reporter hero does his legwork and finds out that Helen was being blackmailed. Some idiot left her a threatening note about something he saw her in, and the idiot was dumb enough to leave his name on the note. Paul goes to the address, to find a shut-in freak who has stacks of boxes marked Confidential Cassettes. The freak gamely pops in the vidtape he wrote to Mrs. Naylor about, and it’s a sort of surveillance camera-style footage of women engaged in lesbian shenanigans. Helen Naylor is one of the participants; the shut-in has to point her out to Paul, who has watched the entire thing in sickened shock.

Rather than punch out the blackmailing shut-in who, you know, inadvertently caused the suicide of Helen, Paul instead vows vengeance against…Confidential Cassettes. I guess this is because his assumption is they’ve illegally filmed a “lesbian hangout” and released it, hence the surveillance footage aspect of the tape, but still. How much more interesting the novel would’ve been if Paul had just decided to research the company without the albatross of a vengeance subplot – a subplot which basically disappears.

Paul’s snobbish newspaper isn’t interested in the story; he’s recommended to take it to the more sensationalistic domain of William Graham Pritchett, an old newspaper magnate who’s so “William Randolph Hearst/Charles Foster Kane” that he even has his own Xanadu. The editor at one of Pritchett’s papers is interested in the story, and suggests that Paul even get a job at Confidential, so he can make double the buck – paid as an employee of Confidential Cassettes, and also paid for the series of article he’s secretly writing.

Confidential is set up like the old Hollywood studio system. It’s owned by yet another megamillionaire: Evan Hendershot, an epicurian with bisexual tendencies, but it’s run by a former football player named Tom Fallon, who serves as production chief. Fallon is gay for Hendershot, who merely toys with the man’s feelings, instead preferring to occasionally sleep with Confidential’s top star, brunette babe Sheila Tomkins. There’s also Max Rand, who acts as president, and a former adult paperback hack named Ed Ciranni who serves as the main writer for the company.

Paul’s able to bluff his way into a writing job, and they hook him up with Ed. The two come up with a series of films titled “The History of Pornography,” focusing on salacious moments from ancient literature. One problem with Hard Core is that the employees of Confidential Cassettes come off as a little too literary; each of them capable of sitting around and discussing Balzac or esoteric realms of ancient Roman literature. It’s a bit hard to buy, and comes off more as if Paul’s still hanging around with the snobbish academics back in Ohio.

The first episode of the History will focus on Phryne, the most famous courtesan of Ancient Greece, so a massive hunt goes on for the star. Evan Hendershot insists on Sheila Tomkins, who has been dubbed “the Queen of the vidcassettes,” as she has starred in so many of them and is the closest the industry has to a true star. One thing Woolfolk curiously leaves unstated is if Sheila actually has sex in her movies. Believe it or not, this little detail is never mentioned…but then, Woolfolk hardly ever bothers describing the actual movies that are filmed.

It’s true…only once or twice do we actually get to read about one of these Confidential Cassette releases, and in both cases they’re those “ secret surveillance camera”-type deals. The episodes of the History that we read about usually just feature nudity, like Sheila as Phryne disrobing before an audience, or a later film based on Bluebeard’s eight wives where she plays each of the wives, killed again and again – but sex is never mentioned. I started to wonder if by “porno” Woolfolk meant the early ‘70s Hollywood idea of it, ie lots of nudity but no actual onscreen sex, but then later he’d mention the hardcore shenanigans of those surveillance-type movies, so I was just plain confused.

Paul gets one gander at Sheila and goes head over heels. Another interesting tidbit about Woolfolk: he doesn’t really describe (and certainly doesn’t exploit) his female characters at all. We just learn that Sheila has dark hair and eyes and is very, very sexy. Rarely does Woolfolk describe anything else, other than the high fashion clothing she might wear. So as you can guess, when it comes to the very few sex scenes Woolfolk is indeed one of those authors who goes for the poetical approach, comparing climaxes to cresting waves and whatnot; again, more Burt Hirschfeld, less Irving A. Greenfield.

He might be bland, judgmental, and sort of forgettable, but Paul Gersbach is basically a cad; after taking young Jennifer’s virginity, he’s basically left her there in Ohio, telling her he has a story to finish back in NYC. Promptly be begins banging the hot chick who lives down the hall from his furnished apartment (again, zero details per the Woolfolk norm), and now he’s in lust with a “porno star.” Every once in a while Woolfolk will bring Jennifer back into the tale, and you feel bad for her, as she’s all alone now, her mother dead and all, her fiance Paul away in New York, and no one to be with her back in smalltown Ohio.

We get a lot of detail about the business of making adult vidcassettes. There’s a bit of a trash fiction vibe with the introduction of Evan Hendershot, who himself gest a case of the lusts – for Paul. Now Evan, who has a casual sex thing going with Sheila (she’s the only woman he’ll have sex with), tasks his favorite actress with wooing Paul, so Evan can swoop in and draft him on over to the world of the gays. Meanwhile Paul himself oblivously goes about the business of writing scripts for Confidential Cassettes, learning that his coworkers are all nuts.

Former Hollywood great Frank Murdoch gets the most print. Now a drunk, he falls further and further down the spiral, constantly butting heads with Tom Fallon, who treats Murdoch like dirt. Then Murdoch, who tells Paul that the world of porn is the world of no return, drinks himself to death, after which Fallon himself runs afoul of some mobsters and is beaten to a pulp before getting run over by a car. Likely realizing that an industry in which two colleagues die in the span of a week or two is not a safe industry to be in, Paul runs back to Ohio.

Again, it’s all about the business, less about the sleaze; Paul finds himself courted by both Confidential Cassettes and Hearst-esque Pritchett, who himself is looking to get into the adult vidcassette market. Both want Paul to be their head of production. Paul, his collar really starched at this point, says no – Frank Murdoch’s parting words have affected him. He goes about the business of planning to marry Jennifer, but he still lusts after Sheila. But when his articles for the Pritchett papers are scrapped and wily Max Rand screws over Paul’s chances of getting a teaching job at that Ohio college, back he goes to New York.

The Paul/Sheila deal plays out very strangely…sick of getting blue-balled, Paul takes advantage of her one night after she’s taken a valium! Here we get the most detailed (but still poetic) sex scene in the book, as Paul rapes the unconscious girl. Good grief! Now he’s really in love…but another curious tidbit is that, even though he and Sheila apparently begin dating, Woolfolk doesn’t bother telling us about it! We only learn in passing mention that Paul has been “spoiled” by sex with Sheila, who apparently treats him to some good and proper bangings. Oh, and Jennifer leaves him for someone else.

I mostly know Woolfolk from his long career writing comic books, including stories for DC Comics, Fawcett, Quality, and Timely. His one-time wife Dorothy Woolfolk was an editor at DC on the romance line. He also wrote for television.

That's interesting -- I didn't know Woolfolk (or his wife) had anything to do with comics. Sounds like Herbert Kastle. If you haven't checked it out already, Marty, let me recommend "Brain Boy Archives," a Dark Horse hardcover from the other year that collects the short-lived early 1960s comic book that was written by Kastle (credited as "Herb Castle") and drawn by Gil Kane. I read it last year and it was better than I thought it would be, pretty mature at times for an early '60s comic, about a teenager who acquires mental powers and begins to work for the government. I don't think Kastle wrote many other comics (I think the only other stuff he wrote was some "Magnus, Robot Fighter" stories).