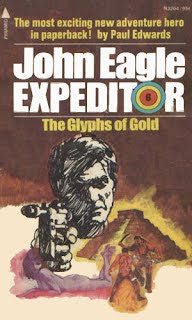 Robert Lory returns as "Paul Edwards" for another installment of the Expeditor series, and, like Lory's previous two offerings, The Glyphs of Gold is a bit too padded, a bit too rushed, a bit too unfinished. But then, practically anything would pale in comparison to the previous volume in the series, Valley of Vultures, by Manning Lee Stokes.

The Glyphs of Gold also displays this series' lack of continuity. In that previous volume, our hero John Eagle traveled to South America where he took on neo-Nazis and also "jungle savages." In this installment Eagle does the same thing -- heading into uncharted regions of Mexico to find a lost Mayan city filled with gold, going up against Nazis and "jungle savages"...and for some inexplicable reason it never occurs to Eagle that it's all so similar to his previous mission.

But then, that's one of the drawbacks of having more than one author handle a series. Really though, the Expeditor lacks much continuity at all. That's not to say I don't enjoy the series, though. As I've said before, this is one of my favorites. It really captures a "pulp for the '70s" feel, with Eagle the alpha male of alpha males, his high-tech costume and gadgetry putting him in a sort of superheroic realm. And, as I've also mentioned before, the Expeditor recaptures the macho/misogynist feel of the old sweat mags of the '50s and '60s, with Eagle flung about to exotic locales around the world while conquering anything that stands in his way.

The narrative starts off a bit involved, but as it plays out The Glyphs of Gold is the simplest offering yet. It develops that three centuries ago a band of Mayan priests and warriors escaped with a cache of gold, taking it into the jungle to hide it from the invading Spaniards. Over the years a legend has developed, that there's a "lost city" somewhere in the Mexican jungles, a lost city teeming with all of that gold. The Tikal Zero codex, left behind by some anonymous Mayan scribe, serves up vague clues on where the city might be. A German scholar believes he has cracked the code...but then he is captured and murdered by his insane (and Nazi) brother, a callous fellow given to grandiose speeches of pristine grammar who travels about with an electric cane and a hunchbacked henchman.

A small circle of Mayan scholars were also on the path to cracking the code, and one by one each of them are turning up dead, murdered by the Nazi. Eventually the story makes its way to Merlin, wheelchair-bound boss of John Eagle. Merlin has a meeting with the Secretary of State; if there is a city of gold in Mexico, and if the Chinese or Russians are also attempting to locate the place, then it would behoove the US to send someone in there, find the gold, and get it out before some enemy power could take it. (Of course, that the gold doesn't even belong to the US is brought up -- by Eagle, of course -- but Merlin brushes it off.)

All of this is setup, and soon enough Eagle is on the scene, posing as a scholar in a crime-ridden hovel of a city in Mexico. Nevertheless he manages to meet a gorgeous gal: Juanita, raven-haired daughter of another of the murdered scholars. It's another of the goofy joys of this genre that Juanita, prompty after meeting Eagle, lets him know that she plans to have sex with him. What makes it even more goofy -- and again displays the chaveunist tone of this series -- is that Eagle treats Juanita like shit for the rest of the book...and she loves it, still coming to his bed every night on the trail as they make their way into the jungle.

And really, that's the brunt of the story. Eagle, safe and cozy in his bullet and weather-proof chameleon suit, travels through the jungle with a local guide and Juanita, who has forced her way into Eagle's party due to her connections with the local police. Along the way they encounter bandits and even a Russian party, one which Eagle quickly disposes of. The Glyphs of Gold follows its predecessor in another way: Eagle makes little use of that chameleon suit and his fancy gadgetry, coming off like a regular men's adventure protagonist rather than the super hero-esque character he was in the first installments.

Once they arrive in the lost city, Lory sort of drops the narrative ball. All along our impression has been that Eagle is hurrying to find the lost city before the murderous German and his hunchback can get there, but once Eagle arrives in the city the story instead becomes a drawn-out deal where Eagle is challenged by the war chief. Why? Because the war chief has the instant hots for Juanita, and so challenges Eagle for "his woman." Again the series displays its leanings as Juanita doesn't have a single line of dialog throughout this sequence, as if her opinion on the situation (or its outcome!) doesn't matter. Which of course it doesn't.

So we have this long fight scene where a nude Eagle must balance himself on a narrow platform, suspended high above sharpened stakes, as he battles against a well-trained foe who basically grew up doing this sort of crap. I kept wondering if the Nazi and his hunchback had taken a wrong turn or something. Even the finale, when it finally arrives, sees a still-nude Eagle fighting against the hunchback as he tries to climb up a pyramid to get Eagle. In other words, the climax too lacks the thrill of its predecessors.

As far as the writing itself goes, Lory holds true to the Expeditor style, in that it can be a little too ponderous and fussy at times, at least as far as the genre is concerned. There is the occasional tendency to over-explain things and to go on for too long, sort of like I do in these reviews. And yet, this "lofty" tone serves to elevate the series in a way, and definitely makes it stand out.  It's an unusual mixture of literature and pulp. I've also found that, while it might seem to drag at timest, I find myself pulled into the narrative moreso than in the other men's adventure novels I've read.

All told, this was an underwhelming installment, with little of the lurid or "cool" factor of previous books. About the only memorable thing was the consistent and frequent usage of the "male mystique" which has been central to the series since the first volume.  I'm looking forward to the next installment, though, which features the debut of Paul Eiden, third and final of the three "Paul Edwards."
Posted by Joe Kenney at 6:30 AM