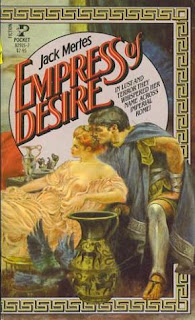 Anyway, I've been meaning to read Empress of Desire for a few years now. This is a late-model release in the genre, which had mostly dried up by the late 1970s. But it's a big fat paperback original which promises a trashy excursion back into the days of Imperial Rome, detailing the sex-filled maneuverings of Poppaea Sabina as she plots to ensnare emperor Nero and marry him, thus becoming empress of Rome.

Poppaea in my mind will always be the ultra-sexy Claudette Colbert (my favorite actress, by the way), as she appeared in the role in Cecil B. DeMille's 1932 sex-and-sin extravaganza The Sign of the Cross: 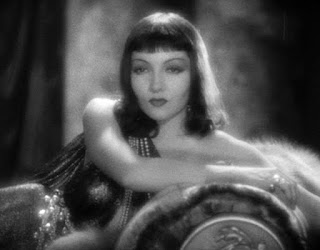 And that's not even a shot from her infamous (and topless) milk bath scene!

Ironically, even though Claudette only appears in about a quarter of the film, her portrayal of Poppaea is more memorable than the one Jack Mertes presents. Claudette's Poppaea is a powerhouse of erotic force who dominates every character (not to mention scene); Mertes's Poppaea is more of a shrill harpie who, if her wiles don't work, throws tantrums to get what she wants. But then, the Poppaea of the film is already empress of Rome. Mertes shows the torrid path she took to get there, though he does take a few liberties with history. Not that it matters - this is fiction, after all.

The majority of the novel is given over to Poppaea's scheming to first meet Nero, and then seduce him. Really though Empress of Desire is in the vein of the sex-filled Romance novels that were all the rage in the late 1970s, with a duplicitous and headstrong female character who thinks she wants power, but it turns out that all she's really been searching for is a good orgasm. There's also the obligatory love-hate relationship, in this case with a gruff horse-breeder named Tigellinus (an actual historical figure, but changed here), whom Poppaea just hates and hates...that is, when she isn't jumping his bones or planning to give up her dreams and marry him.

But Poppaea's sexual antics aren't limited to Tigellinus. Over the course of Empress of Desire she beds a veritable army of men, Mertes never shirking on the good stuff -- though, humorously enough, he likes to employ euphemisms that were all the rage with early 20th century Loeb Classical Library translators: mound of Venus, love-spear, etc. So while it doesn't get full-on Baroness hardcore, the book still packs a hefty punch. Just to give you an idea, Poppaea seduces (then poisons) her present husband while carrying on an affair with the porcine Otho, whom she later marries -- all in a bid to meet Nero. Along the way she manages frequent encounters with Tigellinus, even at one point hooking up with a Gallic barbarian. And all of this is before we even get to Nero!

Mertes though has this super-strange tendency to always specify that the men stink. It's really weird and disconcerting, mainly because it's mentioned in every sex scene. The men either reek of garlic, cheap wine, or just a general funk, and it gets pretty old after a while. Even pampered Nero, we learn, has an unsavory smell about him. Maybe Mertes's theme is that men just stink in general, who knows. But after you've read for the umpteenth time about Tigellinus reeking of garlic as he hops on Poppaea, you've pretty much had enough.

Another strange quirk of Mertes is his occasional attempt to gross us out. There's a sequence where Otho, as a way to teach her a lesson, has Poppaea thrown into the Mamertine prison. After enduring this squalid existence for a few days, Poppaea is freed during a slave revolt. (Here is where she bumps uglies with the aforementioned barbarian, right on the street!) After which Poppaea passes out; it turns out she has contracted some plague from the prison, and over the next several pages Mertes delights in telling us all about Poppaea's vomitous spewings and so forth. Later on there's an even more nauseating sequence where Poppaea gives herself an abortion. I mean, not that I'm squeamish or anything, it's' just that these scenes don't seem to fit into the trashy decadence of the novel itself.

For Mertes proves himself a master of trashy decadence. There are some great scenes here, from when Poppaea rents out a room in a whorehouse in the hopes of fooling Nero into thinking she's the house's prized courtesan, to Poppaea and Nero's later plotting to kill off Nero's family. Mertes generally does a good job bringing to life the torrid world of Imperial Rome, though not with quite the mastery that Sylvia Fraser displayed in her 1982 The Emperor's Virgin (one of those toga porns I read before I started this blog -- and it was a good one). But there are many scenes here that capture the exotic glory of Rome, even an overlong sequence in the Circus Maximus.

Empress of Desire could almost be seen as a psuedo-sequel to Jack Oleck's Messalina. Poppaea's mother killed herself as a result of Messalina's scheming, and Poppaea grew up consumed with vengeance. Poppaea's story is unusual because you know this woman deserved to gain her revenge, but fate robbed her of it -- everyone who deserved comeuppance was dead by the time she reached adulthood. So instead, Poppaea just became as cruel, vindictive, and calculative as Messalina herself; there are many scenes in the novel where she goes into conniptions when someone actually compares her to Messalina.

So, Poppaea sets her sights on Nero, because she wants the power of being empress. She quickly ensnares him, Poppaea's beauty such that Nero is overwhelmed (Mertes skirts over the popular notion -- as intimated by Charles Laughton in The Sign of the Cross -- that Nero was gay), and soon enough she has the emperor eating out of the palm of her hand. Nero, constantly dominated by women throughout the novel, plots the deaths of various people at the behest of Poppaea, who sees all of them as obstacles in her path to becoming empress.

Top target is Agrippina, Nero's mother. Like Poppaea, Agrippina suffered a miserable childhood in which most of her family was murdered, insinuating herself into politics as an adult. And she sees Poppaea using the same wooing tricks on Nero that Agrippina herself used on emperor Claudius. Mertes delivers some awesome soap opera-esque catfights between Poppaea and Agrippina, complete with delicious putdowns and the like. Agrippina is losing her firm hold on Nero, even resorting to incestual propositions in a desperate attempt to keep him in tow.

But those who know their history know that Agrippina's time is limited, and Mertes enacts her famous murder toward the end of the tale, having Tigellinus witness it. (Empress of Desire by the way also takes place around the same time as Lance Horner's Rogue Roman, but in that novel at least Agrippina was busy counter-plotting against her son.)

The title of the novel is misleading in that Poppaea doesn't actually become empress until the last page. Mertes leaves Poppaea's fate unmentioned, and indeed serves up foreshadowing in the narrative that he doesn't follow through on, leaving it up to interested readers to seek out Tacitus or Suetonius. For example, he intimates that Poppea may one day regret having Nero ban her former husband Otho, but never tells us why -- namely, because upon Nero's death Otho himself became emperor for a brief time, and actually ordered the death of Tigellinus (who in the novel as in history becomes the leader of the Praetorian guard). As for Poppaea's fate, which again Mertes doesn't cover, she was killed (accidentally?) by Nero, who either kicked her or fell on her while she was pregnant.

Given that he ends the tale so early in Poppaea's life, Mertes doesn't even get to the well-known stuff. We don't get to see the infamous "Great Fire" of Rome, Nero's Golden House, or any of the other sordid events as recounted by the ancient historians. It makes me wonder if Empress of Desire was planned as the first volume in perhaps a trilogy about Poppaea -- as it is, the novel ends with the fate of all the characters still in question.

In a final note, Mertes thanks several people on the opening page, and closes his acknowledgements with the statement, "This is only the beginning!" Ironically enough, this appears to be the only novel Mertes published. So I guess it was the beginning and the end.
Posted by Joe Kenney at 6:30 AM

Funny, I was watching THE EPIC THAT NEVER WAS last night. It's about the failed attempt to film I CLAUDIUS in the 1930's.

Thanks for the comment. Sternberg's my favorite director, but I'm not sold on his I, Claudius...what remains lacks the spark of Sternberg's work with Dietrich.

Sounds nifty. I've read a buncha toga-porn myself. Dael Forest's Slaves Of The Empire comes to mind. Try Broton The Breeder--probably the best of the series, simply because of that wonky title. Mika Waltari's The Roman deals with some of the same stuff, Nero, Aggripina, etc. I love her line as Nero's henchman are about to kill her. She points to her crotch and proclaims, "Here, let your first strike pierce the womb that gave birth to Nero!"

Muskrat, thanks for the comment. Ironically enough, after years of planning to get around to it, I finally have all five volumes of the "Slaves of the Empire" series on the way, and so eventually will be reading the awesomely-titled "Brotan the Breeder!"

Have you seen Sign of the Cross? I love it, it's by far my favorite historical epic. One half maudlin Christian sappy stuff, the other half like an R-rated trawl into Roman decadence. In fact it's like the R-rated "Quo Vadis."