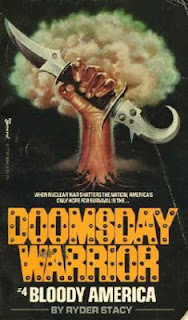 The Doomsday Warrior series continues to build into an epic, with this volume picking up immediately after the previous one. Little explanation is given in regards to what's going on; we meet Ted "Doomsday Warrior" Rockson as he's still making his way back to Century City with Kim, Mt. Ed, and the newly-elected president of the "Re-United States of America." Stacy doesn't bother much with setting up the backstory, which might be frustrating for someone new to the series, but works very well for those who have been in from the ground floor.

The previous volume went more into a New Age/psychedelic territory with the appearance of the Glowers, which leads me to believe that Ryder Syvertsen did the majority of the writing for that one. This volume however is mostly action, goofy action at that, and rendered in the clunky tones that are the hallmark of Jan Stacy. In fact I have the feeling Jan Stacy wrote this installment solo as, save for one or two brief instances, it lacks all of the psychedelic flourishes of Syvertsen. Whereas the first half of previous volumes was usually composed of goofy action scenes and clunky writing (Jan Stacy) before veering off into psychedelia and good writing (Ryder Syvertsen), Bloody America is pretty much goofy action and clunky writing from first page to last.

The title is also misleading, as the majority of the novel takes place in Russia! First though we have Rockson and crew up against a tidal wave of acidic spew which destroys all the flora and fauna in its wake, culminating in a clifftop battle with a hulking lizard thing that beheads Mt. Ed with one fell swoop (goodbye, Ed, we hardly knew ye). After getting back to the neutron-bombed site of the re-election committee from the previous novel, Rockson et al reunite with the "Rock squad," ie Rockson's regular team of Detroit, Chen, Archer, and McLaughlin, who of course survived the nuke attack unharmed.

When a Red recon patrol comes in, Rockson and Archer break off from the pack to serve as decoys so that the all-important president may continue on to safety. Rockson and Archer are prompty captured. Meanwhile Premiere Vassily, who as we'll recall is locked in war with insane KGB Colonel Killov, gets wind that the "Ultimate American" has actually been caught. Vassily believes that if he can get Rockson on his side, the two would prove to be an unbeatable force, and so defeat Killov. Rockson's saved from torture by the fortuitous call of the premiere himself, and posthaste he and Archer are flown in a stratosphere-climbing jet all the way to Russia.

Here we have what might be the only sequence written by Ryder Syvertsen; while on the cozy plane, Rockson mediates and has an out of body experience, taking an astral voyage down to the earth far below. Here he feels the calming vibes of the Glowers and the earth itself. After which the novel gets right back on track, with Rockson going through the motions of working out a treaty with Vassily, just waiting for the moment when he can break free.

Rockson wants to destroy the massive dome which sets outside of Moscow, from which Red technicians control killer satellites that can both fire ICBM warheads and also knock any opposing ones out of the sky (not that any other nation has any nukes left to fire). Rockson knows that the Russians now lack the technical skills to repair it, if it were to be destroyed; the Reds basically just work off of stuff made a century before, becoming lax in their dominance. So upon freeing themselves (of course, not before they can enjoy, in Ryder Stacy-patented explicit detail, the charms of some pleasure-girls), Rockson and Archer head for the dome, hoping to find a way to blast it.

Instead they meet "the dissidents," white haired Russian jazz-lovers who speak in jive (one of them claims to have learned English from jazz album covers!). The dissidents cary clarinets and tubas which are sound-based weapons capable of much destruction. Luckily they too are opposed to the Reds and become instant allies with Rockson. Once again though Rockson is captured and here Bloody America delivers on its back-cover promise: Rockson becomes a gladiator in Moscow's games.

The reason is skirted over; apparently an enraged Vassily wants to use Rockson as an example, forcing him to fight with other slaves against professional gladiators. Rockson gets two weeks of training, though, the weapon given him a "duo-blade" (that's it on the cover). Rockson even sees the opponent that has been arranged for him, a hulking three-armed African mutant who towers over even Rockson and who has a few hundred kills to his credit.

The ensuing games sequence, which comes straight out of Danniel Mannix's Way of the Gladiator, takes up a goodly portion of the novel, complete with maidens ravished by animals, mallet-carrying dwarves braining their opponents, and standard gladiator-on-gladiator combat. Rockson's battle with the African giant is well rendered, and leads to a finale that would've made Spartacus envious. After which Rockson again escapes, and again runs right into the dissidents.

Stacy keeps the ball rolling with more goofy action scenes as Rockson blows the dome, the dissidents blow up the Moscow prison, and then Rockson and Archer escape in a Red fighter jet. Somehow the thing's able to fly all the way over to America, before running out of fuel right over the Great Lakes. Rockson and Archer bail, the Glowers in a brief interlude realize Rockson is back in the US and again state that he's the only person able to hold off the coming darkness (another indication of Stacy's intent that this be seen as an epic, not just another action series), and we leave Rockson as he's parachuting to the soil, happy to be back in the US.

This installment was a lot of fun, and the gladiator stuff is a hallmark of the post-nuke genre, so it was about time Rockson got to fight in the arena. But for me the psychedelic aspects are the best part of Doomsday Warrior, and they were lacking here. To be sure, Bloody America still has the frenetic, oddball charm of the series, but the goofy action scenes just don't work for me...the battle scenes have zero realism, and I'm a guy who doesn't even want much realism in my action scenes. The ones here though are just too unbelieveable, which gives the novel a juvenile tone.

Not that it matters. I'm so caught up in this series that I'll be getting to the next installment soon; in fact I hope to read through the next 15 volumes within the year.
Posted by Joe Kenney at 6:30 AM