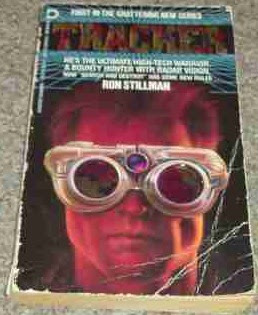 This must've been one of the last gasps of the men's adventure genre, and what an ignoble death it was. Even the cover belies its true roots, making Tracker look like some sort of military sci-fi deal. But the misleading cover is the least of the book's problems. Simply put, Tracker #1 suffers from some of the most juvenile prose, plotting, and dialog I've yet encountered -- men's adventure or not. This is the sort of book that actually contains sentences like: The following morning, Natty hopped in his F-15E and headed for Colorado Springs. It's as if the novel was written for kids, by kids.

What's especially strange is that amid the childish mentality there are acts of total savagery. Women are raped in graphic detail and killed. Then we'll have scenes with our hero hobknobbing with Navy SEALs and joking around. Yes, this is one strange book. I'd hoped for something along the lines of TNT -- also published by Charter Books, and also sort of a spoof of the genre, going to insane extremes. But at least TNT was written (make that "translated") well. Snatches of Tracker #1 are well-done, but on the whole it falls flat. And hard.

The major problem is our hero, Nathaniel "Natty" Tracker. The man is too idealized, even given the genre. Tracker can do no wrong, and always comes out on top. He's more invincible than Superman. Even when he suffers he's still in charge; there's a scene where he's captured and his finger is cut off, and Tracker still makes jokes about it...while it's happening. He's so cocksure and arrogant that he annoys the reader.

Tall, muscular, handsome, and a genius to boot -- whereas other men's adventure protagonists at least have a sort of "Q" who develops their gadgets, Tracker does it all himself. Hell, he's even a self-made millionaire! Tracker's gimmick is that, in the beginning of the novel, he's rendered blind in a car crash. The reader knows what he's in for when, in the very next scene, Tracker awakens in the hospital, discovers he is blind...and proceeds to hit on and then sleep with his attendant nurse.

Nothing fazes Tracker; soon enough he has devised high-tech sunglasses which allow him to see again. (They apparently look nothing like the goggles on the cover, though.) A former Air Force hotshot pilot, Tracker uses his government connections to become a sort of undercover commando; he will go on dangerous missions the government wants kept secret. His first assignment is to infiltrate into Libya and rescue a downed pilot, a guy named "Rabbit" who happens to be Tracker's best bud.

Rabbit's kidnapper is The Ratel, a South American revolutionary who works as a mercenary. He's been hired by Qadafi and now holds the downed pilot in a fortress in the Libyan desert. Tracker flies in on a contraption of his own devise, straps on his Mac-11s, and kills a bunch of Libyans. The action scenes come fast and furious and aren't grounded in the least by reality. Setpieces go down that would look unbelieveable even in the fantasy world of a summer blockbuster. And again it's all rendered bland because Tracker can do no wrong and it's never in question that he will defeat the foe and save his pal.

But in true fashion it's Tracker's companions who suffer most. Tracker's ostensible girlfriend, Fancy Bird (!), also gets captured by Ratel, who proceeds to rape her. This sequence is very much at odds with the tone of the novel. Tracker vows revenge and goes about attaining it. Another head-scratcher is the anticlimatic end, which goes on and on and on, detailing Tracker's (eventual) escape from Libya.

Tracker #1 also shows the complete neutering of the men's adventure genre. Published in late 1990, the novel suffers from the burgeoning "politically correct" movement. For example, in an early sex scene it's inferred that Tracker wears condoms. It's difficult to imagine say John Eagle Expeditor pausing to slip on a Trojan before getting busy. And similar to the Expeditor, Tracker was raised by the Apache -- only Stillman is careful to refer to them as "Native American," and speaks of them with total deference; a far cry from the talk of "Indian savagery" one encounters in the Expeditor books! And finally, later in the novel Tracker is awarded a million dollars by the US government for achieving one of his missions. Tracker donates half of it to AIDs research. There are a hundred things I could see Johnny Rock doing with half a million dollars, but that isn't one of them.

Such things show how much the genre (and the times!) had changed within two decades. But then, men's adventure novels were known for going over the top. The lurid nature was part of the charm, and I'm betting most readers never took these books seriously, anyway. Trying to tone the genre down into a "softer, gentler," more socially-conscious sort of thing can only lead to failure. If anyone wondered why men's adventure novels dropped by the wayside, then Tracker #1 offers many clues.

I want to say the novel's a spoof, but slogging through it you have to wonder. It would be one thing if Tracker was a parody of the superheroic men's adventure sort of protagonist, but the parody isn't fully carried through...leaving the novel a muddled mess. But there are things that make you wonder -- like when Tracker meets some Libyans who beg him to convince the President to have the US military invade Libya!

Anyway, the series lasted 8 volumes, and I have them all. Later installments appear to be more pulpish, so here's hoping. "Ron Stillman" by the way is Don Bendell, a writer and poet. Bendell wrote the first 6 novels, then was replaced by someone else who finished up the series with the final 2. Whoever it was, he couldn't have done much worse.
Posted by Joe Kenney at 8:29 AM

Wow. Yeah...that's pretty ridiculous. And you hit it right on the head; it's as if once the Berlin Wall fell, men's adventure novels immediately pussed out and became some sort of crappy self-referential parody of themselves in a weird attempt to keep clinging to life just a little while longer...with sad results.

Time to hop in my Apache attack helicopter and go grab a cup of coffee next door.

A couple of questions (if you can stand it):

1) Does Tracker share his "high-tech sunglasses" with the rest of the world, perhaps making a trillion dollars in the process, or does he just keep it to himself?

2) Assuming the latter, is the government not concerned that Tracker's device could fall into enemy hands? (And what about hiring an undercover commando who might be rendered blind by a well-placed slap in the face?)

It sounds like the THE BIG ENCHILADA, a satire on super hardboiled detective fiction that came out in the 80's. Except there was no attempt at being socially conscious.

It would seem that the idea was to make men's action version of the "techno-thrillers" that were popular at that time -- Tom Clancy et al -- but boy, the execution was certainly botched.

There's some hilarious stuff in later volumes though. Don't give up. In one, while hanging from a balcony, he deters an attacking ninja below by peeing in his eyes.

Jack, you made me laugh out loud with your "Apache attack helicopter" line. Nice one!

Brian -- as I recall, Tracker decides to keep those glasses to himself for the very reasons you bring up: so they don't fall into the wrong hands. Apparently they look like regular sunglasses, as a pair of SEALs who pick Tracker up in Libya wonder why he's wearing "Foster Grants" in the middle of the night. Tracker by the way made his millions through other gadgets and devices he created for the military before he was rendered blind. And it's funny your bring up the latter point: a subplot in "Tracker #1" concerns a duplicitous gov't guy leaking out the story of Tracker's blindness to a National Enquirer sort of rag, and the villain, Ratel, gets wind of it and uses it to his advantage. However the outcome's never in question due to Tracker's inhuman invincibility.

Tim -- I'll be sure to check out the Big Enchilada. Thanks for mentioning it, it's a new one to me.

English Teacher X -- thanks too for your comment; you've confirmed my suspicions about later volumes. I looked through some of them and the plots seem more over the top and intentionally goofy. Maybe you're onto something: maybe Charter/Diamond wanted a sort of Tom Clancy thing, and so Bendell catered to the publisher for the first volume...giving us a book which, as you so aptly put it, was certainly botched. I'll keep reading the series, though!

Bendell is also a filmmaker. I wrote about his picture THE INSTRUCTOR here:
http://craneshot.blogspot.com/2007/05/chopsocky-bob-chaney.html

Bendell read my post and wrote me a very gracious email giving some background on the film. I'll see if I still have that email someplace.

Yep, found the email. You can find Bendell online at www.donbendell.com. He was apparently ripped off by Shapiro/Glickenhaus (wouldn't be the first to claim that) of profits from THE INSTRUCTOR. I thanked him for being a good sport concerning my snarky review, and he said he wasn't offended. He also was apparently planning a film with stuntman Dar Robinson, who died before that could happen. Bendell is a little too far to the right for my tastes, but he seems like a standup guy from my brief interaction with him.

Marty, thanks for the posts. I didn't know Bendell aso worked in film. I definitely intend to keep on with his Tracker series...I'm sure it will get better.

I was an aircraft maintenance administration clerk in the Marine Corps when this POS came out, and one thing in the book jumped out at me: not one piece of Tracker's F-15 had a serial number.

That killed my suspension of disbelief. Airplanes fly on two things: jet fuel and paper. Lots and lots of paper. My job consisted of tracking all that paper. The parts have part & serial numbers for really, really good reasons.

Men's adventure didn't have to die out--hell, the 1990s could've been a Golden Age of the genre, with the end of the Cold War unleashing all manner of potential stories--but the authors didn't have enough creativity or willingness to move with the rhythm of the times.