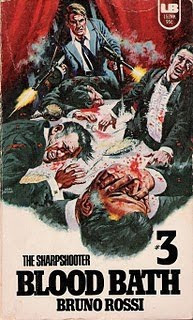 Good lord! If I had known this volume of The Sharpshooter was so lurid, so exploitative, so friggin' twisted, I would've read it a whole lot sooner. The only men's adventure novel I can think of that comes close to this level of graphic sleaze would be Gannon #1, but I'd say Blood Bath is even more twisted; at least Gannon had some semblance of humanity about him, and he was fighting for a cause. Johnny "Sharpshooter" Rock however murders, tortures, and maims throughout Blood Bath, usually for no reason at all.

It's obvious from the start that this "Bruno Rossi" is different from the others who penned the previous two volumes. The prose is rough and run-on sentences prevail. The occasional sentence I had to re-read as it was such a confused mess. But on the positive side, this "Rossi" doesn't shrink from describing graphic brutality -- in fact, Blood Bath is more of a horror novel than action. There are only one or two shootouts, with the majority of the "action" given over to Rock murdering unarmed opponents or knocking them out with chloroform and taking them back to his hideout so he can torture them for info. And then murder them. Rock is once again more depraved, cruel, and "evil" than the mobsters he wars against.

The "horror" connection shows itself in the opening pages, when Jessie Armstrong, a black guy who works for the FBI but is secretly an informant for the mafia, hides in a mob "safe house" while on the run from Rock, who has discovered him. (I mention that Armstrong is black because Rossi reminds us about a zillion times, so it's now stuck in my brain.) In this dank, rotting house in the Jersey wildlands, Armstrong awakens in the dead of night, disturbed by a constant dripping sound. Turns out there's a mutilated corpse hanging in the basement, half-eaten by huge rats. Alley cats lap up the pools of blood while Armstrong watches in shock. Rossi delights in graphically describing the bloody mess, the feasting rats. Rats are all through Blood Bath; these particular rats in fact are basically co-stars in the lurid tale, so all those who have a rat-phobia should steer clear of this particular installment of the Sharpshooter series.

Rock, due to his omniscient powers, has of course tracked Armstrong here and so captures the guy and takes him to his own safe house, off the Jersey shoreline. Here Rock ties up Armstrong and his mistress, shackling them in a boathouse and placing a cage full of those rats right beside them. Eventually he spreads food through the area and then opens the cage so the rats can run loose. This is only the tip of Rock's psychological torture; later on, when he murders a few of his captives, he tosses bodyparts or entire bodies to the rats, so they can eat them right in front of the other captives.

Rock's mission this time out is to crush a Jersey mafia family. I had a hell of a time keeping track of the various members, but it seemed Rossi did, too. Also it didn't help that not once in Blood Bath do we see the "bad gus" do anything bad. Late in the game we learn that one of the bosses is known for a sadistic streak (he's got nothing on Rock, though), and also toward the very end the mobsters apparently kill a beloved cop so they can lay the blame on Rock and therefore set him up, but we never see them do it. Instead, the mobsters come off more like the innocent here, with Rock a murdering automaton who blitzes his way through their ranks.

Really, this is torture porn more than anything else. It has a definite dark humor, though. Armstrong strikes up a friendship of sorts with Rock -- while chained in the boat house, remember -- and often comments on Rock's sadism. In particular there's a laugh out loud scene where Rock, moments after capturing a high-ranking mafia lawyer, blows the guy's head off in front of everyone. "That does it for him, huh?" says Armstrong. More twisted and goofy fun is had with Luci Sordi, a mobster's wife whom Rock also captures; she goes out of her way to turn him on, trying to come on to him and sway his mind. But Rock is single-minded and ignores her, as human as an actual rock.

Once again Rock comes off as the perfect killing machine, his plans going off without a hitch, and never once coming into any danger. He blows up mobster-owned mansions and trucks, kills various stooges. Then he goes back to his boathouse with its growing collection of captives and tortures them for more information. Another incredible and insane sequence has Rock handcuff Luci to another mobster stooge and then orders them to walk across a fetid marsh. The two are panicking as they're sure Rock is about to shoot them in the back. Instead Rock takes an Uzi and blasts the guy's arm off and then stitches him up and down each side, blasting his body into shreds. Luci of course freaks out, covered in blood and with a severed arm hanging from her wrist no less.

It was at this point that I realized that, despite being the titular character and protagonist, Johnny Rock is not the hero of this series. I'd already noticed that "Rossi" spent more time getting into the heads of the "villains;" one of them, an elderly mobster named Da Vinci, is the most colorful character in the book, more alive than Rock is. However Rossi doesn't much get into Rock's head, instead describing his various murderous and torturous actions. I often wonder about novels like Blood Bath. The majority of its readers were probably blue-collar guys who despaired over how the US was going to hell and sought an outlet for their repressed rage; they certainly found it in The Sharpshooter. But I wonder how seriously the authors took their own work. My guess is that the majority of lurid stuff like Blood Bath is just the work of an author seeing how far he can go to please the twisted whims of his readers.

Anyway, that's my theory -- and it seems further justified in that there is no resolution to the main plot. I mean, what happens to Da Vinci? Throughout Blood Bath he sits on his expensive yacht and tries to figure out Rock's strategy. We never find out if Rock kills him during his final assault. Also, the entire bit with Luci Sordi is bizarre beyond belief; despite being psychologically tortured throughout Blood Bath, she still throws herself at Rock and is even there for him at the end. And then there's Jessie Armstrong...he just disappears at the end of the book, apparently saved by someone (Da Vinci?), but Rock never finds out who, or even where he went. So it's as if the whole "war against the Jersey mafia" is just a convenient frame upon which Rossi can hang various scenes of graphic torture and murder.

But I'm not complaining. Part of the fun of The Sharpshooter is just how damn mean and nasty it can be. I like to think it's a parody of Don Pendleton's Executioner series, but who knows. If you're looking for a twisted dose of mobster-killing fun (and you're not squeamish about rats), give Blood Bath a shot. It's also got probably the best cover I've ever seen on a men's adventure novel, courtesy Ken Barr -- unfortunately the scene depicted doesn't actually happen in the book.

3/1/12 UPDATE: As stated in my review of The Marksman #3: Kill Them All, I'm now certain that Blood Bath was written as a Marksman novel, only changed at the last moment to become an entry in the Sharpshooter series. As I detail in my review, Kill Them All is actually a sequel to Blood Bath, and definitely written by the same twisted author.

3/9/12 UPDATE: After a lot of research, I've determined that this novel was actually written by Russell Smith!
Posted by Joe Kenney at 8:44 AM

I know. This book (and cover!) is incredible. I wish more was known about these books and their authors so we could find out what was going through their heads. My guess is that "Rossi" wrote this over a weekend with no other purpose than a paycheck. I doubt it was even plotted...he just started typing.

One thing I especially love about that cover is... it's the same freakin' mobster again and again! They all have the same face and the same clothes. I even started to wonder if it's not supposed to be some kind of "action shot" depicting one guy flopping around the room as the bullets tear him up. One of Rock's guns is a Thompson, and those'd toss a guy around a helluva lot. Anyway, I recently snagged this book but haven't read it yet. Can't wait now! :)

Keep up the good work, this is one of my favorite blogs.