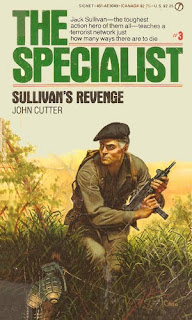 I'm happy to report that with this third volume The Specialist series improves in a big way. I complained in my reviews of the previous two installments about the needless padding, the overblown and unnecessary descriptive detail, the lack of novelty in the action sequences. But "John Cutter" (aka cyberpunk/horror novelist John Shirley) pulls a 180 here and delivers by far the best volume yet.

Jack "Specialist" Sullivan is a top mercenary who takes jobs for those who have been injured or damaged in some way; in other words, he works for the little guy. Sullivan does so because he himself has been injured; his wife was killed years ago in a bombing which was intended to kill Sullivan himself. He has spent these years trying to find out who was behind the bombing; in the first volume of the series he killed the man who actually planted the bomb. In the second volume Sullivan picked up leads on the man who hired that bomber -- a mythical terrorist leader called the Blue Man (who appears to be unaffiliated with the group that bears his name). Sullivan has finally tracked down the Blue Man, discovering that he runs a terrorist-training compound hidden in the wilds of Utah, right here in the US.

This time, then, Sullivan himself is the client, and so hires his handler Malta to gather together a strike force to help in a raid on the compound. Malta brings in Merlin, a wiry explosives expert, and Horst, a shit-kicking German. On their first night in Utah, enjoying a beer at the local redneck bar, Sullivan and Malta are attacked by a few racist locals. This leads to an endless and grating subplot in which two of the hicks plot their revenge -- but, surprisingly, this subplot leads to disastrous and series-changing consequences.

The novel doesn't really pick up until halfway through, when Sullivan goes undercover into the Blue Man's compound; Sullivan's cover name is a definite in-joke, "Richard Stark." Here Sullivan finally meets his enemy face-to-face...or maybe that should be "face-to-skull." The Blue Man gets his moniker from a blue skull which was tattooed on his face years ago when he was captured by enemy forces. There are all sorts of horror connotations in Sullivan's Revenge: one of the terrorists has a mutilated face, his nose blown off, and Shelley delights in describing this detail. Then there's Tora, the Blue Man's daughter, a nubile half-West Indies girl in her mid-20s whom Shelley refers to as a "witch," and not in the figurative sense.

The Blue Man doesn't recognize Sullivan, and Sullivan gambled he wouldn't, anyway; the Blue Man just took a job and sent someone out to do the actual bombing, he had no grudge or even awareness of Sullivan himself. Hence, though Sullivan has killed the actual bomber and now intends to kill his hirer, he still doesn't know who actually hired the Blue Man himself. This is Sullivan's second objective: to find any files the Blue Man has kept and discover, finally, who ordered his death all those years ago. However the Blue Man isn't the man he used to be, his brain addled by heroin spiked with cocaine. He stumbles about the compound in fogs of delusion like some absinthe-chugging 19th century poet.

Tora, the Blue Man's daughter, appears to be the true power here. Basically the only thing the Blue Man does is order Sullivan to undergo a "test" to ensure he's fit to be a trainer in the camp. This is an overlong but entertaining sequence in which Sullivan disregards his orders not to kill his opponents and goes into a red fury, smashing them apart with a makeshift spiked mace. But after this the Blue Man fades into the background and Sullivan becomes more concerned with Tora, whom he gradually develops feelings for. Tora has slept with all 50-some men in the compound (terrorists from around the world, the lot of them), but has only slept with each of them once. Sullivan however, as can be expected, is something "special." Tora can't get enough of him and Shelley provides a few graphic sex scenes.

Meanwhile Sullivan plans his attack. The terrorists in the compound are a mixture of IRA, PLO, the works. The rule is that politics are not to be discussed here; the men are here solely to learn how to kill. Sullivan gathers together the PLO fanatics and starts spreading gossip -- he tells them half of the camp is part of "the Zionist Conspiracy" and is against them. Shelley delivers a lot of dark comedy here, as Sullivan works the PLO terrorists into a froth.

It all ends with a big battle scene, one which thankfully isn't as tepid as those in the previous two volumes. And, as mentioned, we learn later that more damaging things have occurred in Sullivan's life, things he doesn't become aware of until the final pages. Also, thanks to the Blue Man's files, Sullivan finally learns who exactly ordered his death years ago. This leads to a last-second denouement in which Sullivan gains his vengeance; we literally learn who the culprit is just a handful of pages before Sullivan kills him.

This leads me to wonder, because already by the third volume Sullivan has gained the vengeance he's sought. I had assumed this would be a long-simmer sort of thing, with Sullivan perhaps not even gaining vengeance until the final volume. Also, those "series-changing consequences" mentioned above come into play in the last pages. All told, Sullivan's Revenge could just as easily have been the finale of the series itself, which makes me wonder if Shirley (or Signet Books) was unsure if the series would last beyond three volumes and so wanted to wrap it all up in case it didn't.

Who knows. At any rate the series chugged on for another 8 volumes, and I look forward to continuing on with it, now that it appears Shirley has found his bearings in the world of men's adventure fiction.
Posted by Joe Kenney at 8:32 AM

Just wait until our hero suffers a head injury that causes him to go into fits of ultra-violent rage, making him (at one point) pick up a motorcycle and crush a man to death with it.

Love it! I am a Mack Bolan fan of The Executioner series. You are invited to come by and check it out at www.squidoo.com/executioner-book-series.com. I have a few other books including this one as part of the genre.

Unfortunately, I just can't get into the Mack Bolan/Executioner series, though I have read a few good stories in that one. I did read the first story in The Specialist series, and thought it was okay. I have #3 Sullivan's Revenger, and will start the book today. From the review, it sounds like something I will like. http://pulplair.blogspot.com/

I keep bringing this up when it comes to femme fatale characters in these books, but can anyone here give me "spoilers" about what happens eventually with the "Tora" character?
(Somehow the description makes me think the book probably takes that "Goldfinger" route by having her won over by the Sullivan character, but I'm not sure.)

Grant, I really can't remember what happened to Tora. I want to say she died, possibly in the final fight on the Blue Man's compound...I seem to recall she'd taken over power in the compound, or something along those lines.