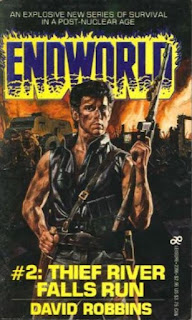 Endworld, Blade, Deathlands, and Outlanders always confused me. I could never remember which one was which and which ones were related. I think I have read about one volume of each max.
Maybe, besides the setting, that was the common denominator that confused me - lack of interest. Like you said, too YAish.