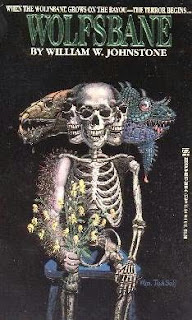 Would be curious to hear your thoughts on Johnstone's "Ashes" series, as those seem to fall more in line with the general theme of the blog. I've got probably the first six or so, but their daunting size has turned me off for the time being.

Surprisingly enough, I received this book in a box full of books I bought this weekend. I haven't read it, yet, and aren't in any rush. I do like THE NURSERY, though.

And I'd like to see your take on the ASHES series, too. I read all of those save for the last title (not sure why I'm holding off), but would always be interested to read your reviews on the stories.

I dipped my toe in William Johnstone post-apocalyptic writing a number of years ago. I believe it was a standalone.

Amazingly bad stuff. And we are talking a genre where the norm is cardboard characters, political sermonizing, and a complete misunderstanding of what it would actually take to survive in an apocalyptic world. Your typical zombie-apocalypse is more realistic than most kindle-driven prepper writers.