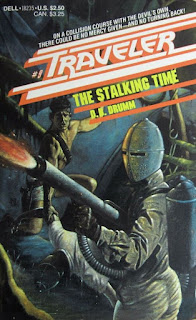 ROADBLASTER is, indeed, awful. I've never read any of the TRAVELER series, and I'll have to rectify that. Need to finish up THE LAST RANGER first, though.

Did someone say my name?

Speaking of The Destroyer, I know it isn't exactly a favorite series here, but are there plans to review any others?
I'd especially like to hear opinions of # 2, # 6 and # 23.