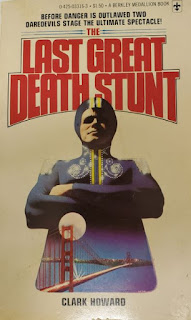 A novel about death-stunts... that shows almost no death-stunts! Gotta love that. It reminds me of some old Jess Franco movie -- I forget which one, but it was a war movie. One of the guys in the squad was called "The Acrobat" and they talked a lot about how in combat he jumped over things and ran around climbing things and doing flips and was just super-crazy-awesome. Then in the first scene "The Acrobat" gets machine-gunned in the legs before he gets a chance to do anything. Hey, it's cheaper than hiring an actor who can really jump/climb/do flips, etc.

By coincidence, over the weekend, I read a Clark Howard novel, THE KILLINGS. It's basically a '70s buddy cop movie without humor and with quite a bit of sleaze and grime and nihilism. It's right up your alley, Joe!

Thanks for the comments, guys! I haven't seen that movie OR read that book, so I'll look out for both of them. But Marty your description already makes The Killings sound better than The Last Great Death Stunt!

"as I sure would’ve preferred a “futuristic 1970s” than the actual future we got. It’s sort of like the Buck Rogers TV series that came on around this time."

I agree with that. And the Buck Rogers TV series was awesome.

I haven't really tried much 1970s pulp fiction (I'm heavily into 1950s pulp) but The Last Great Death Stunt did sound like a very promising idea.